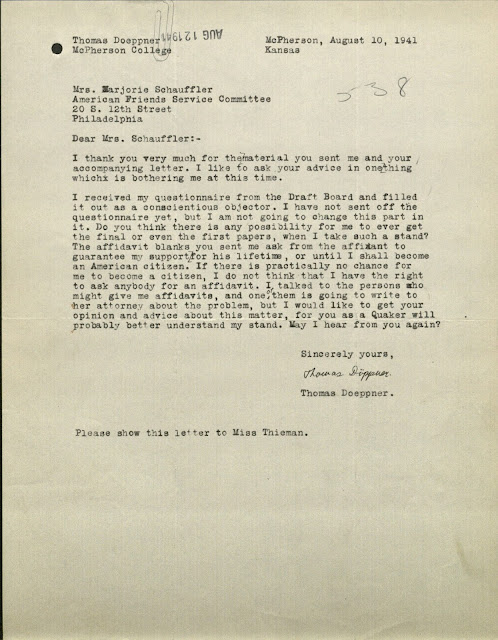 Letter from Opa to Marjorie Schauffler of AFSC

I thank you very much for the material you sent me and your accompanying letter. I like to ask your advice in one thing which is bothering me at this time.

I received my questionnaire from the Draft Board and filled it out as a conscientious objector.  I have not sent off the questionnaire yet, but I am not going to change this part in it. Do you think there is any possibility for me to ever get the final or even the first papers, when I take such a stand? The affidavit blanks you sent me ask from the affiant to guarantee my support for his lifetime, or until I shall become an American citizen. If there is practically no chance for me to become a citizen, I do not think that I have the right to ask anybody for an affidavit. I talked to the persons who might give me affidavits, and one of them is going to write her attorney about the problem, but I would like to get your opinion and advice about this matter, for you as a Quaker will probably better understand my stand. May I hear from you again? 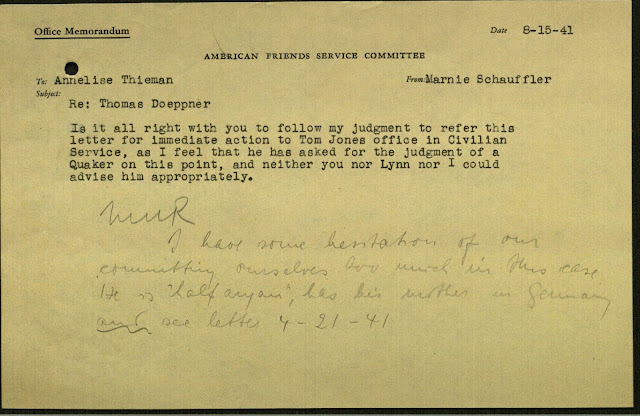 Memo in AFSC between Marnie Schauffler and Annelise Thieman

To: Annelise Thieman  From: Marnie Schauffler
Subject:
Re: Thomas Doeppner

Is it all right with you to follow my judgment to refer this letter for immediate action to Tom Jones office in Civilian Service, as I feel that he has asked for the judgment of a Quaker on this point, and neither you nor Lynn nor I could advise him appropriately.

handwritten note:
**
I have some hesitations of our committing ourselves too much in this case. He is "half aryan," has his mother in Germany and see letter 4-21-41 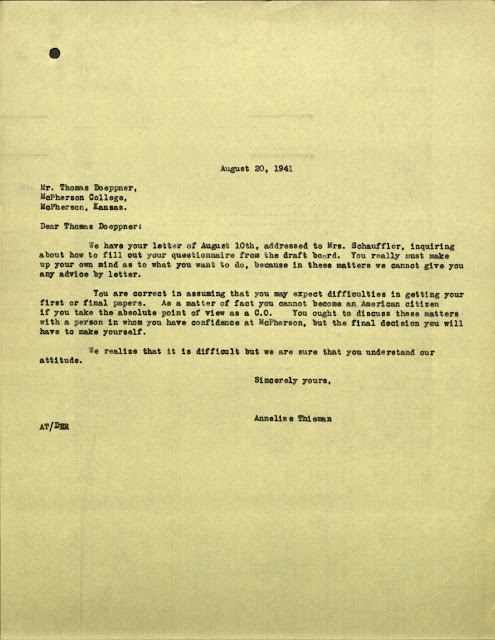 Letter from Annelise Thieman to Opa

We have your letter of August 10th, addressed to Mrs. Schauffler, inquiring about how to fill out your questionnaire from the draft board. You really must make up your own mind as to what you want to do, because in these matters we cannot give you and advice by letter.

You are correct in assuming that you may expect difficulties in getting your first or final papers. As a matter of fact you cannot become an American citizen if you take the absolute point of view as a C.O. You ought to discuss these matters with a person in whom you have confidence at McPherson, but the final decision you have to make yourself.

We realize that it is difficult be we are sure that you understand our attitude.

Let me begin this post by pointing out something that Annelise and Marjorie missed. Opa was not asking them if he should fill out the form of conscientious objector. He was asking them what the consequences would be, so that he would not unfairly burden those who had signed up to be his affidavit. The people who were signing an affidavit of financial support were pledged (by law) to support him if he needed it for life or until he became a US citizen. He considered that his chances of becoming a US citizen were slim to none, especially and particularly if he made clear his position as a conscientious objector. He wanted them to weigh in, not on his decision, but on the consequences. He anticipated that they would understand his decision because he assumed that they were Quakers.

So here we find out that Marjorie and Annelise are not Quakers. This is not surprising, there are lots of non-profits who employ people who are not of the ideology of the founding group (Catholic Charities for example). Marjorie and Annelise are aware that they cannot respond as Quakers and have integrity with that. They did not know what to do in response to Opa's letter. I think the fact that they inserted the idea that he was questioning whether to be a C.O. or not is telling of what they thought he should do. Marjorie wants to forward the letter to a person who seems to be a Quaker and be able to advise on these matters. Annals has another opinion- and that is that no one should be advising on this matter at all. Her handwritten note (I am assuming it's Annelise's note) points out just how precarious Opa's situation is. He's half-Jewish, his Jewish mother is in Germany, and the letter that was referred to- yeah- that's the German consul who was so graciously reminding Opa of his responsibility to report for duty in the Nazi army. I feel a little bit like Annelise is saying that this whole thing is a hot mess no matter what you do- and to advise at all would be too risky.

Annals ends up writing Opa back saying that they can't advise him on whether he should be a C.O. (even though he didn't ask that question). She does confirm that if he 100% claims C.O. that he can't become a US citizen. That actually surprised me a little bit, not when I think about it- but that seems unfair that the chance at citizenship for Opa could be denied because he happens to be a male of service age who doesn't want to be in the Army.

Now here is where it gets really interesting and I think about all sorts of things that can't be affirmed because I don't have Opa in front of me today... Let me show you two quotes from Opa's autobiography which was written in 1997, after Opa served in the US Army for almost 30 years:

I was just as sure that if I would ever become involved in the military, it would be  against, not for, the Nazis.


Let me tell you at the outset that when I finally came to America I went to college; and as soon as I graduated, I volunteered for military service. I am proud to have worn the uniform of an American Officer in our fight against the Nazis.

Here's another tidbit- in conversations with Opa's niece, I would learn that he and she had a strain in their relationship during the Vietnam War. They disagreed about it and that disagreement was hard for them (as I'm sure it was for many family members who were on opposite sides of the argument in that time). The tension eased over time and was not the lasting word on their relationship, but it makes me really wonder what happened between the time of this letter when Opa was unquestioningly a C.O. and when he joined the Army and argued for the Vietnam War.

Obviously, people change. Obviously, there is no way I can know for certain how things shook out here. I think we'll find out more about what happened and how Opa came to join the military. I have an idea but the letters will give us a more intimate look.

But here's the thing, in retrospect, Opa completely glossed over his stint as a C.O. He either didn't remember it or forcibly forgot it. Here's where I start guessing about things I don't know anything about. I wonder if Opa felt guilt or shame about his ideals as a young man. Guilt because perhaps he thought his stand was a road-block for his mother coming to the United States. Shame because after 30 years in the military, I can imagine C.O.'s are a thing of severe ridicule.

I wonder if Opa stood so solidly by the US in the wars (in Vietnam and Korea) because to show any questioning meant to question his service, his decision to join. The question would bring back what could have been a painful reminder of a decision he made to be a C.O. which might have cost him and his family time and effort in the immigration process. Maybe remembering his Quaker ideals meant remembering a painful part of his past, his home country that was ripped apart and could not be saved by his ideals.

I don't really know - and maybe there was nothing there except that we don't remember our changing views as we grow up. I do find this very compelling though, I can't quite put my finger on it.

I understand Opa's dilemma in the sense that I get what it feels like to take a stand and yet wonder if now is the time that it is important to make that stand. In this situation, as I am right now, I think I would have lied. I would have filled the form out the way it needed to be and hoped that my sacrifice of my principles was worth it. Anni Halle wrote about this in her book "Our Thoughts Are Free" - she was a Quaker in Nazi Germany and she and her family worked tirelessly against the Nazi regime. But they would throw out a Heil Hitler salute when necessary. She called it being wise as serpents. Because they were able to keep helping people if they did enough to keep the target off their own backs.

This sounds like justification, but unless you've been in these absolute life and death situations, I think it is unfair to make theoretical judgments. In philosophy classes we would talk about a lot of these worst-case scenarios when you have to put your moral choices to test. If it is NEVER OK to lie, then you are forced with the situation when the Nazis come to the door and ask if you have a family hiding in your basement. In that case- to me- I say lie your silly head off. But that's just me right now.

People change. Views change. I guess it's important to give ourselves space and grace to do that. And remember where we came from and recognize that we might be going somewhere different than what we expect.