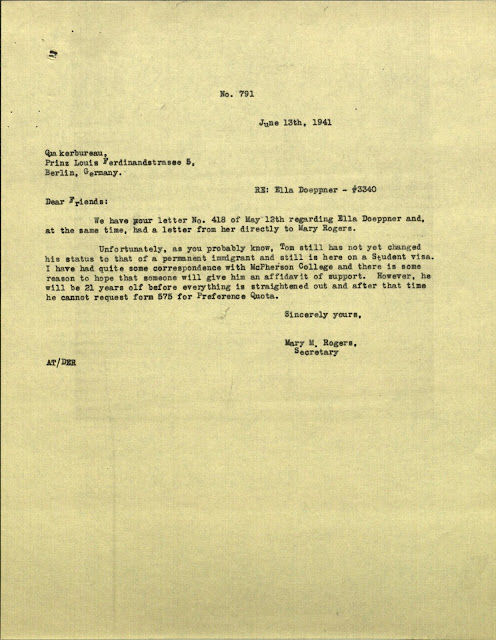 Letter from Mary Rogers of AFSC to Berlin Quakers

We have your letter No. 418 of May 12th regarding Ella Doeppner and, at the same time, had a letter from her directly to Mary Rogers.

Unfortunately, as you probably know, Tom still has not yet changed his status to that of a permanent immigrant and still is here on a Student visa. I have had quite some correspondence with McPherson College and there is some reason to hope that someone will give him an affidavit of support. However, he will be 21 years old before everything is straightened out and after that time he cannot request form 575 for Preference Quota.

That was a short letter with not much good news. Mary is short and snarky, and a bit false on some facts. Let's start by correcting a couple of those: first- Opa is not on a Student Visa, he was supposed to be, but somewhere along the line he received a visitor's visa instead. That Visa has expired. Second- He is already 21 years old, his birthday was May 22, so he just turned 21.

I'm actually a little frustrated. The way Mary wrote this letter and the way Annelise has been writing to Opa- you would think the whole thing is his fault. However, from what documents we have- there was never any indication that Opa  should change his visa status to a permanent immigration until very recently. Also, he applied for a renewal of his visa and was refused based on a clerical error that has yet to be rectified. Then there is this special form 575 preferential quota, which I'm guessing might be the one that allows Opa to demand his mother come to the United States. Perhaps it was so minors could request to have a parent live with them? Either way- I never heard about it or the specifics and the deadline of Opa's 21st birthday, so I wonder if he knew anything about that. Opa may have been stubborn about going to Cuba, but I feel like the AFSC may have dropped the ball a little on this one, and it annoys me that they are acting like Opa dropped the ball.

I think ultimately I'm just frustrated, because all these little rules and policies and deadlines are giant boulders thrown in the way of Opa and Ella's freedom. Who can navigate this system?! It's ridiculous.