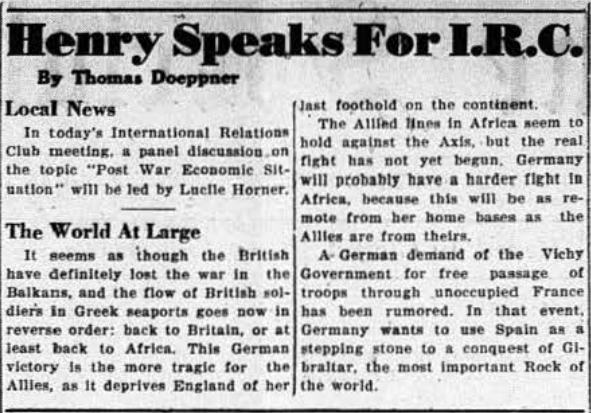 In today's International Relations Club Meeting, a panel discussion on the topic "Post War Economic Situation" will be led by Lucile Horner.

It seems as though the British have definitely lost the war in the Balkans, and the flow of British soldiers in Greek seaports goes now in reverse order: back to Britain, or a least back to Africa. This German victory is the more tragic for the Allies, as it deprives England of her last foothold on the continent.

The Allied lines in Africa seem to hold against the Axis but the real fight has not yet begun. Germany will probably have a harder fight in Africa, because this will be as remote from her home bases as the Allies are from theirs.

A German demand of the Vichy Government for free passage of troops through unoccupied France has been rumored. In that event, Germany wants to use Spain as a stepping stone to a conquest of Gibraltar, the most important Rock of the world.

It seems Britain is now on the defense, tracing her steps back and hoping to hold down the fort until she can get back in. Germany has plans to run amok on the European continent, and so far it is unsure just how easy that will be. If Germany can march unencumbered through France and be allowed access in Spain (the country that has fought with them before, although they didn't allow them airspace recently)- then the target is: Gibraltar. I confess, I have heard of the Rock of Gibraltar and had no idea where it was.

SO here's a map, the red thing points to Gibraltar. I want to include the surrounding area to show its importance geographically. (This map is a google map of the current map of the world): 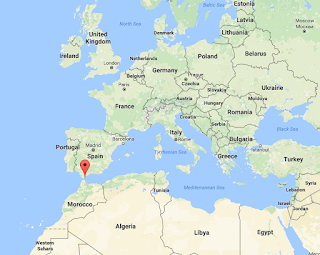 So you might not be able to see perfectly, but that red dot is on a peninsula that juts out into the strait of Gibraltar, which is a very important strategic spot. Especially if you consider that anyone from England who is trying to get war ships into the Mediterranean HAS to use that tiny space. It's helpful if your friends are posted there for protection. Also- very interesting and smart that Germany would be invested in Spain being their allies or at least friendly- because Spain is definitely in a geographical spot that can have influence over who comes into the mediterranean. Here's a close up of the Strait of Gibraltar: 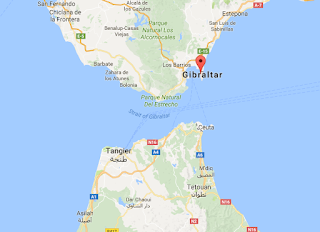 Now we all know where this place is an why it's important.

I am struck by how much this commentary starts to feel like it's about some game being played on a board somewhere. I bet some of the folks coordinating the attacks and war strategies felt this way too. And folks who didn't have much skin in the game, were they watching with curiosity like they were watching a chess match? It's an eerie feeling. It's a similar feeling I get when I find myself being fascinated and in awe of a massive hurricane that has a perfect eye in the center and massive winds. I find myself getting excited when it gets stronger because of the sheer beauty and massiveness of it, but then I have a quick sobering moment when I realize that this storm will potentially hit somewhere and cause complete and total chaos to human lives. Then I realize, this is not a game.