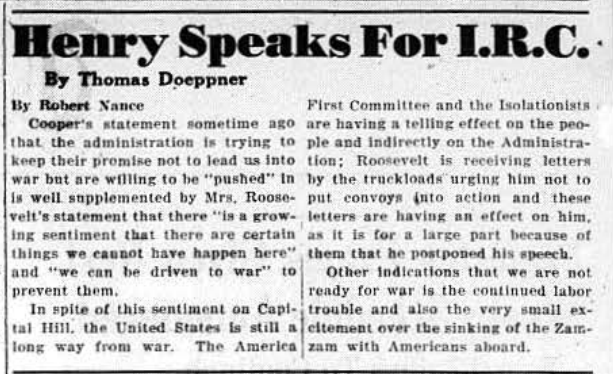 Henry Speaks For the I.R.C.
By Thomas Doeppner

Cooper's statement sometime ago that the administration is trying to keep their promise not to lead us into war but are willing to be "pushed" in is well supplemented by Mrs. Roosevelt's statement that there "is a growing sentiment that there are certain things we cannot have happen here" and "we can be driven to war" to prevent them.

In spite of this sentiment on Capital Hill, the United States is still a long way from war. The America First Committee and the Isolationists are having a telling effect on the people and indirectly on the Administration; Roosevelt is receiving letters by the truckloads urging him not to put convoys into action and these letters are having an effect on him, as it is for a large part because of them that he postponed his speech.

Other indications that we are not ready for war is the continued labor trouble and also the very small excitement over the sinking of the Zamzam with Americans aboard.

This growing tension with the America First Committee and Isolationists vs. FDR and followers is getting awkward. Especially since I know their future.

I'm realizing just how difficult this whole thing is though. Where would I have landed in this debate? I honestly don't know. First, I kind of hate the elitist name "America First" -which completely ignores the growing global connection that the United States has. I can't help but feel like those sentiments are being revived here in America today. At face-value, you can understand the idea of keeping America out of everyone else's business, and protecting ourselves as a result. However, and maybe it was more feasible (I doubt it) in the 1930s, but the idea of being able to stuff our ears with cotton and close our eyes and nothing will affect us, it seems naive and irresponsible at best.

Then flip to the other side. You have Opa and his Quaker network. I am drawn to the Quakers and their ideals, so I deeply resonate with one of their premiere principles: pacifism. Opa struggled with this considerably over the years, as I have seen in his letters to Gisela and his own hesitance to be in the military. But at the heart of pacifism is a deep conviction that peace can be made without violence. This is one I hold, yet when faced with a runaway war machine like Hitler's, it makes you wonder how that could possibly work.

My guess is that there are two different kind of folks petitioning and writing to FDR about not wanting to join the war. The first group are those who would like to ignore the rest of the world and stay on our own island and tend to the folks at home. The other group are those who are aware of the world, but want FDR to choose any method at all BUT war, especially since the nation has in recent memory experienced what it is like to be involved in a world war without much positive to show for it. The war ended in 1918, so a little over 20 years prior to this article, the US was wrapping up a major war. In the time between that war and 1941 the United States saw a deep depression. It makes sense that the Isolationists would like to make sure they really are on solid ground before getting involved in anything else.

Desert storm was almost 30 years ago but I still remember it very well, my friends had dads who were "going to war" which was new to all of us. I was afraid my Dad would be sent, but as a test pilot, he was most useful on American soil. Desert Storm was not a particularly long or world-wide engagement, but it left a mark on me. Imagine for these folks what their memory was for something like the "Great War" that was named in a way that you would end your sentence "to end all wars."

As an aside, the Great War lasted from 1914-1918, but the US was only involved from April 1917 until November 1918 (with the war trickling down as early as July 1918). I didn't realize that the US was only in the conflict for a little over a year. Imagine this war, begun in 1939, still raging with no end in sight in 1941. No wonder the US had waited, perhaps they thought they could wait it out completely.

Then you go back to the original feeling that the United States is not a metaphorical island, but connected (by treaty and otherwise) to the well-being of the European continent. What was the right decision? It's not so easy to tell. Rumors of the concentration camps had begun, but Hitler had not yet installed the death-camps as we remember from our history lessons. Those did not begin until after the Wansee Conference when the "Jewish problem" was met with an organized and systematic "Final Solution" from the Nazi party. This conference was held in January of 1942, a month after the US joined the war efforts.

These Henry Speak articles remind me that decisions aren't so black and white. We can only guess at what a different decision might have meant, or what effect other methods of involvement might have had by the US government. Either way, I'm seeing both sides here. I'm also loving that the American people have long been writing truckloads of letters to their representatives.

OK- before I finish, I have to comment on this Zamzam thing! Had you ever heard of it? I had not! The Zamzam incident is fascinating!! When Opa said that an indication that the Americans were not ready for war was the "very small excitement over the sinking of the Zamzam with Americans on board," I thought- what is the Zamzam?!

You guys- he was right that it was weird that no one seemed to care. It's kind of a crazy story. A ship full of American missionaries (and some folks from other countries) were on their way to Africa. They thought they were safe because they were an American vessel sailing far south, out of the general way of German U-boats and British war ships. Unfortunately, they were wrong. A U-boat saw them and since they had blacked out their windows they seemed suspicious, so the U-boat torpedoed them. That same vessel saved them from their own wreckage because they realized they had sunk a boat full of Americans with women and children. With America not yet in the war, this was a major diplomatic issue- so they treaded lightly. The Germans transferred them to a ship for almost a month where the prisoners had sub-par conditions (but not harsh). Then they finally took the Americans to Nazi-occupied France where they eventually were taken back home. Except some of those folks had to go to prison camps because they weren't strictly American (a Canadian husband was separated from his American wife and kids). Almost everyone survived the ordeal (except one guy who was injured in the original attack), but some had to spend a lot of time in prison before finally getting released. Here is a fantastic site that gives the story with better detail, pictures of the event, and reunions of survivors.

Isn't that the craziest story?! And it seems that in America, people were not deeply upset by it. It did not create an outcry that an American vessel was sunk by the Germans, or that people born in America but traveling on a Canadian visa were imprisoned. A bunch of kids were on a German prison ship for a month, and America was like "meh." Or at least that was Opa's impression. That's definitely a country not ready to raise arms.