May 14, 1941: Incomprehensible Indifference and Ignorance 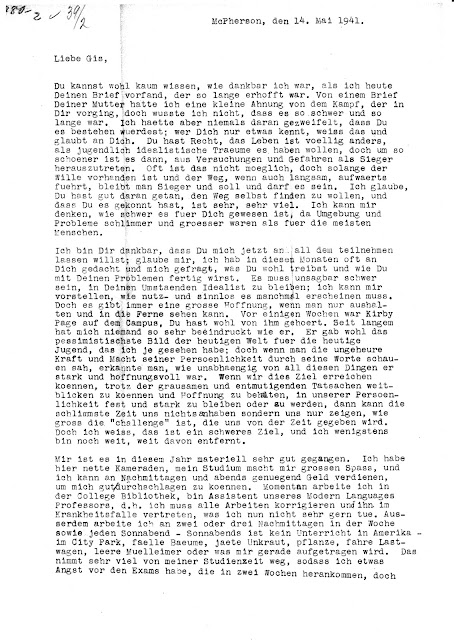 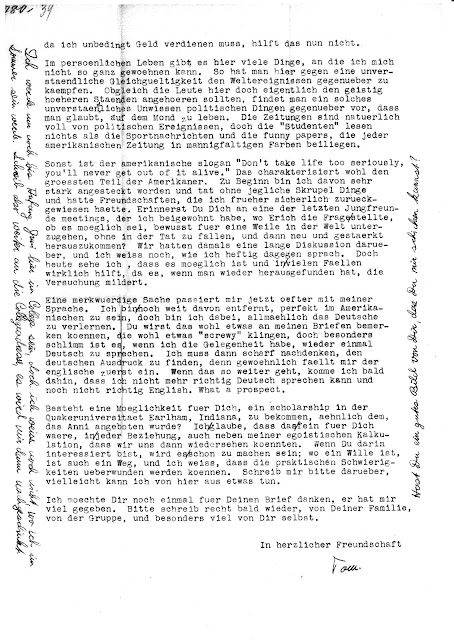 It is so good to hear Opa's voice again. I am sad that we don't have more of his voice as a German new to the United States. Here in this letter, he's been in Kansas for almost two years and still there is newness. I was reminded by Opa's reference to Gis' mother's letter and her letter, that Opa did not keep those letters. He kept his family letters and so important ones during his emigration process, but he didn't keep the letters from his friends. That's too bad. I would have liked to know just what was going on with Gisela and Anni, from their perspective. I wonder when Opa decided to get rid of those letters.

It seems like Gisela hasn't written in a while and Opa is really glad she finally does. It sounds like things are really tough for Gisela and she needed to tell someone outside her circle. I imagine it was cathartic for her to write to someone who knew her and her family well, but wasn't also suffering the same pain. A lot of times we focus on getting people with similar struggles together as part of a support network of people who can understand your pain. However, I can see how Gisela might not want to open up about her pain with her siblings and friends who are going through the same thing. Everyone is likely grinning and bearing it, dealing with it without too much complaint so they can survive. Someone like Opa who is safe from the Nazis (relatively) might have the space to hold the pain. Gisela's sister, Anni, wrote a biographical pamphlet on the Quaker youth group, and in it she describes the Nazi interrogations that she and her family would have to endure in order to continue the work that they did at their center. I don't believe physical torture was involved, but it had to have been psychologically terrifying. Gisela was in England for a while but then went back home. I know her family was heavily involved in helping refugees the best they could, was Gisela involved with that? Or was something else going on?

How that must have been so hard for Opa to read, knowing his mother was still inside such a toxic place, knowing his friends did not enjoy the same kind of freedoms that he did, knowing there was very little he could do to help.

The one thing Opa could do was encourage hope. Opa's letter was full of hope- not naive - but stubborn hope that doesn't die no matter what it faces. He writes about hope after hearing from a speaker Kirby Page:


If we can reach this goal, to be able to look forward despite the gruesome and discouraging facts and to hold on to hope, to stay or become solid and strong in our character, then even the worst times can't do us in, but only serve to show us how big the "challenge" is that is given to us by the times.

Hold on to hope. He talked about looking out to the future in hope. For Gisela, that hopeful future must have felt like a moving horizon, never within reach.

Opa talks a little bit about himself, and in this letter we get details we never would have known. I now understand why Ella is constantly fussing at him not to work so hard. He is working at the library, as an assistant to a professor, and in the park on nights and weekends. I kind of laugh to think about Opa pulling weeds, planting, and other agricultural type things. I'd be surprised if he pulled one weed in his life in Berlin! The city boy sure is getting his country education. It makes you wonder how he got his school work done! He also was busy being a sort of ambassador from Europe to the American students.

Opa's impression of Americans is so spot-on, I can't believe it's still as true today as it was then. It's our double-edged sword in our culture. We can afford to be optimistic and doe-eyed because many of us are unaffected by world events. And unfortunately, many of us are uninterested in world events. As a high school student, we had a portion of one of our history classes where we were assigned to bring in an article for the "current affairs" portion of the day. We had to bring in an article to discuss about something going on in the world that day. I shudder to think what our articles of choice were. I'm pretty sure most of them were local or pop-culture. Not that there is anything wrong with either of those, but I graduated not realizing that the Cold War was a direct response of the second world war. Opa's words are particularly sharp:


Here you have to struggle against an incomprehensible indifference to world events. Even though the people here actually supposedly hold to these spiritually higher views, you find such an incomprehensible ignorance concerning political things that you’d think you lived on the moon.

Ouch. Opa admits he fell into the trap a bit. I'm sure it felt good to be free and relaxed and not care for just a little bit. Of course he did not have the luxury to stay in that place, as his mother was writing him from home, begging him to find an affidavit, find a way for her to come. He says he learned from his quick dip into the world and is not as tempted to turn the blinders on. I bet a letter from Gisela reminds him of why he wants to keep caring, and not be indifferent.

Opa confesses that his German is starting to slip a bit, so that now he's sort of in no-man's land with his language. Not quite fluent in English, and not so comfortable anymore in his German. What an odd experience that must be!

Opa encourages Gisela to try to come to the States for school, gives her a pep talk, and asks for a picture. Gisela kept his letters. Over 70 years she kept them. Those little pep talks must have meant something to her.

In the meantime, particularly my American readers, let's not be incomprehensibly indifferent and ignorant, alright? I'm going to try to do better, learn more, be more informed. I'm going to try to figure out how to engage my children in the world- with its hopes and struggles.
Posted by Sarah Snow at Monday, October 17, 2016