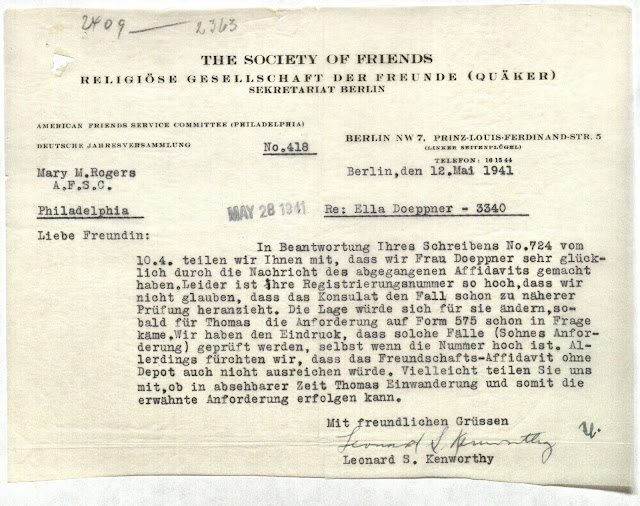 The Society of Friends
Berlin Secretary (Clerk)
American Friends Service Committee
Mary M. Rogers           Berlin, May 12 1941
AFSC
Phildelphia          Re: Ella Doeppner - 3340
Dear Friend:
In response to your correspondence no. 724 from 4/10 we share with you that we made Frau Doeppner very happy with the news of the sent-off affidavit. Unfortunately her registration number is so high that we don’t believe the consulate will advance her case for closer examination. The status would change for her as soon as for Thomas the request on Form 575 came into the question.  We are under the impression that such cases (son’s request) are examined even when the number is high. In any case we are afraid that the friendship affidavit without a deposit also wouldn’t be enough. Perhaps you can share with us whether in the foreseeable future Thomas’s immigration can go forward and with it the aforementioned request.
With friendly greetings,
Leonard S. Kenworthy

Leonard Kenworthy is a fascinating guy, I've mentioned him before and I think we owe you a spotlight on him. I recently printed out one of his books that I linked in a previous blog about his time in Berlin. He was an American that came to Berlin in 1940-1941 and was helping the Berlin Quakers in their efforts to help refugees. I wasn't sure if he would have received the Affadivit and been able to help Ella since he leaves Berlin in June. But it seems that he did get the mail and was able to speak to Ella about it. She is of course thrilled. However, they say that her registration number is still far too high for her to be called, and the affidavit will not put her to the front of the line. One thing that they think will make a difference is if Opa makes a request to have his mother join him, something to do with a form 575. The question of course is whether Opa's legal status is solid enough for him to make such a request. As we know it, he is not a legal resident of the United States, so his request would mean nothing right now.
Now I wonder- does his mother know that? I doubt it. Does Leonard Kenworthy know it? Maybe. He sort of alludes to the fact that Opa's immigration is in some jeopardy. If Opa's request is the only thing standing between Ella and the United States, then a lot rides on how the INS responds to his request for a stay. I don't know how official he needs to be for his request to stick. Does he need to be on a student visa? Will an extension of temporary stay be helpful at all? It seems everyone assumes the affidavit isn't strong enough (which baffles me), will Opa find another? SO many questions. But everyone is trying hard. And now we know that Ella received a moment of joy that her son found an affidavit.
I'll rest in that moment of joy.
Posted by Sarah Snow at Thursday, October 13, 2016