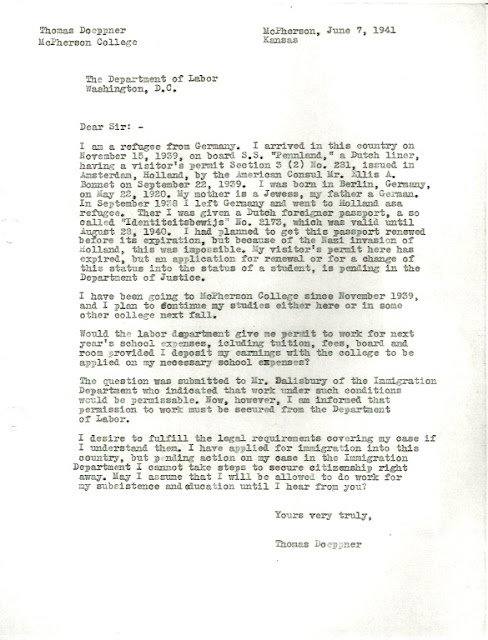 Letter from Opa to Department of Labor

The Department of Labor
Washignton, D.C.

I am a refugee from Germany. I arrived in this country on November 15, 1939, on board S.S. "Pennland," a Dutch liner, having a visitor's permit Section 3 (2) No. 231, issued in Amsterdam, Holland, by the American Consul Mr. Ellis A. Bonnet on September 22, 1939. I was born in Berlin, Germany, on May 22, 1920. My Mother is a Jewess, my father a German. In September 1938 I left Germany and went to Holland as a refugee. There I was given a Dutch foreigner passport, a so called "Identiteitsbewijs" No. 2173, which was valid until August 23, 1940. I had planned to get this passport renewed before its expiration, but because of the Nazi invasion of Holland, this was impossible. My visitor's permit here has expired, but an application for renewal or for a change of this status into the status of a student, is pending in the Department of Justice.

I have been going to McPherson College since November 1939, and I plan to continue my studies either here or in some other college next fall.

Would the labor department give me permit to work for next year's school expense, including tuition, fees, board and room provided I deposit my earnings with the college to be applied on my necessary school expenses?

The question was submitted to Mr. Salisbury of the Immigration Department who indicated that work under such conditions would be permissible. Now, however, I am informed that permission to work must be secured from the Department of Labor.

I desire to fulfill the legal requirements covering my case if I understand them. I have applied for immigration into this country, but pending action on my case in the Immigration Department I cannot take steps to secure citizenship right away. May I assume that I will be allowed to do work for my subsistence and education until I hear from you?

Opa's getting his act together, dotting all the i's and crossing the t's. I wonder if President Schwalm laid it on thick that  Opa really needed permission to work (Schwalm was told in confidence by Annelise Thieman that Opa's illegal working could result in internment). This letter certainly has me convinced to give Opa permission. He's law abiding with some unfortunate snags along the way that have made his visa expire and his Holland passport non-existent. PS- that words for the Holland foreign passport is fantastic! Identiteitsbewijs. Say that five times fast.

I'm reminded that the last time Opa heard from the INS- they said- don't do anything until we get back to you. This was when they had to sort out his application for a renewal that got lost in the shuffle when they discovered that they had two files for him at the INS. They were going to sort that out and get back to him. They never got back to him. The next letter Opa writes is to Mr. Salisbury with the INS. 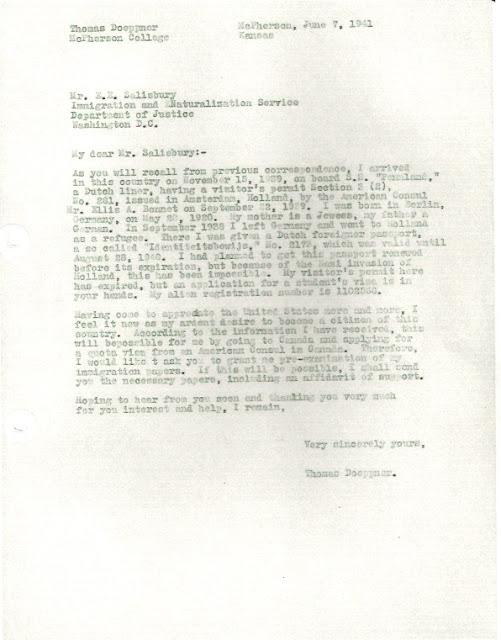 Letter from Opa to Mr. Salisbury of INS/Department of Justice

As you will recall from previous correspondence, I arrived in this country on November 15, 1939, on board S.S. "Pennland," a Dutch liner, having a visitor's permit Section 3 (2), No. 231, issued in Amsterdam, Holland, by the American Consul Mr. Ellis A. Bonnet on September 22, 1939. I was born in Berlin, Germany, on May 22, 1920. My mother is a Jewess, my father a German. In September 1938 I left Germany and went to Holland as a refugee. There I was given a Dutch foreigner passport, a so called "Identiteitsbewijs," No. 2173, which was valid until August 28, 1940. I had planned to get this passport renewed before its expiration, but because of the Nazi invasion of Holland, this has been impossible. My visitor's permit here has expired, but an application for a student's visa is in your hands. My alien registration number is 1102565.

Having come to appreciate the United States more and more, I feel it now as my ardent desire to become a citizen of this country. According to the information I have received, this will be possible for me by going to Canada and applying for a quota visa from an American Consul in Canada. Therefore, I would like to ask you to grant mw pre-examination of my immigration papers. If this will be possible, I shall send you the necessary papers, including an affidavit of support.

Hoping to hear from you soon and thanking you very much for your interest and help, I remain,

My favorite line from that letter: "an application for a student's visa is in your hands." More like: what's the hold up sonny? But this letter reveals to us that Opa is planning to take the Canadian plan of immigration and is hoping Salisbury will respond and give him the go-ahead. It also tells us that Opa found an affidavit! Where did he get that from? This next letter he wrote a couple days later to Annelise Thieman, probably bragging about how he did everything she told him to do... 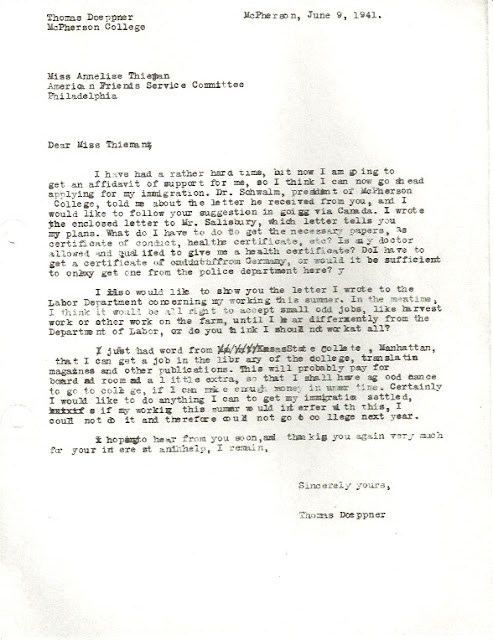 I have had a rather hard time, but now I am going to get an affidavit of support for me, so I think I can now go ahead applying for my immigration. Dr. Schwalm, president of McPherson College, told me about the letter he received from you, and I would like to follow your suggestion in going via Canada. I wrote the enclosed letter to Mr. Salisbury, which letter tells you my plans. What do I have left to do to get the necessary papers, as certificate of conduct, health certificate, etc? Is any doctor allowed and qualified to give me a health certificate? DO I have to get a certificate of conduct from Germany, or would it be sufficient to only get one from the police department here?

I also would like to show you the letter I wrote to the Labor Department concerning my working this summer. In the meantime, I think it would be alright to accept small odd jobs, like harvest work or other work on the farm, until I hear differently from the Department of Labor, or do you think I should not work at all?

I just had word from Kansas College, Manhattan, that I can get a job in the library of the college, translating magazines and other publications. This will probably payoff board and room and a little extra, so that I shall have a good chance to go to college, if I can make enough money in time. Certainly I would like to do anything I can to get my immigration settled, if my working this summer would interfere with this, I could not do it and therefore could not go to college next year.

I'm hoping to hear from you soon, and thanking you again very much for your interest and help. I remain,

Ok I don't know if you noticed how much that actual letter was riddled with typos and weird spacing, but that was a mess of a letter! I don't know if Opa was seriously rushed or just annoyed with Annelise- but it isn't like him to send such a mess in the mail. He is German, after all.

His letter was pretty much telling Annelise he did as he was told. I can't help but feel sorry for him as you can see his stubborn stride in his absolute focus on trying to keep on his path to go to school. He really doesn't want to stop working, he really doesn't want to stop this progress toward Kansas State which seems to be going well (he got a job!). You can hear him almost saying to Annelise- is there ANY way I can just keep doing what I've been doing and not mess so much with this immigration stuff?! It's become a major road block for his goals. Now we sit and wait. Will he go to Canada? Will he have to tell Kansas State no?