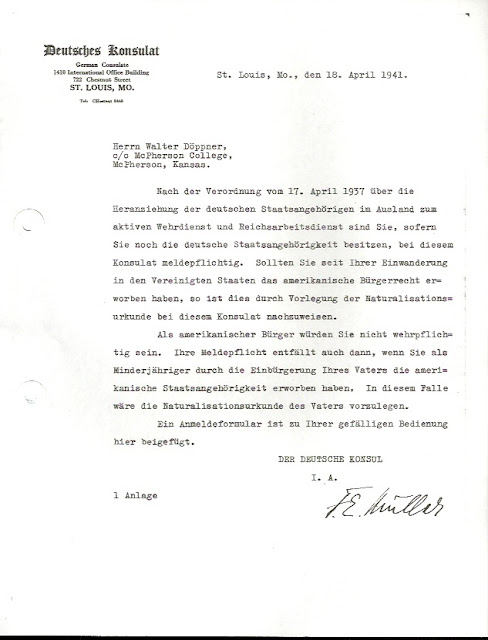 Letter from German Consulate in St. Louis, MO to Opa
(Translation in next letter) 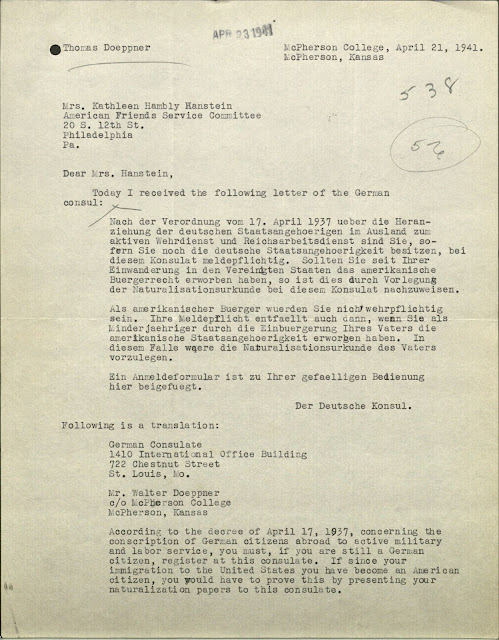 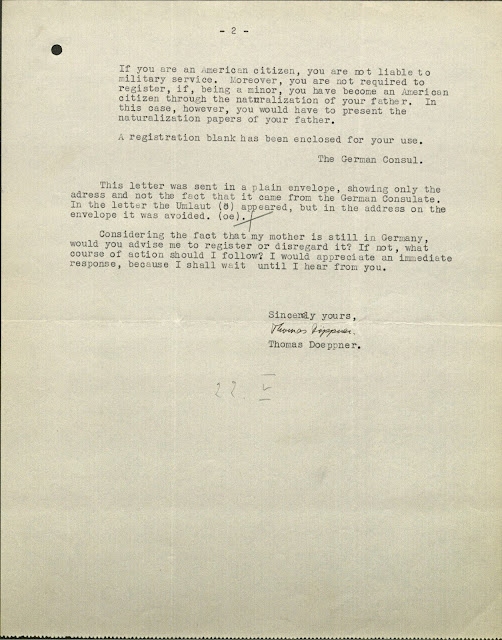 Letter from Opa to Mrs. Hanstein of AFSC, and Translation of German Consul Letter

Today I received the following letter of the German consul:

(he copies the German letter here)

Following is a translation:

According to the decree of April 17, 1937, concerning the conscription of German citizens abroad to active military and labor service, you must, if you are still a German citizen, register at this consulate. If since your immigration to the United States you have become an American citizen, you would have to prove this by presenting your naturalization papers to this consulate.

A registration blank has been enclosed for your use.

This letter was sent in a plain envelope, showing only the address and not the fact that it came from the German Consulate. In the letter the Umlaut (ö) appeared, but in the address on the envelope it was avoided.(oe).

Considering the fact that my mother is still in Germany, would you advise me to register or disregard it? If not, what course of action should I follow? I would appreciate an immediate response, because I shall wait until I hear from you. 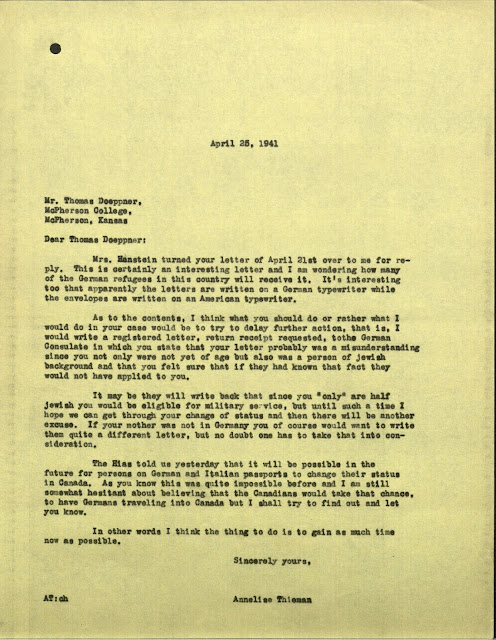 As to the contents, I think what you should do or rather what I would do in your case would be to try to delay further action, that is, I would write a registered letter, return receipt requested, to the German Consulate in which you state that your letter probably was a misunderstanding since you not only were not yet of age but also was a person of jewish background and that you felt sure that if they had known that fact they would not have applied to you.

It may be they will write back that since you "only" are half jewish you would be eligible for military service, but until such a time I hope we can get through your change of status and then there will be another excuse. If your mother was not in Germany you of course would want to write them quite a different letter, but no doubt one has to take that into consideration.

The Hias told us yesterday that it will be possible in the future for persons on German and Italian passports to change their status in Canada. As you know this was quite impossible before and I am still somewhat hesitant about believing that the Canadians would take that chance, to have Germans traveling into Canada but I shall try to find out and let you know.

In other words I think the thing to do is to gain as much time now as possible.

Yes. It can. It gets worse.

Opa receives a letter in the mail that on the outside looks innocent, but concealed inside is a letter from the German consulate informing Opa that unless he has changed citizenship, he is to register for military service. It addresses him by his middle name: Walter, but recently my Dad pointed out to me that on Opa's birth certificate, his name is Walter Thomas Doeppner. At some point he switched his first and middle legally, but it seems that he was always called Thomas. So Opa receives this letter, and as he reads it, I can just imagine his stomach sinking lower and lower into a sea of knots.

This is when Opa likely used a series of words his mother would not have approved of.

The letter seems very general, it doesn't appear to have ay details about Opa's actual situation. I am pretty sure it's a form letter that was drafted in multiples and sent to all the German immigrants in the United States who likely all had the "Oh crap" moment upon reading it.

Opa writes to Kathleen Hanstein of AFSC, she must be his favorite because no matter how many times Annelise Thieman writes him back, he keeps writing to Mrs. Hanstein. Ha.

Mrs. Thieman writes him back and gives pretty good advice. Her response to Opa's query about what to do is: stall them. Write with some excuses, make the mail complicated and take time responding. She mentioned that Opa could say he wasn't of age- which he certainly is at this point (he's about to turn 21 in May), unless she's referring to when he left Germany and did not register. She tells him to mention he thought his jewish ancestry would make him ineligible (which she knew that because he was half-jewish that was not actually true). Stall them and play dumb is basically Mrs. Thiamin's response.

She agrees that Opa should be careful since his mother is still in Germany, not to write the letter he is likely itching to write. I appreciate her cunning, she knows that ultimately he just needs to buy some time, and likely things will change significantly very soon (as they have been doing as the war carries on). She probably also saw that the writing was on the wall that the US would likely enter the conflict as some point, and at that point everything would change. Little do they know that by the end of the year, Japan would bomb Pearl Harbor and the US would be a full participant in the fight against the Nazis and their friends.

Here's the question... can Opa stall them enough? With the US already threatening deportation and the Germans asking him to serve in the military- what are Opa's odds of slipping through this situation safely?