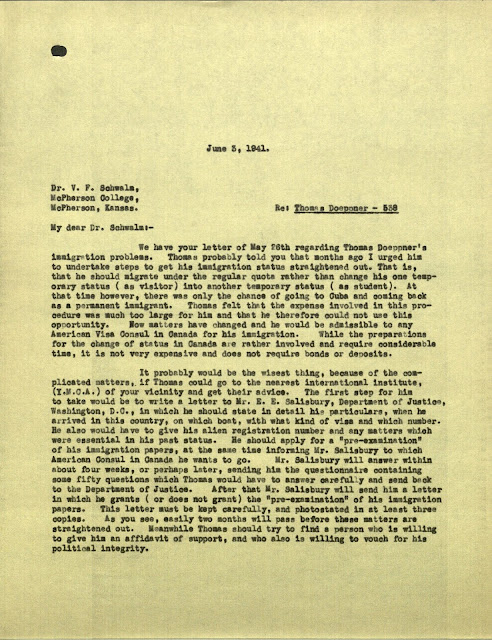 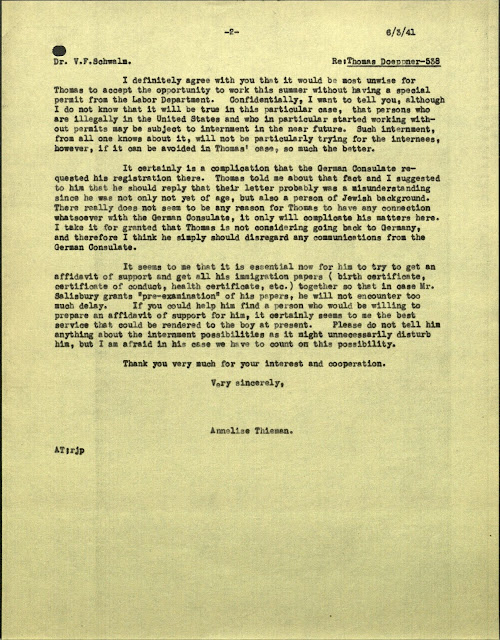 Letter from Annelise Thieman of AFSC to President V.F. Schwalm of McPherson College

We have your letter of May 26th regarding Thomas Doeppner's immigration problems. Thomas probably told you that months ago I urged him to undertake steps to get his immigration status straightened out. That is, that he should migrate under the regular quota rather than change his one temporary status (as visitor) into another temporary status (as student). At that time however, there was only the chance of going to Cuba and coming back as a permanent immigrant. Thomas felt that the expense involved in the procedure was much too large for him and that he therefore could not use this opportunity. Now matters have changed and he would be admissible to any American Visa Consul in Canada for his immigration. While the preparations for the change of status in Canada are rather involved and require considerable time, it is not very expensive and does not require bonds or deposits.

It probably would be the wisest thing, because of the complicated matters, if Thomas could go to the nearest international institute, (Y.M.C.A.) of your vicinity and get their advice. The first step for him to take would be to write a letter to Mr. E. E. Salisbury, Department of Justice, Washington, D.C. in which he should state in detail his particulars, when he arrived in this country, on which boat, with what kind of visa and which number. He also would have to give him his alien registration number and any matters which were essential in his past status. He should apply for a "pre-examination" of his immigration papers, at the same time informing Mr. Salisbury to which American Consul in Canada he wants to go. Mr. Salisbury will answer within about four weeks, or perhaps later, sending him the questionnaire containing some fifty questions which Thomas would have to answer carefully and send back to the Department of Justice. After that Mr. Salisbury will end hi a letter in which he grants (or does not grant) the "pre-examination" of his immigration papers. This letter must be kept carefully, and photostatted in at least three copies. As you see, easily two months will pass before these matters are straightened out. Meanwhile Thomas should try to find a person who is willing to give him an affidavit of support, and who is willing to vouch for his political integrity.

I definitely agree with you that it would be most unwise for Thomas to accept the opportunity to work this summer without having a special permit from the Labor Department. Confidentially, I want to tell you, although I do not know that it will be true in this particular case, that persons who are illegally in the United States and who is particular started working without permits may be subject to internment in the near future. Such internment, from all one knows about it, will not be particularly trying for the internees, however, if it can be avoided in Thomas' case, so much the better.

It certainly is a complication that the German Consulate requested his registration there. Thomas told me about that fact and I suggested to him that he should reply that their letter probably was a misunderstanding since he was not only not yet of age, but also a person of Jewish background. There really does not seem to be any reason for Thomas to have any connection whatsoever with the German Consulate, it only will complicate his matters here. I take it for granted that Thomas is not considering going back to Germany, and therefore I think he simply should disregard any communications from the German Consulate.

It seems to me that it is essential now for him to try to get an affidavit of support and get all his immigration papers (birth certificate, certificate of conduct, health certificate, etc.) together so that in case Mr. Salisbury grants "pre-examination" of his papers, he will not encounter too much delay. If you could help him find a person who would be willing to prepare an affidavit of support for him, it certainly seems to me the best service that could be rendered to the boy at present. Please do not tell him anything about the internment possibilities as it might unnecessarily disturb him, but I am afraid in his case we have to count on this possibility.

Thank you for your interest and cooperation.

This letter makes me not like Annelise Thieman, and makes me doubt Opa, which is why I'm not liking Annelise. I think she cares and is trying to help Opa out, but she started out this letter so snotty about how she told Opa ages ago about what he should do, and since he didn't, he's put himself in this mess.

Here's the thing, she's kinda right. Opa dismissed the Cuba plan as being out of his realm of possibilities. And I get it- the rules seem to keep changing and the countries flip their alliances or the flavor of refugee they're comfortable with as the wind changes. I would not want to spend my entire savings and be penniless in Cuba with only a small possibility that this might be the hand of poker that gets me back into the US with a solid immigration paper. It all seems too ridiculous. Why would you leave the country you wish to be in?

But on the other hand, Opa is stubbornly holding on to his dream of going to school to be an engineer, he's working so he can go to school. If he would just put that on hold for a minute - it's not like his immigration status depends on him still going to school - he has no status. He needs to get his own immigration worked out, and by dragging his feet on the extreme answers, he may have gotten himself a ticket into an internment camp.

At the top of my concerns is that his strategy might have jeopardized Ella's chances to come to the US. Not that he could have known that, or that his status as a permanent immigrant would necessarily change anything. But as we know the war between the US and Germany is about to begin, and after that, the doorway for immigration is going to be nearly welded shut. It's June. We know the US entered the war in December after Pearl Harbor. That's six months.

I don't think Annelise was very explanatory when telling Opa to go to Cuba. Perhaps she thought he would do it blindly, but she sort of threw it on him and didn't give him any resources or information on why this might be the only shot he has. I don't know. I want to blame Annelise because it's killing me to think that Opa might have dropped the ball on this. None of it is fair. What would you have done if you were Opa? It's not fair that mistakes could mean so much. Ella should have gotten her registration number sooner instead of assuming she'd join Patti in France- but who on earth would assume that would be necessary? Opa should have been given a student visa, and his visa should have been renewed rather than lost in a clerical error of having two files (which has still not been resolved or mentioned since). Maybe Opa should have gone to Cuba, or now should go to Canada. But maybe that's actually the wrong choice. Maybe Cuba cuts off its borders and Opa is stranded without knowing a soul or the language. Maybe Canada starts rounding up Germans and interning them. There is no way to make a choice in this kind of situation!

Yeah, I'm just going to be mad at Annelise. She's acting like it was such an easy choice and such a clear action, and that's just not fair of her. But seriously, what the heck is Opa going to do?!
Posted by Sarah Snow at Tuesday, October 25, 2016