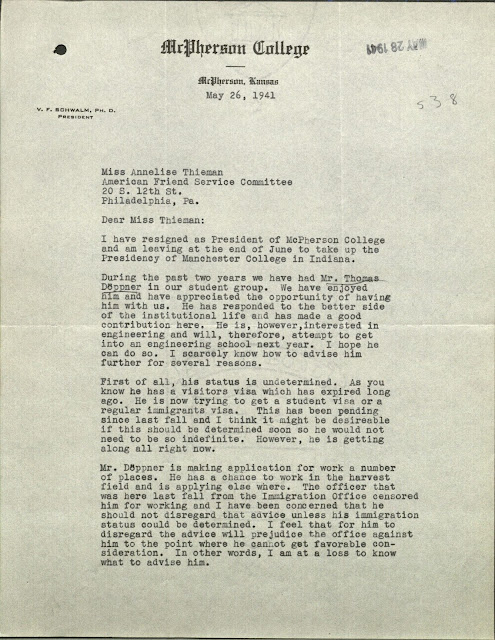 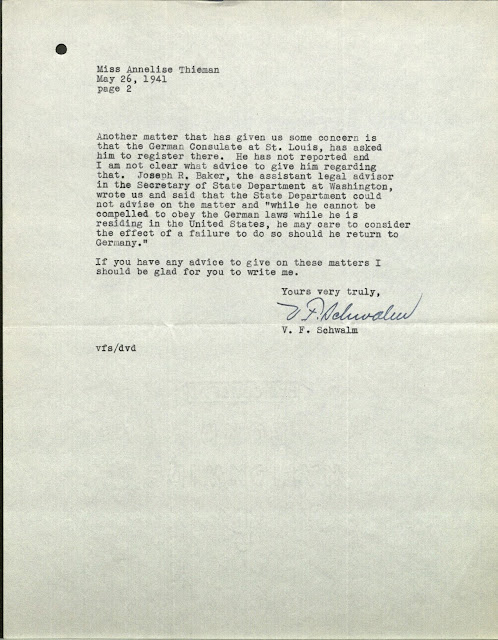 I have resigned as President of McPherson College and am leaving at the end of June to take up the Presidency of Manchester College in Indiana.

During the past two years we have had Mr. Thomas Döppner in our student group. We have enjoyed him and have appreciated the opportunity of having him with us. He has responded to the better side of the institutional life and has made a good contribution here. He is, however, interested in engineering and will, therefore, attempt to get into an engineering school next year. I hope he can do so. I scarcely know how to advise him further for several reasons.

First of all, his status is undetermined. As you know he has a visitors visa which has expired long ago. He is now trying to get a student visa or a regular immigrants visa. This has been pending since last fall and I think it might be desirable if this should be determined soon so he would not need to be so indefinite. However, he is getting along all right now.

Mr. Döppner is making applications for work a number of places. He has a chance to work in the harvest field and is applying else where. The officer that was here last fall from the Immigration Office censored him for working and I have been concerned that he should not disregard that advice unless his immigration status could be determined. I feel that for him to disregard the advice will prejudice the office against him to the point where he cannot get a favorable consideration. In other words, I am at a loss to know what to advise him.

Another matter that has given us some concern is that the German Consulate at St. Louis, has asked him to register there. He has not reported and I am not clear what advice to give him regarding that. Joseph R. Baker, the assistant legal advisor in the Secretary of State Department at Washington, wrote us and said that the State Department could not advise on the matter and "while he cannot be compelled to obey the German laws while he is residing in the United States, he may care to consider the effect of a failure to do so should he return to Germany."

If you should have any advice to give on these matters I should be glad for you to write me.

Oh man. V.F. Schwalm states that Opa's status as "undetermined" and I think that might be the most precise, though understated, way to describe the situation that Opa finds himself in.

V.F. Schwalm is leaving McPherson College after 14 years for his alma Mater, Manchester College. Not only did Schwalm graduate from Manchester, but he spent time there as a professor before becoming the President of McPherson. His tenure has been a good one, and like any good employee, he's making sure he wraps all loose ends before he leaves his post.

Opa is one heck of a loose end. Poor Schwalm doesn't really know quite how to help him, and you can tell he is invested in his future and his well-being. He doesn't want to leave Opa without trying to give him the best chance at success. He writes to Annelise Thieman at the AFSC, and I wonder if Opa might have encouraged it since no one seemed to be giving any advice that made sense to him. So far he's been told to stop working and try to find a way to Cuba. For Opa- that's practically impossible advice.

Schwalm was concerned that Opa continued to work even after the INS officer told him not to. This is news to me- I didn't realize Opa had been told to stop working by the INS. Legally this makes sense, as Opa is technically in the United States on a visitor's visa (that has long since expired) and he is not supposed to be working. The problem is that he was always supposed to have a student visa, which would have allowed him to work, and which was the hinge on which the whole school thing was supposed to work. His whole purpose in coming to the United States (other than obviously escaping Europe) was to study- and to study, he needed to support himself.

So now he's thoroughly undetermined because his German passport is gone (he told us later in life that he destroyed it after escaping). His Holland identification papers cannot be renewed because he no longer lives there and Germany is now in control. So he is legally undocumented. The Germans are trying to claim him, and are pressuring him to register for military service- while he's in Kansas. His mother's successful emigration hangs in the balance, in some part resting on whether or not he can claim legal status in the United States. Also, he's funding his own life, maintaining diplomatic relations with the neighbors so they want him to stay around and trying to do well enough in school so he can keep going and learn something in the meantime.

When I look at a pile of laundry and feel overwhelmed, to gain perspective, I think about this moment for Opa.

The Secretary of State was not able to help Opa either. His legal assistant wrote Schwalm back saying that they could not officially advise him, but that Opa might want to consider the ramifications of disobeying the Germans in case he had to go back there any time soon. That's a gut-punch moment.

Opa is in a really tight place. There do not seem to be any good avenues. I am surprised by Opa's current method, which looks a lot like ignoring everything. Opa is working. He's not going to Cuba or even trying. He's ignoring the German Consul in St. Louis. I don't think he's doing it because he thinks it'll all go away if he ignores it. I'm actually really impressed by this.

He's betting against it all, knowingly at great risk. He bets that he will not get into much trouble for working if someone wants to employ him. That trouble is worth the alternative: starving and not going to school. He bets that the German Consul will have bigger fish to fry than get him to sign up for military service. This is the most dangerous bet as he might be endangering his mother if he refuses. He bets that the immigration mess will work out and that he'll get his extension. At the worst he will be deported, but in that case he would have been deported no matter what, whether he went to Cuba or not. And in Cuba, he's definitely not in the US near his support group or near a school. He lays low and hopes for an opening through the rock and hard place.

So perhaps Opa sits in the uncomfortable place of being undetermined, a price he must pay to avoid being in the space that is determined for him: deportation or worse. He chooses status undetermined over someone else choosing his determined status. Opa was brave.
Posted by Sarah Snow at Thursday, October 20, 2016