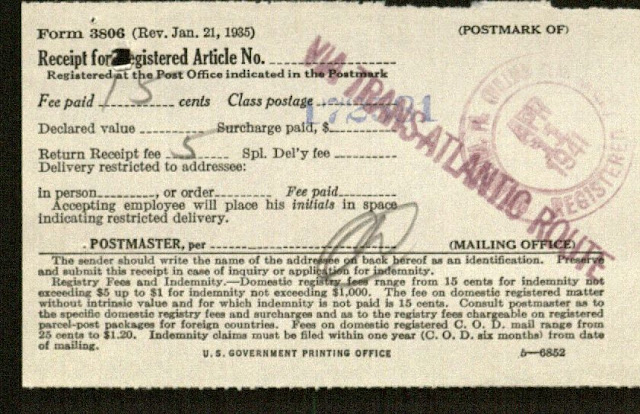 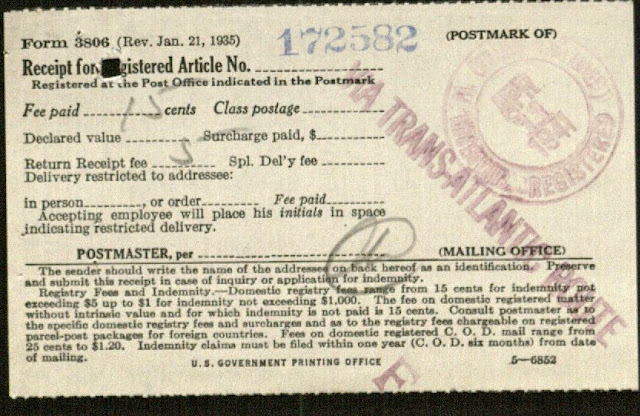 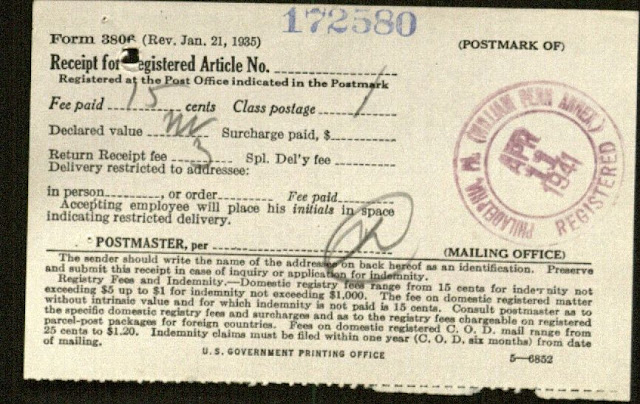 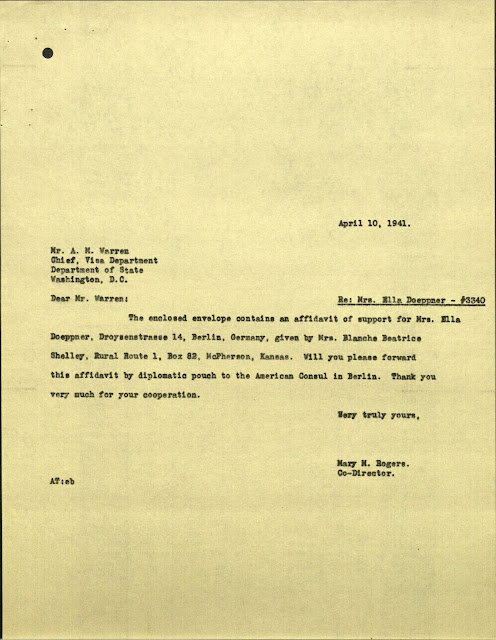 Letter from Mary Rogers of AFSC to Mr. Warren, Chief of Visa Department in DC

The enclose envelope contains an affidavit of support for Mrs. Ella Doeppner, Droysenstrasse 14, Berlin, Germany, given by Mrs. Blanche Beatrice Shelley, Rural Route 1, Box 82, McPherson, Kansas. Will you please forward this affidavit by diplomatic pouch to the American Consul in Berlin. Thank you very much for your cooperation.

Since there are a handful of letters, I'm going to comment as I go. Below you will see that the affidavit was sent directly to the Consulate in Berlin. But here Mary Rogers, who is the Co-Director of AFSC, sent a copy of the affidavit to the Chief in the Visa Department in DC. She asks him to forward it to the American Consul in Berlin via diplomatic pouch. I'm not sure if this was standard, but I'm going to venture a guess that it might not have been and that Mary had a diplomatic relationship with Mr. Warren. Just the idea of the affidavit being sent by diplomatic pouch from DC makes the affidavit seem to hold more weight/importance. 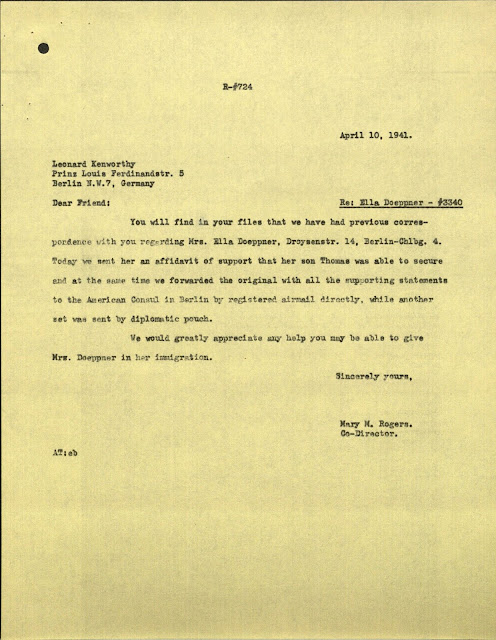 Letter from Mary Rogers of AFSC to Leonard Kenworthy in Berlin, Germany

You will find in your files that we have had previous correspondence with you regarding Mrs. Ella Doeppner, Droysentr. 14, Berlin-CHlbg. 4. Today we sent her an affidavit of support that her son Thomas was able to secure and at the same time we forwarded the original with all the supporting statements to the American Council in Berlin by registered airmail directly, while another set was sent by diplomatic pouch.

We would greatly appreciate any help you may be able to give Mrs. Doeppner in her immigration.

Now this letter requires a little more background. Leonard Kenworthy needs an introduction. I believe he's been mentioned in the blog before, but I've recently discovered a bit more about him, thanks to the advent of digital archiving (and one fantastic website)! Mr. Kenworthy was an American citizen who served as a volunteer for the Berlin Quaker Meeting from June 1940- June 1941. As you can see by the date of this letter, Mr. Kenworthy is nearing his departure, in fact, it may be safe to assume he never received this letter as it typically took about a month to get mail- which is really a shame.

Leonard Kenworthy helped tremendously with the refugee crisis. The Berlin Quaker meeting served as a refugee center, doing a lot of the same kind of work that the AFSC did in the United States. The Berlin group had less power, but stayed in communication with the rest of the Quaker world and other refugee agencies and did much to help the Berlin refugees who desired to emigrate. Now if you want to know everything there is to know about Leonard Kenworthy (he really is fascinating- and his travels and concerns reached beyond this time period)- go to this wonderful site: https://leonardkenworthy.net. If you want to know specifically what he did in Berlin in 1940-41, and in better detail and more accuracy than almost anything I've seen out there, read his book on his time in Berlin, entirely digitized at this specific link. It's worth a read- you will understand infinitely more about what Ella was going through, and where Opa came from.

So Mary Rogers was pulling all the strings she had. Part of Kenworthy's job was to establish relationships in Germany that might help refugees. Rogers wasn't sure, but maybe Kenworthy was cozy with the Consulate and could put in a good word for Ella? At the very least he could be looking out for her and help in any way he could.

Unfortunately it is doubtful that Kenworthy would have had much time to do anything about the request as he had to leave Germany in June.

Which reminds me, do you remember what happened in December of 1941? December 7th, a day which will live in infamy? Pearl Harbor was bombed, and soon after America would enter the war. Opa can't go into Canada because he is German, and Canada is allied in a war against the Germans. What happens to Opa and Ella when the US join the war? 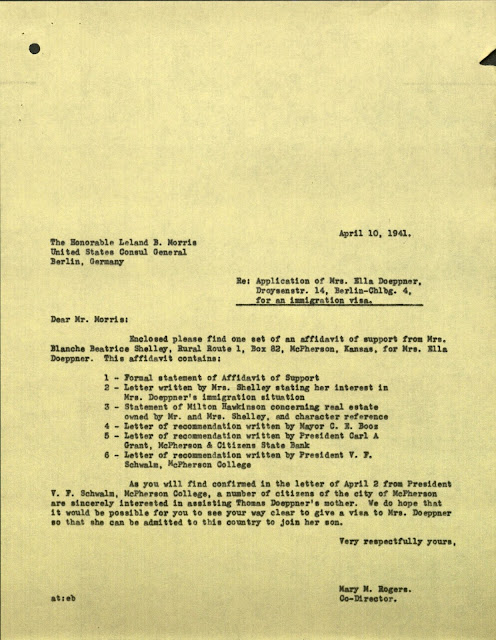 Re: Application of Mrs. Ella Doeppner,
Drpoysenstr. 14, Berlin-Chlbg. 4,
for an immigration visa.

As you will find confirmed in the letter of April 2 from President V.F. Schwalm, McPherson College, a number of citizens of the city of McPherson are sincerely interested in assisting Thomas Doeppner's mother. We do hope that it would be possible for you to see your way clear to give a visa to Mrs. Doeppner so that she can be admitted to this country to join her son.

Mary has no problem being both professional and a total heart-wrencher. Maybe it's just me- but her citing that basically the entire town of McPherson is invested in Ella joining her son in America - it got me. She specifically mentions V.F. Schwalm, who was the President of McPherson at the time. I did a spotlight on him a while back here. The interesting thing about Schwalm is that he actually left McPherson in the fall of 1941 (so about five months from the writing of this letter).

I can't help but be hyper aware of the timing of this whole thing. We have the benefit of knowing the future in this case. Schwalm moves, Kenworthy moves, America joins the war, if there is any time that the visa needs to be worked out- it's this time. 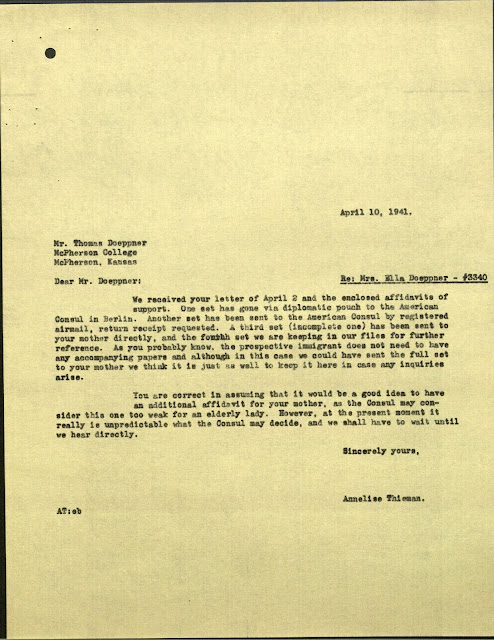 We received your letter of April 2 and the enclosed affidavits of support. One set has gone via diplomatic pouch to the American Consul in Berlin. Another set has been sent to the American Consul by registered airmail, return receipt requested. A third set (incomplete one) has been sent to your mother directly, and the fourth set we are keeping in our files for further reference. As you probably know, the prospective immigrant does not need to have any accompanying papers and although in this case we could have sent the full set to your mother we think it is just as well to keep it here in case any inquiries arise.

You are correct in assuming that it would be a good idea to have an additional affidavit for your mother, as the Consul may consider this one too week for an elderly lady. However, at the present moment it really is unpredictable what the Consul may decide, and we shall have to wait until we hear directly.

I feel like she needed to write "PS: Sorry for being so harsh in my last letter." Alas. I appreciate that Thieman is diligent in informing Opa of the progress of his mother's visa and affidavit. I am sort of dumbfounded why a solid financial affidavit may not be enough for an "elderly lady." Is it that she is somehow undesirable and/or they assume she cannot or will not work? Perhaps. Either way I'm frustrated that this is even a thing. 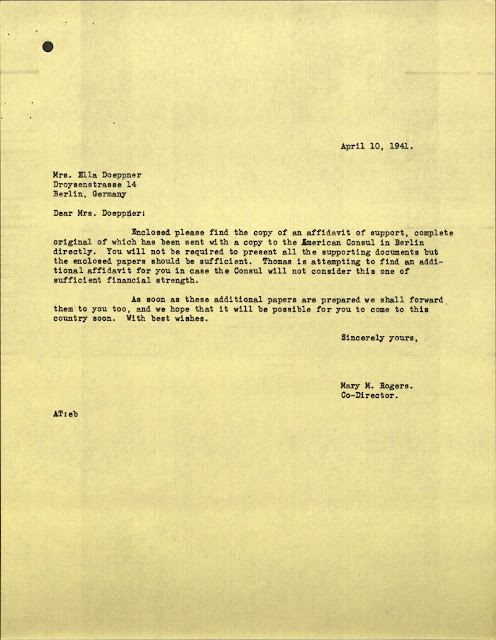 Letter to Ella from Mary M. Rogers, Co-Director of AFSC

Enclosed please find the copy of an affidavit of support, complete original of which has ben sent with a copy to the American Consul in Berlin directly. You will not be required to present all the supporting documents but the enclosed papers should be sufficient. Thomas is attempting to find an additional affidavit for you in case the Consul will not consider this one of sufficient financial strength.

As soon as these additional papers are prepared we shall forward them to you too, and we hope that it will be possible for you to come to this country soon. With best wishes.

I imagined Opa going door to door, asking his friends and colleagues to provide even the smallest affidavit to strengthen the Shelley's. What about his cousins? Hanna? I can imagine Ellenruth is tied up in providing one for her parents in the hope that their Shanghai trip will be successful and they eventually get to the US. But where is everyone else? Why can't they provide even the smallest affidavit? I know it was a big deal and a major pain, but the weight is on the Shelley's, you would think Opa would be able to find a few more folks willing to pile on some small support. I also have to remind myself that he is in Kansas, the state of farmers that suffered the worst drought they had ever seen. Scarcity is a default feeling. And what about Opa? He likely feels like a beggar, having benefitted from the support of his community through their fundraising on his behalf, his scholarship and livelihood provided in part by their generosity. Can he ask for more?

Yet I think of Ella getting this letter and the attached affidavit. How her heart would swell with appreciation for the support of the Shelley's and the kind words by the President of the College and others who praise her son. She has to be so proud. Hope is not lost. The town of McPherson know who she is and welcome her with open arms. Will the Consul let them?