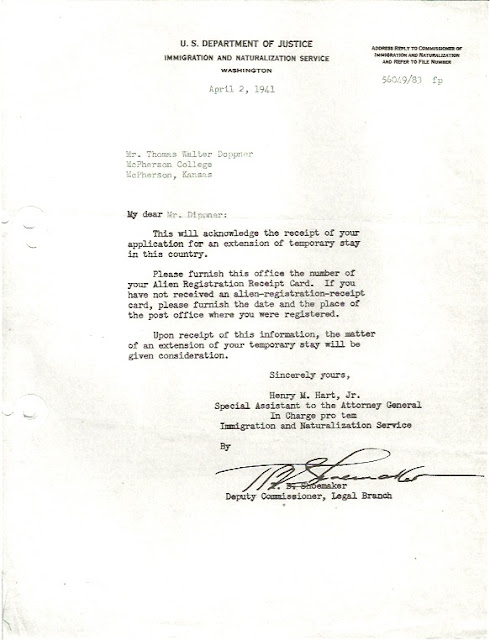 Letter from Deputy Commissioner of US Department of Justice to Opa

US DEPARTMENT OF JUSTICE
IMMIGRATION AND NATURALIZATION SERVICE
WASHINGTON

This will acknowledge the receipt of your application for an extension of temporary stay in this country.

Please furnish this office the number of your Alien Registration Receipt Card. If you have not received an alien-registration-receipt card, please furnish the date and the place of the post office where you were registered.

Upon receipt of this information, the matter of an extension of your temporary stay will be given consideration. 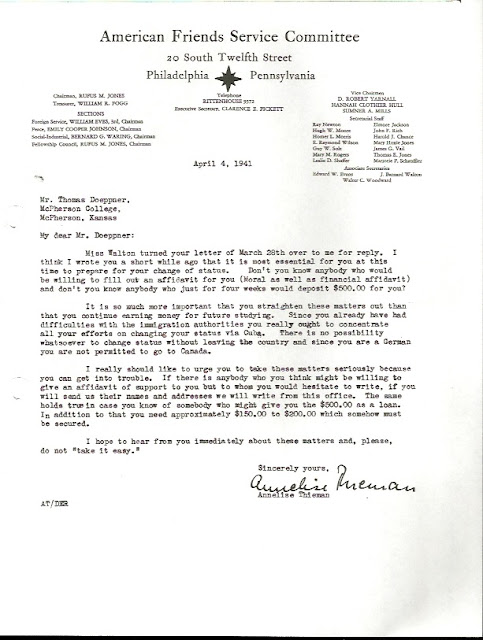 Letter by Annelise Thieman of AFSC to Opa

Miss Walton turned your letter of March 28th over to me for reply. I think I wrote you a short while ago that it is most essential for you at this time to prepare for your change of status. Don't you know anybody who would be willing to fill out an affidavit for you (Moral as well as financial affidavit) and don't you know anybody who just for four weeks would deposit $500.00 for you?

It is so much more important that you straighten these matters out than that you continue earning money for future studying. Since you already have had difficulties with the immigration authorities you really ought to concentrate all your efforts on changing your status via Cuba. There is no possibility whatsoever to change status without leaving the country and since you are a German you are not permitted to go to Canada.

I really should like to urge you to take these matters seriously because you can get into trouble. If there is anybody who you think might be willing to give an affidavit of support to you but to whom you would hesitate to write, if you will send us their names and addresses we will write from this office. The same holds true in case you know of somebody who might give you the $500.00 as a loan. In addition to that you need approximately $150.00 to $200.00 which somehow must be secured.

I hope to hear from you immediately about these matters and, please, do not "take it easy."

Well alrighty then. Opa got a letter from the INS, which is usually not a fun letter, but it seems fairly casual. They received his request for temporary stay and need a little paperwork before they can process it. I am still deeply confused by the lack of follow through on INS and the AFSC. Wasn't there discovery of two files? Weren't they supposed to be looking into it? Wasn't someone supposed to get back to him on that? If they reconciled the files, wouldn't that put in his earlier requests for a visa change and solve his problem? This INS guy seems to not know anything about that (or Opa for that matter- it's basically a form letter and he misspells Opa's last name).

Then you get this lovely letter from Annelise Thieman of the AFSC. It's funny how both letters start out with "My dear" and neither of them seem to follow that tone. Miss Thieman is flat out angry- Opa has dropped the ball and seems to be floating around on the lazy river about his visa. She tries in as many ways as she can to send an electric shock to his feet to get him moving in the right direction. She also seems to have forgotten the two file mix up- or else she realizes that he's run out of time and has to move forward as if his current status is that of a German alien with an expired visitor's visa. To her credit- that is his current status.

Miss Thieman wants Opa to drop everything, especially working to make money for school next year, and focus on the task at hand: becoming a legal resident. She is concerned he is going to get in trouble (or worse, deported) and she is not holding back.

But here's the rub: Opa has to find an affidavit, $500.00, plus another $200.00 for I don't know what. Oh and he needs to go to Cuba. If I were Opa and got this letter I would absolutely fall into a fetal position. How is he supposed to do this? How can he ask more people for an affidavit when he has only successfully found one for his mother- who seems to be in far more danger than he is? How is he supposed to travel to Cuba or get this money when he can barely support himself? And all of this based on what we think we know because the INS isn't responding intelligently.

I think Annelise is angry with Opa's cavalier attitude toward the Cuba thing, and she tells him that that is literally the only possibility he has right now. He can't go to Canada because he is German (Canada is part of the British empire, and the British are at war with Germany- so no Germans allowed).

Does Opa have a friend he can confide in? Does he go to the Shelley's and let them serve as surrogate parents? Or can he not do that because they have just put their entire financial history on an affidavit in an attempt to save his mother?

Did Opa ever just want to give up? Did he ever think- it is just too much? I don't know how he managed. He had to have felt such a burden of responsibility. And he's heard nothing from his father since the invasion in May of 1940, he's heard nothing from Patti for a long time, and all the letters from Ella are pleading him to do something for her immigration, and to remind him to continue his studies because he has a responsibility to use his intellect and freedom.

No Annelise, I don't think Opa has ever been taking it easy.