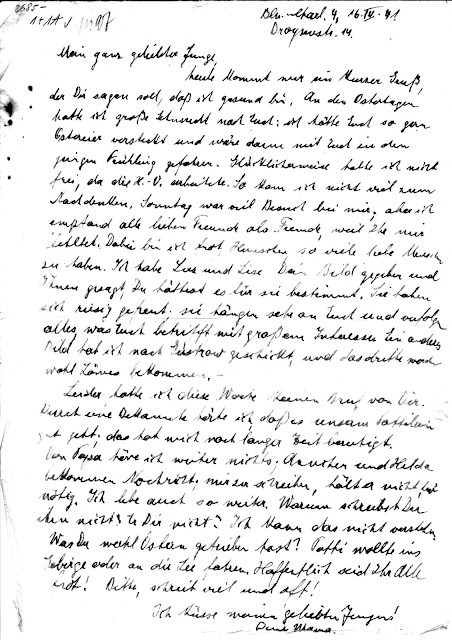 Much much beloved boy,

Today just a short hello, to tell you I am well. I was longing very much for both of you during the Easter days, I would have loved to hide Easter eggs for both of you, and afterwards we would drive (could also mean public transportation, or did she have a car?) into the young springtime. Luckily I was not off, because the H.-V. was working. So I did not have much time to think about it. On Sunday I had many visitors, but all dear old friends felt like strangers, because I missed you two. But I am glad I have so many dear people around me. I gave your picture to L. and Lise and told them it was meant for them! They were very happy about it. Both of them are very attached to you, and follow anything which has something to do with you, with great interest. One other picture I sent to Guestrow, and the third one will be for Loewe’s.

Sadly enough I did not receive a letter from you this week. Through an acquaintance I heard that our Pattilein is doing well, which after a long time has calmed me down. I don't hear anything from Papa, Ann'chen and Hilda received news, to write to me he doesn't think to be necessary! I live my life anyways. Why don't you write to him?
And he not to you? I cannot understand that!

I wonder what you were up to on Easter?
Patti had planned to go to the mountains or the sea. Hopefully all of you are happy. Please write a lot and often.

I kiss my beloved boy!

A short and sweet letter from Ella will make any day better. She writes just to make sure she stays in communication with Opa, though she doesn't have much to write about. She spent Easter without her children, who undoubtedly are too old for hidden eggs, but that doesn't stop her from imagining their delightful search. She is missing that natural time when children grow into adults in front of their parents. She doesn't get to see the incremental change unfold in front of her. Rather she has to imagine their growing and change with letters and indirect news as clues to their evolving maturity. it's no wonder she resorts to childhood memories of them, longing for simpler and happy times. Their young adulthood has been shaped by war, Hitler came into power when Opa was thirteen. Opa moved into increasingly smaller apartments when his parents' divorce was complete, and his father moved to Amsterdam before he was out of high school. The youth of Opa and Patti was not typical, or easy.

You might think it is odd that Ella is celebrating Easter since she isn't Christian (and really only barely celebrates Jewish holidays). Much like many families in America- regardless of their religious beliefs, it was typical for Germans to celebrate Christmas and Easter in festivities only. So easter egg hunt at Easter, Christmas tree at Christmas, but not overtly a religious holiday for them. Some people get offended by this but I think it's a little silly. Our religious holidays are tremendously affected by our culture, and likewise, our culture is tremendously affected by our religion (especially if we make it a big fun deal). We can't do ritual in a vacuum.

I did think it was odd that Ella mentions her surprise that August doesn't write to Opa and vice-versa. What is that about? I can sort of understand why August doesn't write to Ella, especially if his wife Emma was against it. But if it is possible for him to write to Opa and for Opa to write to him (Opa can write Ella).... then what's going on? I want to give August the benefit of a doubt since the writing stopped around the time of the invasion, but it's not like the Nazis don't know he's German. That information should have been clear. Or did they? Emma is also Jewish (remember- she's Ella's first cousin), so would he be trying to get her out of the country? Or hide her? I may have mentioned this before, but Anne Frank, the girl whose diary put a personal voice to the Jewish plight during the holocaust... she was hiding (eventually) not very far from where August lives. The mass extermination of Jews hasn't started happening yet, but the persecution and economic sanctions have. What's going on with August and Emma? This is a mystery I have yet to solve- and may never solve.