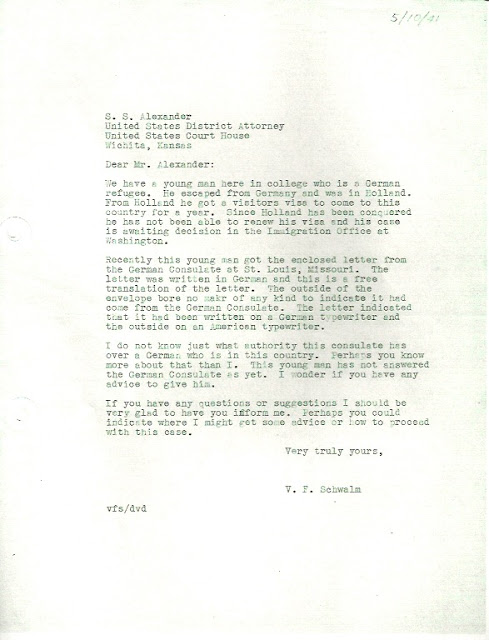 We have a young man here in college who is a German refugee. He escaped from Germany and was in Holland. From Holland he got a visitors visa to come to this country for a year. Since Holland has been conquered he has not been able to renew his visa and his case is awaiting decision in the Immigration Office at Washington.

Recently this young man got the enclosed letter from the German Consulate at St. Louis, Missouri. The letter was written in German and this is a free translation of the letter. The outside of the envelope bore no marker of any kind to indicate it had come from the German Consulate. The letter indicated that it had been written on a German typewriter and the outside on an American typewriter.

I do not know just what authority this consulate has over a German who is in this country. Perhaps you know more about that than I. This young man has not answered the German Consulate as yet. I wonder if you have any advice to give him.

If you have any questions or suggestions I should be very glad to have you inform me. Perhaps you could indicate where  I might get some advice or how to proceed with his case. 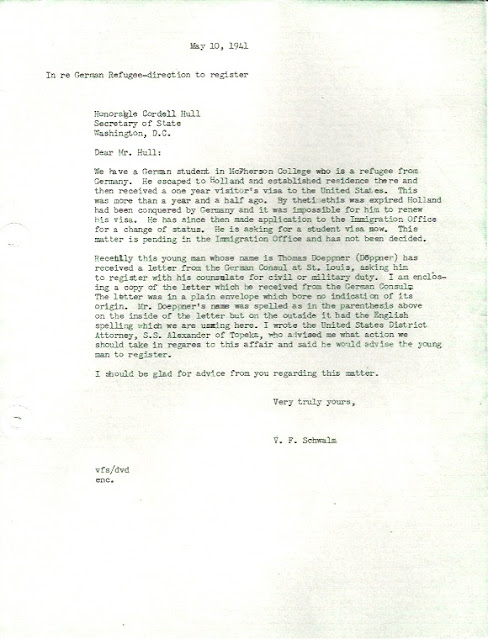 Letter from V.F. Schwalm  (President of McPherson College) to
Honorable Cordell Hull, Secretary of State (Yes- the one in DC!)

We have a German student in McPherson College who is a refugee from Germany. He escaped to Holland and established residence there and then received a one year visitor's visa to the United States. This was more than a year and a half ago. By the time this was expired Holland had been conquered by Germany and it was impossible for him to renew his visa He has since then made application to the Immigration Office for a change of status. He is asking for a student visa now. This matter is pending in the Immigration Office and has not been decided.

Recently this young man whose name is Thomas Doeppner (Döppner) has received a letter from the German Consul at St. Louis, asking him to register with his consulate for civil or military duty. I am enclosing a copy of the letter which he received from the German Consul. The letter was in a plain envelope which bore no indication of its origin. Mr. Doeppner's name was spelled as in the parenthesis above on the inside of the letter but on the outside it had the English spelling which we are using here. I wrote the United States District Attorney, S.S. Alexander of Topeka, who advised me what action we should take in regards to this affair and said he would advise the young man to register.

I should be glad for advice from you regarding this matter.

I'm overwhelmed by these two letters. It's not a fair comparison as I went to a very large University, but I'm almost positive I did not meet our president, and struggle to remember his name.

Opa has clearly reached out to the mentors in his life, he wrote to his advisors at the AFSC, and it seems that he also spoke with V.F. Schwalm about his dilemma with the German Consul. This was a particularly sensitive issue, as he didn't want to endanger his Mom in any way, especially when they were so close to getting her a visa.

V.F. Schwalm shows with these two letters that he has listened carefully to Opa's problems, and is able to articulate it very clearly to others. That's actually very impressive, it shows that he is invested enough in Opa's case to be up to date on his challenges and able to speak specifically about it. Not only is V.F. Schwalm invested and willing to help, he does this by writing to two people who are in incredible positions to help, or at the least to have good advice. I'm a little confused because both letters are dated May 10, 1941, but in the second letter he refers to the response he got from the first letter. The date on the first letter was pencilled in, so maybe on these copies it was just a guess or a notation of the general time these letters were sent. These letter copies are from the AFSC file we got on Opa, so I'm guessing there was some sharing of information between all the folks helping Opa.

The first person V.F. Schwalm wrote was the Attorney General in Kansas, which is a good call. This guy would know about the law and maybe have a good suggestion for what Opa's options are legally. Unfortunately, it sounds like that guy's advice was for Opa to register, which seems a bit like he didn't really think about it much. V.F. Schwalm didn't seem that impressed by that advice either and went just a few steps higher... he wrote the Secretary of State.

You guys. The Honorable Cordell Hull was the longest running Secretary of State to date, resigning only for health reasons. He received a Nobel Peace prize in 1945 for his help in advising on how to regroup Europe economically after the war (this is a gross simplification). I googled him and the first page that came up was a little biography on the Nobel Peace website, read it here. This guy hasn't won the prize in 1941, but he's still a big deal. My Opa's name was in front of this guy's nose!! That's just wild to me!

I wonder what gave Schwalm the audacity to write the Secretary of State? Did he know him? Either way, Schwalm was not afraid to stick his neck out for Opa. He didn't ever make any allusion that anyone might be worried about a German spy in the US, but wrote his letters with the assumption that the primary goal for everyone was to help this boy.

The first thing I thought of when I read these letters was the phrase "Lend your voice." It's a common enough phrase that I sort of forgot its literal meaning. V.F. Schwalm lends his voice to Opa. His is a voice of moderate power and prestige, the President at a College in America. He knows that Opa cannot write to the District Attorney or the Secretary of State and expect a response. But Schwalm's voice might fetch a response. So he lends his power and position to Opa, he lends his political pull to Opa, he lends his voice to help.

I'm challenged by this. Who am I able to lend my voice to? Who can I at the least give a megaphone to while standing alongside? Are there people without power or hope that need our voices? Schwalm spoke only about Opa. That's how you lend your voice- you let the other person speak with it. Today- I challenge you to go lend your voice.