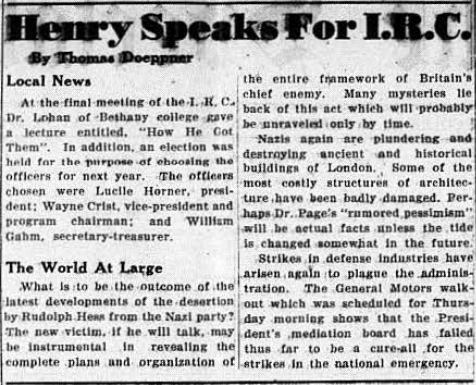 At the final meeting of the I.R.C. Dr. Lohan of Bethany college gave a lecture entitled, "How He Got Them". In addition, an election was held for the purpose of choosing the officers for next year. The officers chosen were Lucile Horner, president; Wayne Crist, vice-president and program chairman; and William Gahm, secretary-treasurer.

What is to be the outcome of the latest developments of the desertion by Rudolph Hess from the Nazi party? The new victim, if he will talk, may be instrumental in revealing the complete plans and organization of the entire framework of Britain's chief enemy. Many mysteries lie back of this act which will probably be unraveled only by time.

Nazis again are plundering and destroying ancient and historical buildings of London. Some of the most costly structures of architecture have been badly damaged. Perhaps Dr. Page's "rumored pessimism" will be actual facts unless the tide is changed somewhat in the future.

Strikes in defense industries have arisen again to plague the administration. The General Motors walk-out which was scheduled for Thursday morning shows that the Presidents mediation board has failed thus far to be a cure-all for the strikes in the national emergency.

So how about this Hess guy? I am baffled by him. He was Hitler's wing man in the early days and then in 1941 decided to fly himself (literally pilot a plane) to England to visit some guy about negotiating a peace treaty so that Germany wouldn't have to fight the war on two fronts (Germany was about to embark on a spring advance into Russia). The record is that he did this completely on his own, without the consent of any major political head (Hitler, or England). His life was sprinkled with a lot of crazy, and he was kept in England as a POW with relatively good treatment. Then the war ended and he was tried during the Nuremberg trials and sentenced to life in prison, and there he spent his life until his 3rd or 4th suicide attempt was successful and he died at the old age of 93. This is just the tip of the iceberg, you should go learn more about him if you are intrigued- bizarre man.

As of Opa's writing, people seem hopeful that he was deserting the Nazi party and would have helpful information, but it seems that he just had a very puppy-dog love for Germany and wanted to help her spread her wings to the east at whatever cost. No one will ever be able to clearly discern why he did what he did or who was really involved. Judging by what I've read of him, he may not have fully understood his own motivations. It seems Britain didn't get a huge amount of information from Hess other than that Germany was aiming for Russia. I think they already knew that was coming.

It saddens me to think about the people of London who time and again were forced underground or in shabby shelters (or just faced fate at home) during air raids while Germany bombed their monuments and homes. I forget to pause to think about the extent to which Britain bore the physical scars of this war. From the 7th of September in 1940 to May 1941, the infamous London Blitz raged on. The Germans thought that the Royal Air Force was close to defeat, so they developed this tactic to bomb London and important RAF sites in order to render the British without air power. This didn't work, but it left a mark. Denis Richard's book "Royal Air Force 1939-1945: The Fight At Odds" is quoted on the Wikipedia page with these statistics: "More than one million London houses were destroyed or damaged and more than 40,000 civilians were killed, almost half of them in the capital."

As of Opa's writing, the constant air raids on London are about to soften as Germany gives up and starts to focus on other things (like the Russian front). But in the midst of those raids, it must have looked dreary for Britain and for those watching from afar.

Meanwhile in the United States, union strikes are in the news again. FDR seems to have been pretty heavy handed in trying to quell the strikes, but not completely successful at stopping them.

What did Opa think when it looked like Britain was fading? Did he hope the US would hurry up and get in the war? But then that would impede any chances for his mother to come to the United States, and potentially put him, a German without a viable visa, in trouble.