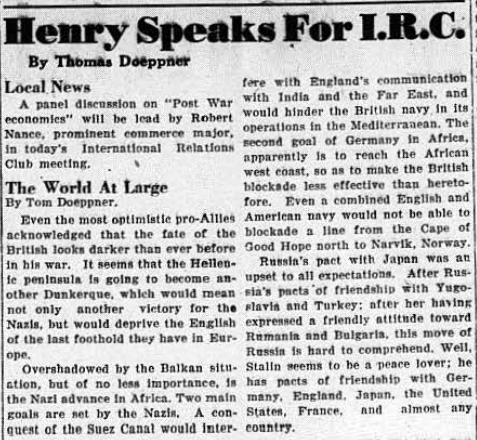 The World At Large
by Tom Doeppner

Even the most optimistic pro-Allies acknowledged that the fate of the British looks darker than ever before in his war. It seems that the Hellenistic peninsula is going to become another Dunkerque, which would mean not only another victory for the Nazis, but would deprive the English of the last foothold they have in Europe.

Overshadowed by the Balkan situation, but of no less importance, is the Nazi advance in Africa. Two main goals are set by the Nazis. A conquest of the Suez Canal would interfere with England's communication with India and the Far East, and would hinder the British navy in its operations in the Mediterranean. The second goal of Germany in Africa, apparently is to reach the African west coast, so as to make the British blockade less effective than heretofore. Even a combined English and American navy would not be able to blockade a line from the Cape of Good Hope north to Narvik, Norway.

Russia's pact with Japan was an upset to all expectations. After Russia's pacts of friendship with Yugoslavia and Turkey: after her having expressed a friendly attitude toward Romania and Bulgaria, this move of Russia is hard to comprehend. Well, Stalin seems to be a peace lover; he has pacts of friendship with Germany, England, Japan, the United States, France, and almost any country.

There go the Russians - doing whatever the hell they want to do again. We learn later in history that Stalin may have been worse than Hitler in terms of genocide and intolerant dictatorship- but right now he's just keeping the world on its toes.

Opa talks about this dark moment for the British when things look bad for them. I remember Opa saying to me how close Hitler came to winning the war. I think Opa really felt those gut-wrenching moments when you realize that you might witness the victory of hate. We all assume that good always wins, but in history, sometimes that victory is a long way away. There is a show on amazon prime called The Man in the High Castle. This show hypothesizes what the United States might look like with a Nazi victory. I've watched most of the first season, but have had difficulty returning to it. I think it's feeling too real of a possibility.

What is Opa imagining right now as it appears that there is a chance that the "good guys" might not win? I imagine it feels the same as it felt when he watched his own country deteriorate into a dictatorship under Hitler.

PS- in the next article we learn: Opa made the honor roll again! This was in the same newspaper, so I thought I'd throw it in for fun. And this Lucile lady that tops the list? She's one of Opa's girlfriends and I've been able to visit her recently. She's absolutely fantastic, and at 90 years old, still top of her class.