There will be no International Relations Club meeting today. Instead, we urge our members to listen to Kirby Page, who will speak at four o'clock in the Student Union Room.

Col. Charles Lindbergh resigned his commission as colonel in the U.S. Army Corps Reserve. In the letter Lindbergh referred to remarks made by President Roosevelt at a press conference Friday in which the President classed Lindbergh with the appeasers who urged peace during revolutionary and civil wars on the grounds that those conflicts could not be won.

His letter to the President said that Roosevelt had "clearly implied that I am no longer of use to this country as a reserve officer, and in view of other implications that you have made concerning my loyalty to my country, my character and my motives, I can see no honorable alternative to tendering my resignation.

In an apparent effort to bring the Greek campaign to an immediate close, German armed forces sped south from Thebes to cut the road running from Athens across the Corinth Canal to the Peloponnesus and there to trap Allied troops near the capital. Athens said that Australian rear-guard units massed on the slopes of Mt. Geraneia, overlooking the highway twenty five miles west of the capital, were bitterly engaging the Nazi forces, fighting against time to permit the escape of the remaining British troops from the Attican peninsula.

Other German forces in Greece surged ever nearer to Athens, and the Reich Air Force attended to bombing ships carrying British Expeditionary Forces away from the Greek mainland.

British military headquarters in Cairo announced that a concentration of Axis forces near Tobruk had been dispersed by intense artillery action from within the British held town.

Guys, go google Charles Lindbergh if you don't know about him. Fascinating guy. He's the one who made that crazy long nonstop flight in the Spirit of St. Louis. He also had a son who was kidnapped and murdered at the age of two. He had several children by his wife, and years after his death it was revealed that he also had a handful more by a few more women. He had a love-hate relationship with America's policies, and especially with FDR. He was an isolationist who did not want to join the war efforts. Because of his fame, FDR called him out for being a nay-sayer and Lindbergh resigned from his military post in protest of the public shaming. After Japan attacked the US, Lindbergh quickly joined the cause and flew missions for the United States in the war. FDR never really forgave him, and I gather Lindbergh never really felt fondly for FDR. Fascinating guy, and this whole feud was a bit of drama for the US with the war raging on in the background.

The war raging in Greece sounds intense, with British forces retreating over a narrow canal to the west or by sea to the south of Athens and hoping to make it out before the German forces arrive. Australians are peppering the Nazis from the top of a mountain and the Greeks are stuck in the midst. 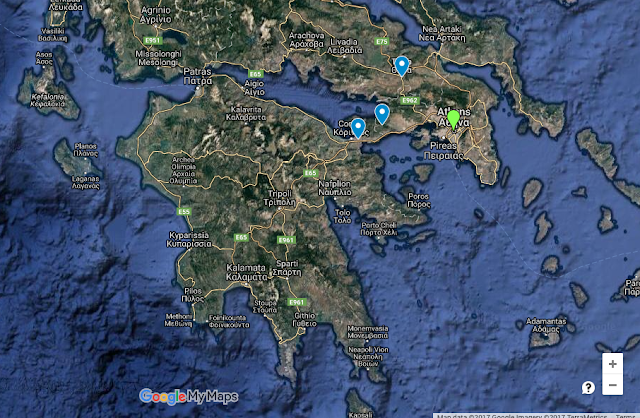 This is the lower portion of Greece. The green dot to the right is the capital, Athens. The blue dot that is farthest north is Thebes- where the Germans were marching from. The blue dot in the middle is the Mountain where the Australians were trying to hold off the Nazis long enough for the British to have traveled from Athens to the Corinth canal (the blue dot furthest to the left). The Corinth canal has a bridge over which the troops could get to the Peloponnesus (the large body of land to the left). If the troops are caught in Athens, they have only that small amount of land to get away- and the Reich Air force was already gunning at the ships trying to get away from the ports on the Athen's side. An escape to the left (west) gives the British a little more time and hopefully some ships coming in on that side to get them out. Or to restock them so they can go back. No idea what they actually did- but it is very interesting to pay attention to the way geography plays a role in the war.

Also- I just can't help but think- where did ALL these people come from? I know it was a draft, but my goodness, soldiers are everywhere. There could not have been one able-bodied man at home. How devastating.

Meanwhile, Opa is paying attention to all of this and working hard at getting his mother out of the center.
Posted by Sarah Snow at Tuesday, October 11, 2016