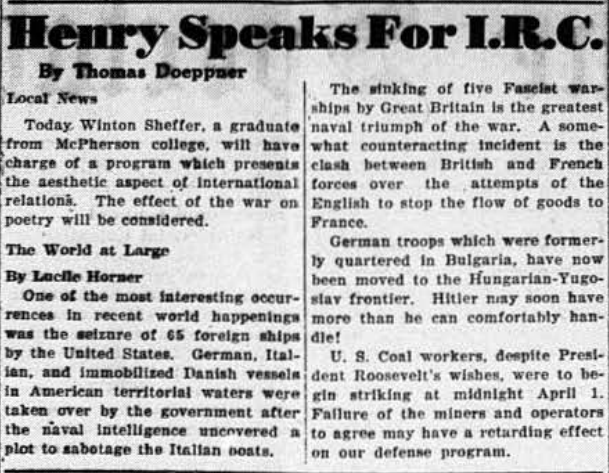 Henry Speaks for the I.R.C.
By Thomas Doeppner

Today Winston Sheffer, a graduate from McPherson College, will have charge of a program which presents the aesthetic aspect of international relations. The effects of the war on poetry will be considered.

The World at Large
By Lucille Horner

One of the most interesting occurrences in recent world happenings was the seizure of 65 foreign ships by the United States. German, Italian, and immobilized Danish vessels in American territorial waters were taken over by the government after the naval intelligence uncovered a plot to sabotage the Italian boats.

The sinking of five Fascist warship by Great Britain is the greatest naval triumph of the war. A somewhat counteracting incident is the clash between British and French forces over the attempts of the English to stop the flow of goods to France.

German troops which were formerly quartered in Bulgaria, have now been moved to the Hungarian-Yugoslav frontier. Hitler may soon have more than he can comfortably handle!

U.S. Coal workers, despite President Roosevelt's wishes, were to begin striking at midnight April 1. Failure of the miners and operators to agree may have a retarding effect on our defense program.

Ok so it seems very clear that the US is in it, they are not not fighting. Like couples who are not not trying to have kids. Often a kid results. The US has made their intentions clear and it seems only a matter of time before they move from financial allies to military allies.

This US Coal workers strike is an interesting one and develops over time. President Roosevelt was a powerful president who did a lot of good, but sometimes that was by stepping on the backs of workers like the coal miners. I was shocked to find that FDR really did some questionable stuff to get his way. I believe he was in the interest of squashing strikes as often as he could so that they defense program could keep rolling (as it obviously was rolling towards war).