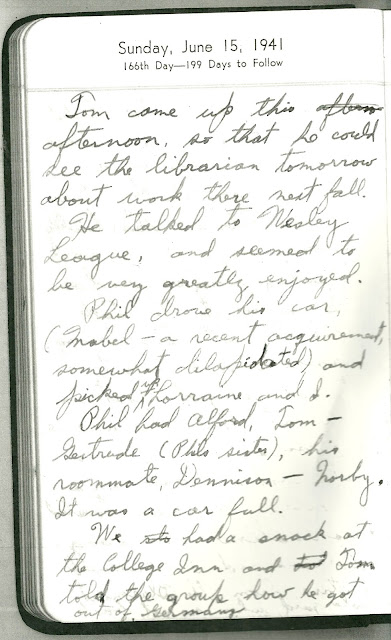 A page out of Herb Michael's diary, Opa's roommate

Tom came up this afternoon, so that he could see the librarian tomorrow about work there next fall.

He talked to Wesley League, and seemed to be very greatly enjoyed.

Phil drove his car, (Mabel - a recent acquirement, somewhat dilapidated) and picked up Lorraine and I.

Phil had Alford, Tom- Gertrude (Phil's sister), his roommate, Dennison- - Lorby. It was a car full.

We had a snack at the College Inn and Tom told the group how he got out of Germany.

In case you guys were wondering just how deep we have dug for the details on this story- this is how deep. We found the diary of a roommate of Opa's while he was in McPherson. Boom. Seriously though, Herb's wife Marianne and his daughter Elizabeth were  so incredibly kind to copy these pages out of his diary and answer some questions about Opa. Marianne told me rather wistfully about how she remembered Opa's "Dark brown eyes" - I think she may have wanted to date him! We've got a handful of pages from this diary that give some day-to-day details of Opa's life and life in McPherson.

I absolutely love this entry because college doesn't change does it? Phil has a clunker car he named Mabel and fills it with his friends on their way to an event. Seriously, how big was that car? There were at least 7 or 8 folks crammed in there. Love it.

Here's my favorite line though: "We had a snack at the College Inn and Tom told us how he got out of Germany."

I really wish that diary page was bigger though, I'd love to hear the details from Herb's perspective.