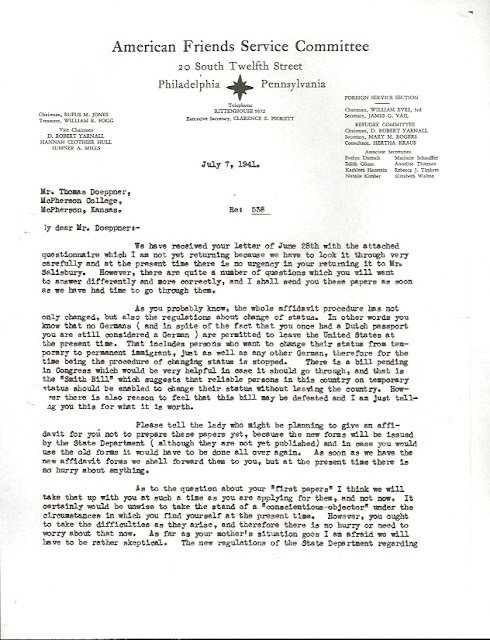 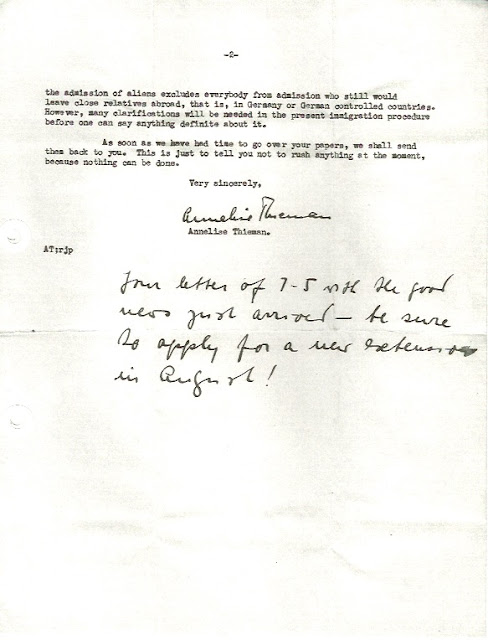 We have received your letter of June 28th with the attached questionnaire which I am not yet returning because we have to look it through very carefully and at the present time there is no urgency in your returning it to Mr. Salisbury. However, there are quite a number of questions which you will want to answer differently and more correctly, and I shall send you these papers as soon as we have had time to go through them.

As you probably know, the whole affidavit procedure has not only changed, but also the regulations about change of status. In other words you know that no Germans (and in spite of the fact that you once had a Dutch passport you are still considered a German) are permitted to leave the United States at the present time. That includes persons who want to change their status from temporary to permanent immigrant, just as well as any other German, therefore for the time being the procedure of changing status is stopped. There is a bill pending in Congress which would be very helpful in case it should go through, and that is the "Smith Bill" which suggests that reliable persons in this country on temporary status should be enabled to change their status without leaving the country. However there is also reason to feel that this bill may be defeated and I am just telling you this for what it is worth.

Please tell the lady who might be planning to give an affidavit for you not to prepare these papers yet, because the new forms will be issued by the State Department (although they are not yet published) and in case you would use the old forms it would have to be done all over again. As soon as we have the new affidavit forms we shall forward them to you, but at the present time there is no hurry about anything.

As to the question about your "first papers" I think we will take that up with you at such a time as you are applying for them, and not now. It certainly would be unwise to take the stand of a "conscientious-objector" under the circumstances in which you find yourself at the present time. However, you ought to take the difficulties as they arise, and therefore there is no hurry or need to worry about that now. As far as your mother's situation goes I am afraid we will have to be rather skeptical. The new regulations of the State Department regarding the admission of aliens excludes everybody from admission who still would leave close relatives abroad, that is, in Germany or German controlled countries. However, many clarifications will be needed in the present immigration procedure before one can say anything definite abut it.

As soon as we have had time to go over your papers, we shall send them back to you. This is just to tell you not to rush anything at the moment, because nothing can be done.

Your letter of 7-5 with the good news just arrived - be sure to apply for a new extension in August!

There's a lot of information in this letter. I think the thing it highlights best is the constant changing and morphing of immigration law in war time, and how that affected people like Opa and his mother. It also shows just how on top of it the folks had to be at the American Friends Service Committee (AFSC) and other refugee placement agencies. Annelise says that Opa doesn't need to hurry, and it has nothing to do with the urgency of his or his mother's situation (which is fairly urgent), but the fact that they know everything is about to change, so they have to wait for the new forms to roll out and start all over again with a new strategy.

Annelise advises Opa not to worry about his concerns with the conscientious objector thing. It's very much a "cross that bridge when you come to it" and "you have more pressing things to worry about."

I tried to look up the Smith's bill, and while I found something it was about an anti-strike bill, so I may have to dig deeper (or see if the immigration thing got slapped onto a larger unrelated bill). If it did pass, the papers will likely show us later.

As for Ella, things are not looking good for her chances to immigrate. The German consulates are closed in America. Opa is not allowed to leave the country (which I'm sure he doesn't really mind at the moment). But for Ella, another policy stands in her way. As Annelise presents it: Germans are not allowed to immigrate if they leave close family behind in Germany. There are a handful of ways this policy might have come to be... most of my dreamt up reasons don't stand to logic. I thought, maybe America is nervous about German spies reporting home to their family? But last I checked, spies usually report home to the government. Or a liaison to the government. Either way, couldn't you just be super mean and censor their mail? Seems less mean than not letting them immigrate on the off-chance they're spies. (And since when do folks immigrate and then immediately have access to high-level military information?) Ok so maybe the reasoning is that these other family members could and should take in their relatives who are at risk. This of course is a bit ridiculous as many of the folks who are looking to leave (the refugee portion) are leaving because they are Jewish- and none of their jewish relatives are safe or can protect them. I can't figure it out. Again- another thing to research, but I may never figure it out completely. The thing Annelise does allude to is that the immigration law is (as always) subject to translation, so consuls might interpret those guidelines in various ways.

Regardless, Opa is stuck (happily) with a temporary reprieve on his haste to figure out his visa. Ella's fate, on the other hand, seems to be tangled deeper into the jungle of Nazi Germany, and it is a matter of how long she can remain hidden in plain view of her oppressors.

This letter made me sad the first time I read through it. Then as I did research, I found myself becoming numb to the reality before me. I wonder if that's how Opa felt. None of the news lately has been good for his mother. There was a short time of optimism when he had an affidavit, when there was some shining possibility that he could request her or her number would be up soon. Then the affidavit wasn't good enough, Opa's visa not secure enough, the consulates closed. Things started closing up and the light began to flicker. We're used to the bad news now and wouldn't trust good news if it appeared. Did Opa become numb in his necessity to accept the inevitable? That his mother was not going to make it to the United States? That there was nothing he could do? Now his only goal was to keep himself safe and keep knocking on that padlocked door, just in case. His goal was to keep writing, keep hoping for her, not in belief that she would be able to leave Germany, but in that buoyant emotion that keeps people alive when nothing looks good.

When is that moment when Opa and Ella both know she won't make it to America? This could be it.