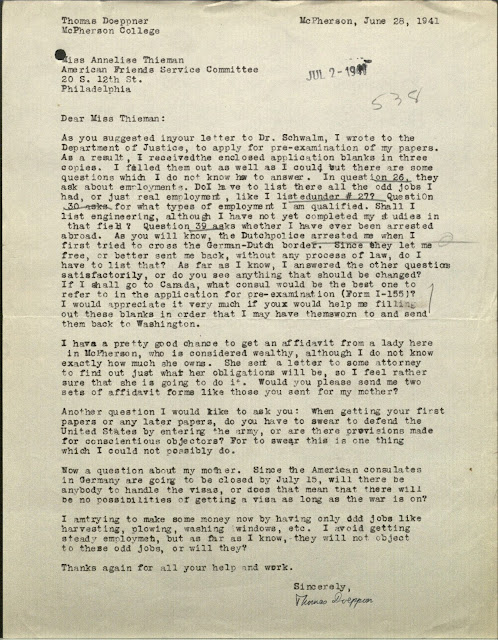 As you suggested in your letter to Dr. Schwalm, I wrote to the Department of Justice, to apply for re-examination of my papers. As a result, I received the enclosed application blanks in three copies. I filled them out as well as I could but there are some questions which I do not know how to answer. In question 26, they ask about employments. Do I have to list there all the odd jobs I had, or just real employment, like I list under #27? Question 30 asks for what types of employment I am qualified. ShallI list engineering, although I have not yet completed my studies in that field? Question 39 asks whether I have ever been arrested abroad.  As you will know, the Dutchpolice arrested me when I first tried to cross the German-Dutch border. Since they let me free, or better sent me back, without any process of law, do I have to list that? As far as I know, I answered the other questions satisfactorily, or do you see anything that should be changed? If I shall go to Canada, what consul would be the best one to refer to in the application for pre-examination (Form I-155)? I would appreciate it very much if you would help me filling out these blanks in order that  I may have them sworn to and send them back to Washington.

I have a pretty good chance to get an affidavit from a lady here in McPherson, who is considered wealthy, although I do not know exactly how much she owns. She sent a letter to some attorney to find out just what her obligations will be, so I feel rather sure that she is going to do it. Would you please send me two sets of affidavit forms like those you sent for my mother?

Another question I would like to ask you. When getting your first papers or any later papers, do you have to swear to defend the United States by entering the army, or are there provisions made for conscientious objectors? For to swear this is one thing which I could not possibly do.

Now a question about my mother. Since the American consulates in Germany are going to be closed by July 15, will there be anybody to handle the visas, or does that mean that there will be no possibilities of getting a visa as long as the war is on?

I am trying to make some money now by having only odd jobs like harvesting, plowing, washing widows, etc. I avoid getting steady employment, but as far as I know, they will not object to these odd jobs, or will they?

Thanks again for all your help and work.

The process of immigration and staying in America is extremely complicated, and remains so. My following thoughts are based on my limited knowledge so far, so I may not be perfectly accurate in my descriptions.

Opa has been given an extension on his temporary status through September. He has until then to get his visa sorted. The direction he is going right now is to apply for re-examination and leave and re-enter the United States on a permanent immigration visa. From listening to the immigration attorney speak at a local non-profit recently, I realized that Opa's unfortunate encounter at Ellis Island resulted in receiving a temporary visa, rather than a student visa or other more permanent visa. That temporary visa he got seems like a visitors visa, which are only intended for folks who are visiting temporarily, and have no intention of staying. That's why he is not allowed to work, a visitor shouldn't be working, a steady job shows that the stay is not intended to be temporary.

Opa has been trying to get a more permanent visa so he can have some of the rights and privileges of someone who intends to stay in the United States indefinitely. The student visa doesn't quite solve his problem as fully as he needs it to (it still functions as a temporary visa, and isn't too different from a visitor's visa in some of the rights and privileges to work). The best option is for him to leave, then re-enter under a more permanent visa. This sounds and feels really weird and lame. It's sort of like he's doing a do-over of his Ellis Island experience, but with some protective paperwork and pre-planning that will get him a better shot at getting the kind of visa he needs. I thought this was weird that the most efficient way a person can get a good visa is to basically hit re-start on the process and try it again. But this is still a thing.

Opa wants to get his facts straight so he can do it right this time. I'm so grateful to the AFSC for providing the kind of counseling and advice that he needs to navigate the immigration process.

One of Opa's questions pops out at me as important to highlight. He asks if he needs to affirm his willingness to defend the United States by joining the army in the future as he is filling out immigration and papers for residency. His eventual goal as he has stated before, is to become a United States citizen. He is asking if there are provisions for conscientious objectors, because he is not willing to join an Army. This is interesting to note because my Opa served in the United States Army for 29 years. Something changed between this note and the day he joined the US Army. I'm intrigued to find out what it was. The way he told the story (shortened version) to us kids is that he always wanted to join the US military. Now I know that that wasn't  actually the case.

Opa's question about his mother fills the bottom of this letter with the lead feeling of deflated hope. He's asking Annelise to give it to him straight: is there any hope for his mother?

Is there any hope?