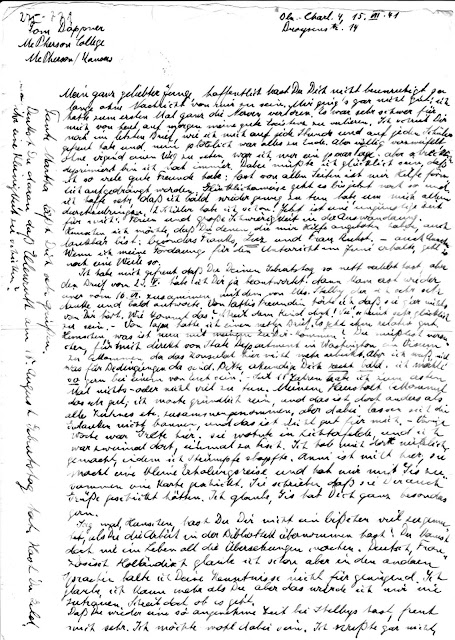 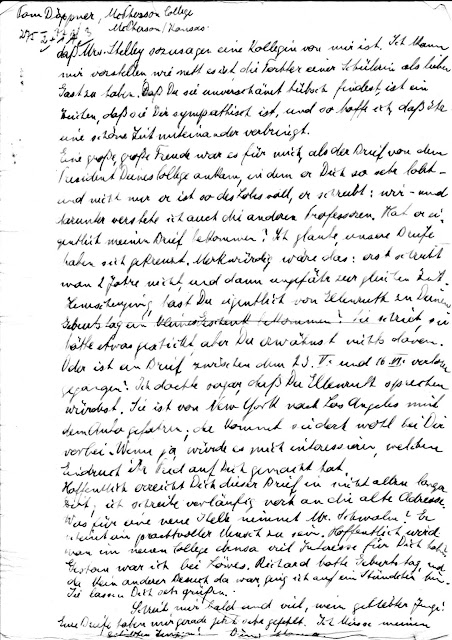 Hopefully you have not been too worried, to be without news from me for such a long time.  I have not been well, for the very first time  I lost my nerve totally. It was very difficult for me to lose my beloved livelihood from one day to the next. In my last letter I wrote to you how much I enjoyed every lesson and every pupil, now suddenly everything came to an end. For a few days I was in total despair, not seeing a way out, now I am still terribly depressed. Even though I should be happy to have so many good friends, from all sides help is almost forced unto me.

Luckily I will be ok for a while, and I hope soon I will have enough to do again to be able to manage on my own. I already have 2 pupils. Now is an unfavorable time for me, it is vacation time, and there are many difficulties with many emigrations. Hunschen, I want you to thank all who offered to help me as well, especially Frank’s, Luz and Mrs. Ruhst, also Annchen. If I can collect the outstanding fees for my June lessons, I will be ok for a while.

It pleases me that you celebrated your birthday so nicely, I already replied to your letter of May 23rd. Then the next one came, dated June 16th, also a letter from Mrs, Shelley for which I am very grateful, I will answer her soon. From Patti's girlfriend I heard that she (Patti) does not get news from you. Why is that? Write to that child. She seems to be very happy. I had a nice letter from Papa. He seems to be doing fairly well.
Hunschen, what is going on with my situation in coming to you? Hunschen, you should try to get a visa for me straight from the State Department in Washington, since the consulate here is not in operation anymore. But I don't know about the conditions there.

Hunschen, please find out very soon. I want so much to be with one of you two. Since 11 years, I have for the first time nothing to do, or almost nothing. My household profits from that, I do lots of good cleaning, but cannot keep the worries away, and that is not good for me. Last week Grete was here, she lives in Lichterfelde, I visited twice, one time for dinner. I tried to be of use, helping her to mend socks. Anni is not at home, she is taking a little vacation trip
and sent a card to me and Gis. She wrote she had sent greetings to you also. I think Gis likes you especially much.

Hunschen, have you not taken on too much, like the work at the library. You cannot, for your life, do all those translations. German, French and Dutch, I believe you can do, but I think your knowledge in the other languages is not sufficient. I believe I know more than you, but I would never attempt it. Do write, though, whether that goes forward.

I’m so glad you’re having such a nice time at the Shelleys’ again. I would like to be there. I didn’t know Mrs. Shelley was a colleague of mine, so to speak. I can imagine how nice it is to have the daughter of a student as a dear guest. The fact that you unashamedly find her pretty is an indication that she is nice to you, and so I hope you have a nice time together.

It was a great, great joy for me when the letter from the president of your college arrived, in which he praised you so highly, and it’s not just him who is so full of praise; he writes: we – and I take that to mean the other professors too. Did he actually get my letter? I think our letters must have crossed each other [in the mail]. That would be noteworthy: first people don’t write to each other for two years, and then at basically the same time. Hunschenjung, did you by chance receive a small present from Ellenruth for your birthday? She wrote that she sent something, but you haven’t mentioned anything about it. Or did a letter from between May 23 and June 16 get lost? I even thought you would have spoken to Ellenruth. She drove from New York to Los Angeles; she would have passed right by you. If so, I’d be interested in what kind of impression her Fred(?) made on you.

Hopefully this letter reaches you before too long, for the moment I’m still writing to your old address. What is the new position that Mr. Schwalm is taking? He seems to be a wonderful person. Hopefully they will show just as much interest in you at the new college? Yesterday I was at the Löwes’. It was Richard’s birthday, and since they didn’t have any other company, I went over for a little bit. They send their greetings.

Aunt Martha tells you hello. Will you remember that Ellenruth's birthday is on August 15th? Do you have something small to send to her?

Ella is uncharacteristically vulnerable with Opa about how she is emotionally and financially. There seems to have been a fall-out for her as far as her livelihood is concerned. As a jewish woman, she is severely limited in her ability to support herself. She has been tutoring privately for income. Something happened where she says that she lost her beloved livelihood from one day to the next. I am confused about what happened, and why this happened so suddenly.

The only thing that I can work out is this: the closing of the German and Italian consulates in the United States. Ella's last letter was in June, on the day that FDR announced the closing of the consulates to be effective in July. I think I was talking to a family member about this letter and we hypothesized that most of Ella's students were people who were preparing to leave for the United States and were being tutored in English. Once they no longer had the possibility of leaving, they no longer felt the need to pay for tutoring. This is a pretty good guess and would explain Ella's despair as it not only closed a door in her hopes of emigrating, but it also could have potentially wiped out the demand for her tutoring services. In the end, it's just a guess, I'm not sure if that was what happened.

I kind of love Ella's wit even in sync with her despair. She was depressed, but grateful: "Even though I should be happy to have so many good friends, from all sides help is almost forced unto me." Ella hates not being self-sufficient. Whatever happened has made her even more dependent on others, and it drives her nuts. She turns a hopeful tune and says perhaps she will recoup some students, though it is summer time and emigration everywhere is hard.

The next part would make me very nervous if I were Opa. She asks him to thank people who helped her... and those people are her neighbor, his aunt, and others who live in Germany. What's that about? Why can't she thank them herself? Where does she think she's going? This part made me very nervous for Ella. This is a strange request followed by an unusual show of despair. What is happening?!

Then, as if a light flipped on, her tone completely shifts for the rest of the letter where she talks happily about his birthday and the family and chides Opa into writing everyone more. She even puts in a nice "I think Gisela likes you." Grete is Grete Stumpf, one of the Quaker women in leadership who helped people like Ella, mostly keeping them connected to a community of people who cared when they couldn't help them immigrate.

Ella talks about Ellenruth, her niece (Opa's first cousin) and asks if he received a gift from her. Later she encourages him to write her and send her a little gift for her upcoming birthday. I recently visited Ellenruth's daughter in Seattle, where I saw the pictures from her trek across the US from New York to LA. I don't think they stopped by to see Opa, but at the time I'm not sure they were really in touch (despite how much Ella seemed to be trying to get them to communicate). Fred is actually Alfred, or Allie as they later called him. This was Ellenruth's husband at the time, and her daughter's father. A side note, Ellenruth's parents were mortified that Ellenruth was with him (he was much older than she) and that she left a good job in New York to travel west with him. I wonder if Ella is trying to get the scoop on Fred and see if he's as bad as her sister makes him out to be.

Also- randomly- August wrote to Ella? She has never mentioned a letter directly from him and actually complained that he didn't write. And here we have Opa's letters- and August is silent starting in May 1940. What's that about?

The last half of the letter is completely different from the first half... it's as if she sat down to write and then returned later when she was in better spirits. But the first half must have haunted Opa in a way. Ella usually qualifies her despair saying that things will work out- this letter doesn't have quite the same tone to it. She urges Opa to see if he can't get her a visa right from Washington (which he does not live near at all). Her desperation is apparent. What does Opa do? It has to be torture to watch Ella breaking.