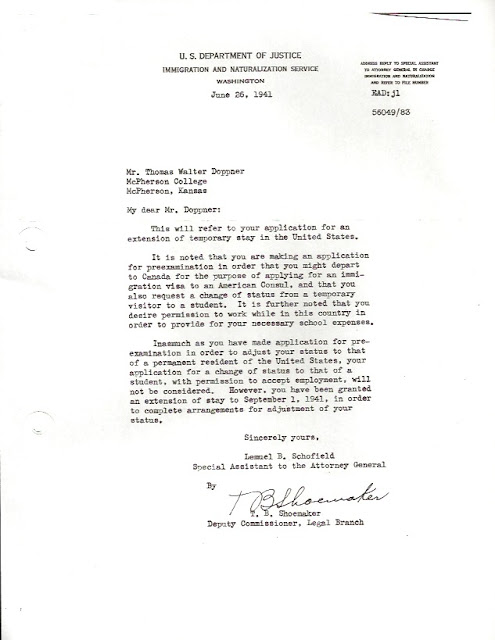 Letter from Department of Justice, Immigration and Naturalization Service to Opa

US Department of Justice
Immigration and Naturalization Service
Washington
June 26, 1941

This will refer to your application for an extension of temporary stay in the United States.

It is noted that you are making an application for pre-examination in order that you might depart to Canada for the purpose of applying for an immigration visa to an American Consul, and that you also request a change of status from a temporary visitor to a student. It is further noted that you desire permission to work while in this country in order to provide for your necessary school expenses.

Inasmuch as you have made application for pre-examination in order to adjust your status to that of a permanent resident of the  United States, your application for a change of status to that of a student, with permission to accept employment, will not be considered. However, you have been granted an extension of stay to September 1, 1941, in order to complete arrangements for adjustment of your status.

Lemuel B. Schofield
Special Assistant to the Attorney General

I had to read that last paragraph four times to understand exactly what it was saying yes and no to. First things first: Opa's temporary visa has been extended, so he is now a legal resident until September 1, 1941. Note that it is June, so that's not an extremely long time to have an extension, but he will take whatever he can get.

The last paragraph seems to state that Opa cannot be considered for a student visa with work permission if he has applied for pre-examination to adjust his status to that of a permanent resident. This is sort of what he was concerned about when he was writing with the AFSC earlier- he just wants the easiest, shortest way to legal residency. So now it looks like he may need to get approval to leave through Canada and re-enter on an immigration visa for permanent residency.

I volunteered at a local organization last night that helps people with immigration concerns. There are lawyers there who are equipped to legally represent folks or at least advise them on their next steps. I was able to speak with one individual who had a story not so starkly different from Opa's, and while listening to the attorney's advice, I was struck by how similar the struggle with immigration is today. The person working towards legal status are constantly at the mercy of how their particular consulate will interpret the law. As the lawyer spoke last night, I imagined Opa hearing the advice of those at the AFSC and the responses from the Department of Justice. As the person in front of me last night teared up because things were still so complicated and difficult, I teared up too. I teared up for this person, but I also teared up for all the people who have been stuck in the in-between of immigration law- doing everything right but not finding a simple answer for their next step.

After this letter, Opa is OK, for now. His status is still temporary, his future still unknown, and his next steps still a bit hazy. I assume he will look into making a trip to Canada to re-enter on an immigration visa. If you are in the United States on a temporary visa, it helps to get permission to leave and then re-enter the US on a more permanent visa. It's complicated, and it takes an immigration lawyer to explain it. Last night, when hearing the lawyer talk about all the cases, I began to see just how complicated immigration law is, and without a lawyer to represent you, it would be very easy for an immigrant to be turned away or refused services or rights that they are entitled to. It was fascinating.

Even after all the vetting and laborious process, someone could still get the boot for no reason at all.
Posted by Sarah Snow at Wednesday, February 08, 2017