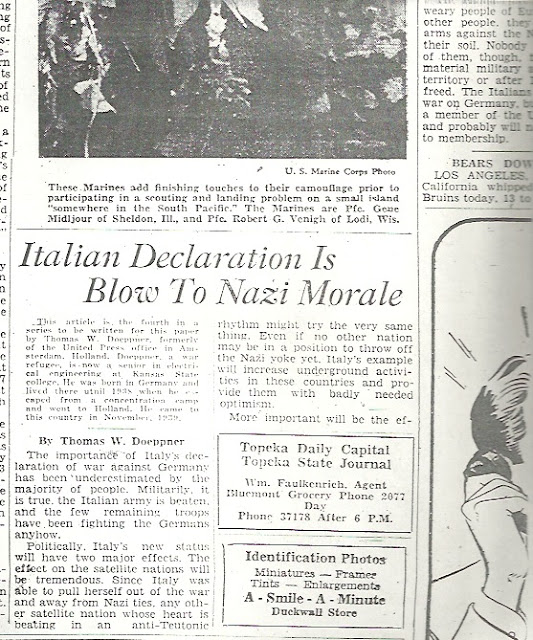 Article in the Manhattan, Kansas Mercury Chronicle, By Opa

This article is the fourth in a series to be written for this paper by Thomas W. Doeppner, formerly of the United Press office in Amsterdam, Holland. Doeppner, a war refugee, is now a senior in electrical engineering at Kansas State college. He was born in Germany and lived there until 1938 when he escaped from a concentration camp and went to Holland. He came to this country in November, 1939.

The importance of Italy's declaration of war against Germany has been underestimated by the majority of people. Militarily, it is true, the Italian army is beaten, and the few remaining troops have been fighting the Germans anyhow.

Politically, Italy's new status will have two major effects. The effect on the satellite nations will be tremendous. Since Italy was able to pull herself out of the war and away from Nazi ties, any other satellite nation whose heart is beating in an anti-Teutonic rhythm might try the very same thing. Even if no other nation may be in a position to throw off the Nazi yoke yet. Italy's example will increase underground activities in the countries and provide them with badly needed optimism.

More important will be the ef-

I apologize that we did not copy the entire article. When my husband spent the day in the archives in Kansas, speed and quantity was the name of the game! So unfortunately, we won't know (until we go back maybe) what the most important thing to Opa was.

These are the details I don't remember learning in history class. I may very well have been taught them, I just wasn't paying enough attention. This Italian switch helps explain a mystery that I encountered through my own family's story. A mystery that shouldn't have been all that mysterious if I had paid closer attention in class.

When Italy essentially defected and turned around to declare war against Germany, not only did it help the overall war effort in ways that Opa begins to outline here, but it helped his uncle survive. Kurt, who was Opa's uncle (his mother, Ella's baby brother), had been interned in Italy for quite sometime. In the beginning his internment was simply a confinement to a geographical location. He was free to roam the city and carry on life with relative ease. It wasn't freedom, but it wasn't what the Nazis had in mind when they asked the Italians (as allies) to intern all Jews. When the Nazis moved into Italy and began to take matters into their own hands, Kurt's situation worsened exponentially.

Kurt was "lucky" to have the linguistic gene that much of Opa's family held, and was pegged to be a translator for a Nazi official who brought him on his local travels. Once Italy's intentions to stop supporting the Nazis had become clearer, both Kurt and the Nazi officer had some decisions to make. Typically, when the Nazis started losing ground, their way of leaving a concentration camp was either to march the prisoners with them, or if there was no time, to murder the inhabitants. Kurt likely did not know this for sure, but under Nazi rule, life was never a guarantee, even if they were losing ground.

The Nazi officer that had taken Kurt as a sort of personal assistant asked Kurt one day: "do you want to be a free man?" Kurt was no stranger to Nazi mind games and was fearful to answer in a direct way for fear of punishment. He answered "What man doesn't?" Thus began the conversation when the officer told Kurt he was planning to defect and would give Kurt his uniform, which would possibly afford him a way of escape, or with the tide turning, could cause him danger. Kurt took the risk, and it paid off. He ended up (through a series of adventures that I don't know all of the details) becoming a steward on a British boat, I believe in the Mediterranean? I need to go back to my source, but needless to say Kurt somehow found himself free, and working, but before the war ended. This entire story confused me because I didn't understand (beyond a German uniform) how someone could so easily leave Italy and go into allied territory. There are certainly some gaps in my understanding of the story, but Italy's changed tune and the basic chaos of the changing war effort, likely gave Kurt the best shot at escaping. And he succeeded, an unlikely story once under the Nazi nose.

Italy and Russia turned against Germany, but Germany's ridiculous confidence and assurance that they alone should rule the world (or at least the European continent) was a big part of their downfall. If they were not so hung up on their need for "living space" for their superior selves, and rather maintained their alliances- they'd have won the war.

For Italy to declare war let Germany know that they had not actually taken over that country for themselves, and they could not relax that front.

I'm finding that morale plays a major part in a nation's ability to win a war. Morale of the soldiers and citizens alike is the backbone of the whole operation.
Posted by Sarah Snow at Tuesday, May 01, 2018