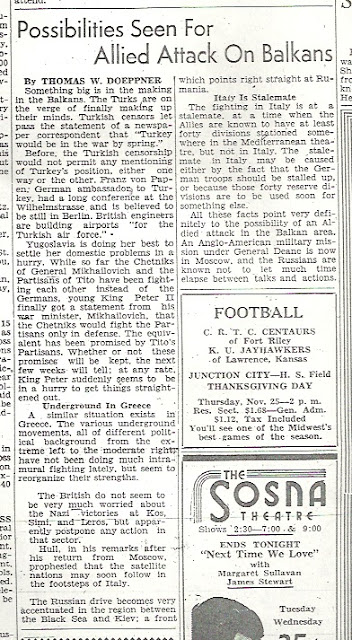 Article by Opa in Manhattan, Kansas' newspaper, The Mercury Chronicle

Something big is in the making in the Balkans. The Turks are on the verge of finally making up their minds. Turkish censors let pass the statement of a newspaper correspondent that "Turkey would be in the war by spring."

Before, the Turkish censorship would not permit any mentioning of Turkey's position, either one way or the other. Franz von Pappen: German ambassador to Turkey, had a long conference at the Wilhemstrasse and is believed to be still in Berlin. British engineers are building airports "for the Turkish air force."

Yugoslavia is doing her best to settle her domestic problems in a hurry. While so far the Chetniks of General Mikhailovich and the Partisans of Tito have been fighting each other instead of the Germans, young King Peter II finally got a statement from his war minister, Mikhailovich, that the Chetniks would fight the Partisans only in defense. The equivalent has been promised by Tito's Partisans. Whether or not these promises will be kept, the next few weeks will tell; at any rate, King Peter suddenly seems to be in a hurry to get things straightened out.

A similar situation exists in Greece. The various underground movements, all of different political background from the extreme left to the moderate right, have not been doing much intramural fighting lately, but seem to reorganize their strengths.

The British do not seem to be very much worries about the Nazi victories at Kos, Simi, and Leros, but apparently postpone any action in that sector.

Hull, in his remarks after his return from Moscow, prophesied that the satellite nations may soon follow in the footsteps of Italy.

The Russian drive becomes very accentuated in the region between the Black Sea and Kiev; a front which points right straight at Rumania.

The fighting in Italy is at a stalemate, at a time when the Allies are known to have at least forty divisions stationed somewhere in the Mediterranean theatre, but not in Italy. The stalemate in Italy may be caused either by the fact that the German troops should be stalled up, or because those forty reserve divisions are to be used soon for something else.

All these facts point very definitely to the possibility of an Allied attack in the Balkan area. An Anglo-American military mission under General Deane is now in Moscow, and the Russians are known not to let much time elapse between talks and actions.

A brief glance over the history time lines tells me this prediction didn't fully come to pass, but Opa can't be right all the time. The war quiets down a little during the winter, a forced lull in the fighting and opportunity for nations to regroup and plot. There is no relaxing, but there isn't much luck or wisdom in trying to do anything big in the winter.

I kind of chuckled while reading this, thinking, if Opa could guess future plans, wouldn't the Germans be a step ahead too? I imagine the risk of guessing correctly (and thereby giving the enemy something to plan for) was overshot by the sheer volume of guesses and conjecture by the political and war reporters across the globe. A 20-something year old in Kansas likely did not make top billing for Nazi censors and spies to watch for information. It is funny though, because in some propaganda from the war you see posters admonishing Allied citizens to keep quiet, you never know if a Nazi spy is listening! Yet, we can write full length articles about battle plans.

Opa has a grasp on the world players, the skirmishes in some smaller nations that others may not even think about. Nations like Turkey and Greece are getting their act together, and Opa wonders what for. Where did Opa get his detailed information? What was he reading and listening to that informed his articles? I'm sure he had a knack for it, growing up under the sharp eyes and ears of his journalist father.

My favorite line of this whole article is when Opa comments on the cooperation of normally conflicting parties by saying they "have not been doing much intramural fighting lately." That just pulls into perspective how mammoth-sized this world war is. Those civil wars and political infightings of a nation, those are mere intramural games that are paused to collect and fight the larger battle.
Posted by Sarah Snow at Tuesday, May 15, 2018