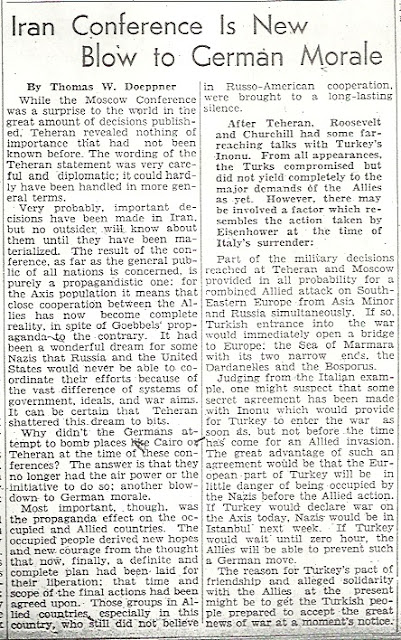 While the Moscow Conference was a surprise to the world in the great amount of decisions published, Teheran revealed nothing of importance that had not been known before. The wording of the Teheran statement was very careful and diplomatic; it could hardly have been handled in more general terms.

Very probably, important decisions have been made in Iran, but no outsider will know about them until they have been materialized. The result of the conference, as far as the general public of all nations is concerned, is purely a propagandistic one: for the Axis population it means that close cooperation between the Allies has now become complete reality, in spite of Goebbels' propaganda to the contrary. It had been a wonderful dream for some Nazis that Russia and the United States would never be able to coordinate their efforts because of the vast difference of systems of government, ideals, and war aims. It can be certain that Teheran shattered this dream to bits.

Why didn't the Germans attempt to bomb places like Cairo or Teheran at the time of these conferences? The answer is that they no longer had the air power or the initiative to do so; another blow-down to German morale.

Most important, though, was the propaganda effect on the occupied and Allied countries. The occupied people derived new hopes and new courage from the thought that now, finally, a definite and complete plan had been laid for their liberation: that time and scope of the final actions had been agreed upon. Those groups in Allied countries, especially in this country, who still did not believe in Russo-American cooperation, were brought to a long-lasting silence.

After Teheran, Roosevelt and Churchill had some far-reaching talks with Turkey's Inonu. From all appearances, the Turks compromised but did not yield completely to the major demands of the  Allies as yet. However, there may be involved a factor which resembles the action taken by Eisenhower at the time of Italy's surrender:

Part of the military decisions reached at Teheran and Moscow provided in all probability for a combined Allied attack on South-Eastern Europe from Asia Minor and Russia simultaneously. If so, Turkish entrance into the war would immediately open a bridge to Europe: the Sea of Marmara with its two narrow ends, the Dardanelles and the Bosporus.

Judging from the Italian example, one might suspect that some secret agreement has been made for Turkey to enter the war as soon as, but not before the time as come for an Allied invasion. The great advantage of such an agreement would be that the European part of Turkey will been little danger of being occupied by the Nazis before the Allied action. If Turkey would declare war on the Axis today, Nazis would be in Istanbul next week. If Turkey would wait until zero hour, the Allies will be able to prevent such a German move.

The reason for Turkey's pact of friendship and alleged solidarity with the Allies at the present might be to get the Turkish people prepared to accept the great news of war at a moment's notice.

Opa weighs in on the politics of the war discussions again. His sentence here, leaves room for improvement:

Those groups in Allied countries, especially in this country, who still did not believe in Russo-American cooperation, were brought to a long-lasting silence.

I mean, he wasn't completely wrong for the current events of the war. The US and Russia had managed to get along enough to jointly win the war. But the silence of the critics did not last very long. And I think even Opa knew that was a real possibility, but it sounds better to say "long-lasting" than "temporary."

I've been intrigued by the role of countries like Hungary, Turkey, and the like. The book I am reading right now: "Rescue Board" by Rebecca Erbelding (buy it!), tells the story of a government agency that works to rescue refugees of the war. Much of their work happens in these sort of neutral/leaning Allied places. As the Allies are gaining power by their inevitable victory, the neutral countries are more likely to fulfill requests. If a helpful cooperation will lead to some benefit after the war, then why not?

In Opa's article, he talks about the strategic need for Turkey to be on the Allied side, but only when they're ready for it. Turkey is strategic in their location, not only as sort of a place between Allied-occupied territory and Axis-occupied territory, but more about their waterways. The Sea of Marmara with the Dardanelles and Bosphorus strait are essentially the path between the Black Sea and the Aegean Sea (which ultimately leads into the Mediterranean Sea). So essentially, a ship in the Black Sea could pass through the Bosphorus strait near Istanbul, and ultimately find its way all the way to the Atlantic. Here's a map:

See the Black Sea up right? The little bubble is pointing to an area that has the Bosphorus strait- a nice little alleyway of water into the Sea of Marmara, which then spits out towards Greece by way of the Dardanelles. Then boom- you're out into open waters.

Opa's reasoning about Turkey waiting until the right strategic moment is smart. Turkey did ultimately declare war on the Axis powers in February of 1945, yeah, super late in the game. In fact, no Turkish troops ever saw battle. I don't think that the plan Opa had in mind ever came to light, or at least not in the way he imagined. I didn't do enough researching to learn the fine details of why the Turkish joined when they did. If you know- let us readers know in a comment!

The war drags on, and I keep getting the feeling that everyone expects it to end within a few months, six tops. That doesn't happen. Why? I'm sure Opa will tell us.