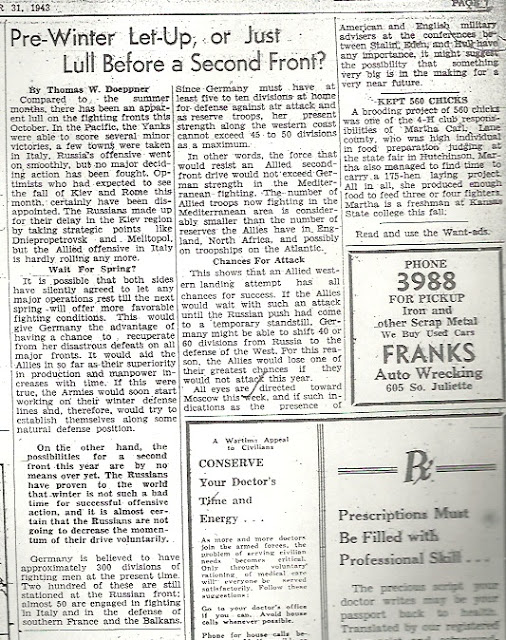 Pre-Winter Let-Up or Just Lull Before a Second Front?

Compared to the summer months, there has been an apparent lull on the fighting fronts this October. In the Pacific, the Yanks were able to score several minor victories, a few towns were taken in Italy. Russia's offensive went on smoothly, but no major deciding action has been fought. Optimists who had expected to see the fall of Kiev and Rome this month certainly have been disappointed. The Russians made up for their delay in the Kiev region by taking strategic points like Dniepropetrovsk and Melitopol, but the Allied offensive in Italy is hardly rolling any more.

It is possible that both sides have silently agreed to let any major operations rest till the next spring will offer more favorable fighting conditions. This would give Germany the advantage of having a chance to recuperate from her disastrous defeats on all major fronts. It would aid the Allies in so far as their superiority in production and manpower increases with time. If this were true, the Armies would soon start working on their winter defense lines and, therefore, would try to establish themselves along some natural defense position.

On the other hand, the possibilities for a second front this year are by no means over yet. The Russians have proven to the world that winter is not such a bad time for successful offensive action, and it is almost certain that the Russians are not going to decrease the momentum of their drive voluntarily.

Germany is believed to have approximately 300 divisions of fighting men at the present time. Two hundred of these are still stationed at the Russian front: almost 50 are engaged in fighting in Italy and in the defense of southern France and the Balkans. Since Germany must have at least five to ten divisions at home for defense against air attack and as reserve troops, her present strength along the western coast cannot exceed 45 to 50 divisions as a maximum.

This shows that an Allied western landing attempt has all chances for success. If the Allies would wait with such an attack until the Russian push had come to a temporary standstill, Germany might be able to shift 40 or 60 divisions from Russia to the defense of the West. For this reason, the Allies would lose one of their greatest chances if they would not attack this year.

All eyes are directed toward Moscow this week, and if such indications as the presence of American and English military advisors at the conferences between Stalin, Eden, and Hull have any importance, it might suggest the possibility that something very big is in the making for the very near future.

Opa writes about this "second front" - which I understand to mean the inevitable attack on Nazi forces on the European continent from the West. The whole idea Opa presents in this article, that most folks were probably waiting for, was this great squeeze of the Nazis- by the Russians from the East and the Americans and British from the West. (I don't mean to ignore all of the other nations who are involved in this war, just highlighting the major players in this scenario.)

After briefly brushing up on my WW2 battle history, I see that the political negotiations between Russia, England, and the US do not exactly result in a perfect version of this scenario, but ultimately Germany is quite squeezed.

Having two, even three fronts was a huge challenge for Germany in the war. However, when Opa was listing the number of divisions that Germans supposedly had- he left out a major pull on the German reserves. Remember, Germany was actually fighting two wars: one against the Allies, and the other against the Jews. Were Opa's numbers including the manpower necessary for deporting and murdering millions of people? I doubt it, and I wonder what the outcome of this war would have been if the Nazi war against Jews did not exist.

Opa gives credit to the Russians for their ability to continue offensively in the winter. He wonders if that combined with an opportunity for success in the West, might result in a faster ending of the war. At this point, I think the victors have been assumed, it was just a matter of when. Unfortunately for everyone, the war still has some time left on it.

In the timeline I glanced at, hardly anything happens between this date and D-day in June. January through June is noticeably empty. But Germany's second war was raging on.