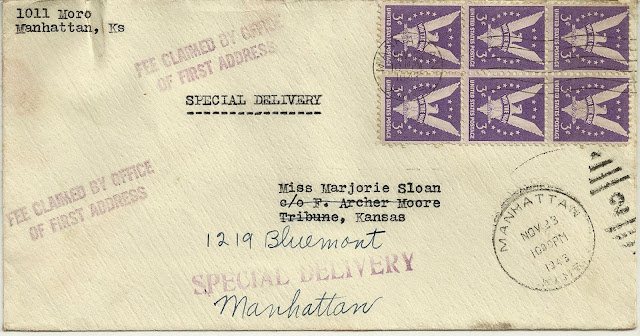 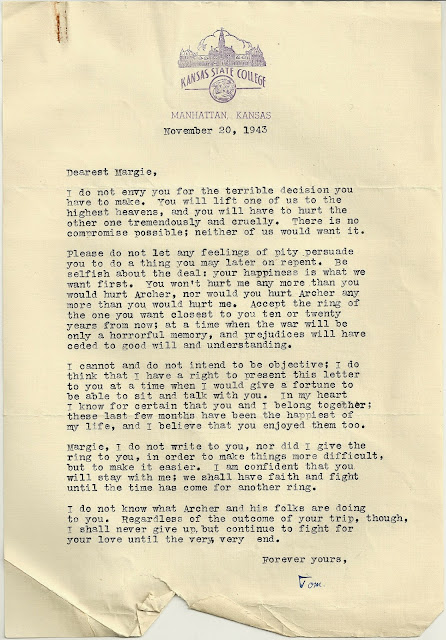 I do not envy you for the terrible decision you have to make. You will lift one of us to the highest heavens, and you will have to hurt the other one tremendously and cruelly. There is no compromise possible; neither of us would want it.

Please do not let any feelings of pity persuade you to do a thing you may later on repent. Be selfish about the deal; your happiness is what we want first. You won't hurt me any more than you would hurt Archer, nor would you hurt Archer any more than you would hurt me. Accept the ring of the one you want closest to you ten or twenty years from now; at a time when the war will be only a horrorful memory, and prejudices will have ceded to good will and understanding.

I cannot and do not intend to be objective; I do think that I have a right to present this letter to you at a time when I would give a fortune to be able to sit and talk with you. In my heart I know for certain that you and I belong together; these last few months have been the happiest of my life, and I believe that you enjoyed them too.

Margie, I do not know what Archer and his folks are doing to you. Regardless of the outcome of your trip, though, I shall never give up, but continue to fight for your love until the very, very end.

I attached the letter's envelope so you could see that Opa sent this letter TO ARCHER'S HOUSE! It seems to have gotten forwarded, and I love that it is a special delivery.

Opa has some serious chutzpah. And I LOVE it.

In reading this letter, I have so many different emotions! First, I'm kind of annoyed with Grandmother, what the heck is she doing? She's stringing two guys along, breaking one engagement only to pick up another, and then ponder going back to the original. For those of you just tuning in: Archer (or  Archie) was Grandmother's fiance, her boyfriend from the college she went to before she transferred to Kansas State. She broke it off with Archer when she met Opa, and then Opa popped the question and she said yes.

But here's the background that makes Grandmother seem a little less fickle. She broke up with Archer, after what appears to be a long term relationship. He was the safe "boy next door." Along came Opa, a debonair German boy who didn't even have solid citizenship. He was suave, handsome, and might be an enemy spy. He was worldly, unorthodox, and definitely not from a small town. Opa was a surprise for everyone, especially Grandmother. I think she was swept off her feet and once she had a minute to think outside the fumes of love- she realized just what she was getting into. Here was a man who may not even be allowed to stay in the US, and was (shhh) part Jewish. This was a scandal. Yeah he seems like a nice guy, but what happens when the novelty wears off? What happens if he has to go back to Europe? What would a future hold with a man like this? Do they really have as much in common as she thinks?

Meanwhile, if her own thoughts aren't giving her enough doubts, she has Archer begging for her to come back, and even his mother is slathering on the guilt (we know this because Grandmother told us about it and how awful she felt). On top of that, Grandmother's own family does not approve of this sweeping romance with a German. And what family would?!

But here's the kicker, one of the things that Grandmother said to us the night when she finally told us the story about Archer, was that she realized she couldn't marry someone because she felt sorry for them. I understood what she meant, but now that I have this letter in front of me, I wonder how instrumental it was in helping her make her decision.

All other arguments aside, Opa narrows it down to this: marry the one you want to be with in twenty years, be selfish in this, don't let "pity persuade you to do a thing you may later on repent." This argument shows me that Opa knows Grandmother well despite their short time together. Grandmother was always a woman of conscience, who was deeply concerned with being polite, kind, and not burdening anyone. She would harbor great heaps of guilt if she felt her decisions or actions hurt someone, or if she were a burden to someone. Her decision left her with no easy way out. Opa didn't let her off the hook- he told her that he would be just as hurt as Archie. She doesn't get to feel less guilty with either choice. So her choice must be what she wants.

Oh the drama!! Most of the time in real life- the wise choice is the boy next door. In this case, Opa makes a good argument for the "boy you are in love with." We all know what happens (because I'm calling her Grandmother)- but can you imagine making this choice?!

One more thing before I conclude, I realized that this relationship was a beautiful interruption and saving grace for Opa. I don't know if you've ever been in love or remember those first months of absolute intoxicating bliss that comes with those waves of love and emotions and falling vulnerably for someone. It's so fun and disorienting and consuming! And it is perfect for someone who has his entire family in Europe under Hitler's nose. I think that Love saved Opa in more ways than even I realized. This hurricane of love has given Opa the chance to be happy, to be cheerful, to feel free. I am not sure if he would be able to experience all those emotions without the strong influx of falling in love.

While my Grandmother seems fickle, and seems less aware of the struggle Opa endures as a refugee with family in danger, she has given him the gift of love, and in the end, she chose him. That's pretty beautiful.