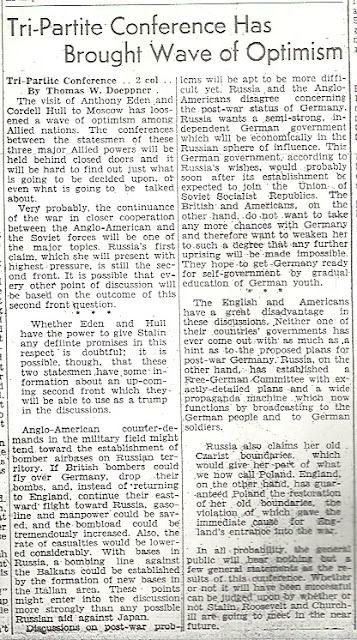 The visit of Anthony Eden and Cordell Hull to Moscow has loosened a wave of optimism among Allied nations. The conferences between the statesmen of these three major Allied powers will be held behind closed doors and it will be hard to find out just what is going to be decided upon, or even what is going to be talked about.

Very probably, the continuance of the war in closer cooperation between the Anglo-American and the Soviet forces will be one of the major topics. Russia's first claim, which she will present with highest pressure, is still the second front. It is possible that every other point of discussion will be based on the outcome of this second front question.

Whether Eden and Hull have the power to give Stalin any definite promises in this respect is doubtful; it is possible, though that these two statesmen have some information about an up-coming second front which they will be able to use as a trump in the discussions.

Anglo-American counter-demands in the military field might tend toward the establishment of bomber airbases on Russian territory. If British bombers could fly over Germany, drop their bombs, and instead of returning to England, continue their eastward flight toward Russia, gasoline and manpower could be saved, and the bomb load could be tremendously increased. Also, the rate of casualties would be lowered considerably. With bases in Russia, a bombing line against the Balkans could be established by the formation of new bases in the Italian area. These points might enter into the discussion more strongly than any possible Russian aid against Japan.

Discussions on post-war problems will be apt to be more difficult yet. Russia and the Anglo-Americans disagree concerning the post-war status of Germany. Russia wants a semi-strong, independent German government which will be economically in the Russian sphere of influence. This German government, according to Russia's wishes, would probably soon after its establishment be expected to join the Union of Soviet Socialist Republics. The British and Americans, on the other hand, do not want to take any more chances with Germany and therefore want to weaken her to such a degree that any further uprising will be made impossible. They hope to get Germany ready for self-government by gradual education of German youth.

The English and Americans have a great disadvantage in these discussions. Neither one of their countries' governments has ever come out with as much as a hint as to the proposed plans for post-war Germany. Russia, on the other hand, has established a Free-German Committee with exactly-detailed plans and a wide propaganda machine which now functions by broadcasting to the German people and to German soldiers.


Russia also claims her old Czarist boundaries, which would give her part of what we now call Poland. England, on the other hand, has guaranteed Poland the restoration of her old boundaries, the violation of which gave the immediate cause for England's entrance into the war.

In all probability, the general public will hear nothing but a few general statements as the results of this conference. Whether or not it will have been successful can be judged upon whether or not Stalin, Roosevelt, and Churchill are going to meet in the near future.

I have to pause briefly to both admire Opa's command on English, and notice the fun thing that happens when we find a phrase we like. For this article, Opa's favorite phrase is "on the other hand." It reminds me of when my Dad used to keep a tally of how many times the Baptist preacher would say "the bible says!" He got a kick out of it, and it kept him awake. I got a kick out of Opa's new phrase, and I know I do the same thing!

This meeting with Anthony Eden and Cordell Hull is symbolically important, as Opa writes. Anthony Eden was at the time functioning as the British Foreign Minster (he filled several roles throughout his time, even Prime Minister). Cordell Hull was the American Secretary of State (he served the longest term at 11 years). These two men were sort of a precursor, setting the stage for more official negotiations between Stalin, Roosevelt, and Churchill.

It seems that the meeting did go well enough, because the Big Three did meet after this smaller conference.

I am learning just how influential these government officials are, especially in regards to foreign relations. I am currently reading an excellent book by Rebecca Erbelding, titled Rescue Board (buy it now if you like well-researched books on this topic of Americans and the Holocaust). Erbelding writes about a little-known agency called the War Refugee Board, that evolved from the persistence of some government officials who saw that they were limited within their own agencies to do more for the European Jews. This agency was created in 1944, and as a result, the United States was able to do the work of rescuing Jews, even during the military conflict. It's a fascinating read. Part of what I'm learning through this book are the names of major players in the backdrop of government work, like Cordell Hull and Morgenthau, and others who we may loosely (or not at all) know about, but not fully understand their power to influence major action. The War Refugee Board was delayed in being created because of sheer pettiness on the part of some officials. Lives were likely lost because of it.

So as much as I sometimes think these diplomatic meetings and secretary of whatever folks are not doing anything, I could be very wrong. Who knows what foundation was set in this meeting that Opa is referring to, but we know that the tensions and differing opinions that Opa writes about were not completely solved. The Cold War is the manifestation of this disagreement.

I think it is interesting (but understandable) that the US and Great Britain would want a very weak Germany that they could ostensibly control and teach in the way they wanted the to go. I thought about what Opa must have felt when he was writing about that. Was he fully indoctrinated to the US' cause and process, or did he remember and think about the fact that a weak Germany gave rise to Fascism and Hitler? I imagine that he felt the latter, but as a German refugee in America, he couldn't be completely candid about his opinions on the matter. What would it have looked like for him to mention this historical consequence?

Granted, this new plan by the Anglo-Americans as Opa calls them, looked slightly less like a plan to humiliate, and more like a plan to tightly control the progress of the new German state. But I think that was the plan after the first world war too. When Opa writes that their plan would "weaken her to such a degree that any future uprising would be made impossible" - I wonder if he scoffed at that. He grew up in a beaten and weakened Germany that veritably guaranteed a future uprising.

Opa did allow himself to critique the Allies by saying that the Russians had an upper hand in discussing post-war Germany because they actually had a detailed plan that they had already begun communicating through propaganda to the German people and soldiers (how- I'm not sure). I wonder what the Germans wanted?

Ultimately, it is a sign of the Allied's confidence that they are already discussing post-war Germany and Europe and how they will re-organize the whole thing. What incredible responsibility lie on those who were part of these negotiations.