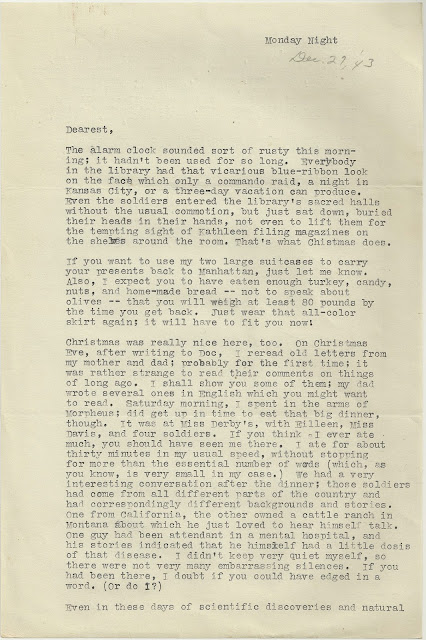 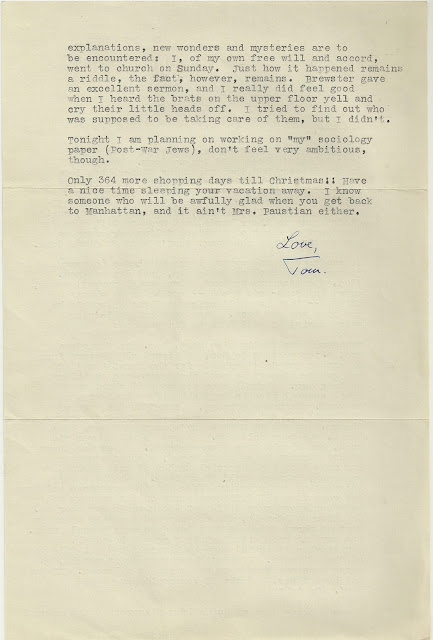 Letter from Opa to Grandmother
Transcription:

The alarm clock sounded sort of rusty this morning; it hadn't been used for so long. Everybody in the library had that vicarious blue-ribbon look on the face which only a commando raid, a night in Kansas City, or a three-day vacation can produce. Even the soldiers entered the library's sacred halls without the usual commotion, but just sat down, buried their heads in their hands, not even lift them for the tempting sight of Kathleen filing magazines on the shelves around the room. That's what Christmas does.

If you want to use my two large suitcases to carry your presents back to Manhattan, just let me know. Also, I expect you to have eaten enough turkey, candy, nuts, and home-made bread -- not to speak about olives -- that you will weigh at least 80 pounds by the time you get back. Just wear that all-color skirt again; it will have to fit you now!

Christmas was really nice here, too. On Christmas Eve, after writing to Doc, I reread old letters from my mother and dad; probably for the first time; it was rather strange to read their comments on things of long ago. I shall show you some of them; my dad wrote several ones in English which you might want to read. Saturday morn, I spent in the arms of Morpheus; did get up in time to eat that big dinner, though. It was at Miss Derby's, with Eileen, Miss Davis, and four soldiers. If you think I ever ate much, you should have seen me there. I ate for about thirty minutes in my usual speed, without stopping for more than the essential number of words (which, as you know, is very small in my case.) We had a very interesting conversation after the dinner; those soldiers had come from all different parts of the country and had correspondingly different backgrounds and stories. One from California, the other owned a cattle ranch in Montana about which he just loved to hear himself talk. One guy had been attendant in a mental hospital, and his stories indicated that he himself had a little doses of that disease. I didn't keep very quiet myself, so there were not very many embarrassing silences. If you had been there, I doubt if you could have edged in a word. (Or do I?)

Even in these days of scientific discoveries and natural explanations, new wonders and mysteries are to be encountered: I, of my own free will and accord, went to church on Sunday. Just how it happened remains a riddle, the fact, however, remains. Brewster gave an excellent sermon, and I really did feel good when I heard the brats on the upper floor yell and cry their little heads off. I tried to find out who was supposed to be taking care of them, but I didn't.

Tonight I am planning on working on "my" sociology paper (Post-War Jews), don't feel very ambitious, though.

Only 364 more shopping days till Christmas!! Have a nice time sleeping your vacation away. I know someone who will be awfully glad when you get back to Manhattan, and it ain't Mrs. Paustian either. 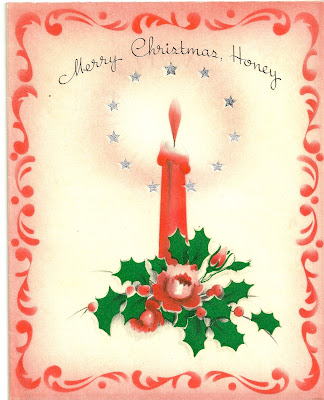 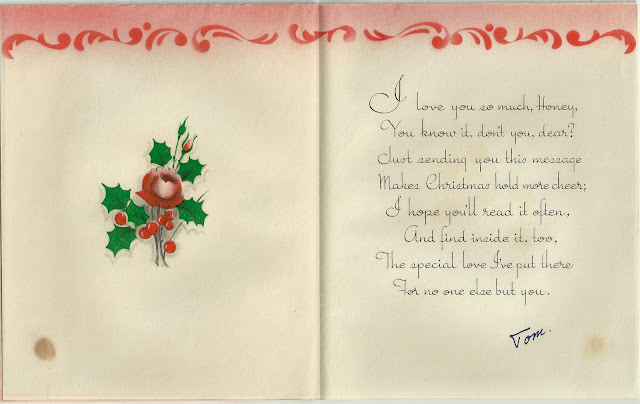 Christmas Card from Opa to Grandmother

(Inside card)
I love you so much Honey,
You know it, don't you, dear?
Just sending you this message
Makes Christmas hold more cheer;
I hope you'll read it often,
And find inside it, too,
The Special love I've put there
For no one else but you. 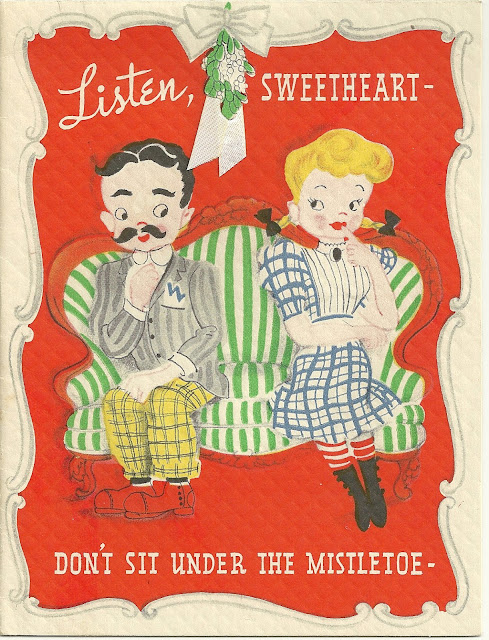 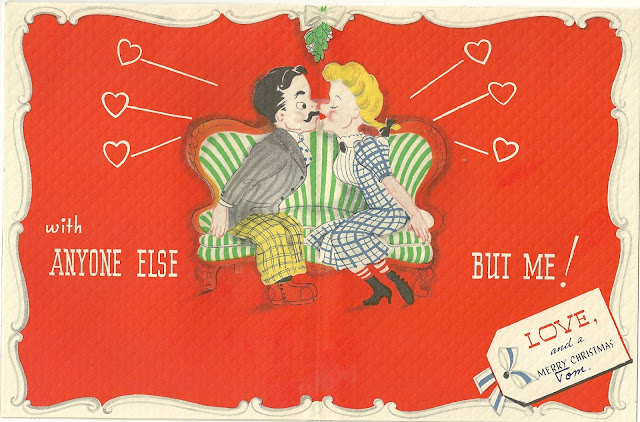 Another Christmas Card from Opa to Grandmother

(inside)
with anyone else but me!
Love, and a Merry Christmas   Tom.

I love Opa's sweet Christmas cards, and the fact that he sent two, ha. I'm sure he was sending them out of love, but also maybe to impress her parents a little bit (I don't think they loved him or the idea of him yet).

Opa spends Christmas on campus with some soldiers, a teacher, and a librarian (Eileen, who he kept in touch with)- all who have opened their hearts (and one, their home) to the lonely or at least those far from home. Opa's description of his Christmas dinner made me so happy. It's exactly what you would hope for him to have- a feast, good conversation, and a place to share his own stories.

Opa's style of writing in his letters feels so familiar to me, his personality shines through it in ways that my childhood self didn't quite have access to. I can understand his adult humor, I can see the events he describes and even witness his thoughts about them. Personal letters are better than a journal even. In a journal it is raw and perhaps most vulnerable, but in a letter we get to tell a story, add a little style, bring out our full personality.

Opa's comment about Grandmother eating all the things and being a ripe 80 pounds is actually hilarious if you know her. She may have actually reached 80 pounds after gaining her Christmas weight. Maybe that's an exaggeration but I don't think Grandmother ever weighed more than 90 pounds in my entire lifetime knowing her. She was a tiny woman. She said she only broke 100 once for a pregnancy, because the doctor was on her all the time about not gaining enough weight. I mean... I did NOT inherit her stature in any way.

Opa opens a small vault of vulnerability that is uncommon for his letters so far. He never really speaks very much about his parents, only that he heard from them. I wonder if this is partly because he chooses to have those conversations in person, or if his stoic German upbringing kicks in when things are a little close to the heart. In this letter he tells Grandmother that he spent Christmas Eve re-reading letters from his mother and dad. Before I get into his response, I want to give some context. In Germany, Christmas Eve was the big day to celebrate and open a gift. Although his mother was jewish, none of his family was particularly religious, so Opa's family celebrated Christmas like most Germans did, regardless of religion. I imagined Opa's Christmas Eve, he as by himself, likely thinking about home, his parents, and Christmas' past. He sank deeper into that reminiscence by reading old letters from his parents. Ella's letters to Opa from Christmas time were always filled with wishes that she could hold him near, celebrate with him and give him his gift in person. I imagine Opa thought even further back to a time when his whole family was under one roof: before his parent's divorce, before Hitler rose to power, before Patti left for France, before he left for the US. This was back when they lived in a big, nice apartment on Kurfurstendam, one of the fancy streets in Berlin. Back when things seemed normal.

Now Opa is reading the letters, that aren't even that long ago, and realizing just how much has changed since 1939. It's been five years since he's seen his mother, four since he'd seen his father, and I think about six years since he'd seen his sister. His entire family was now living in Nazi-occupied territory with bomb threats, deportation threats, and potential lack of access to the essentials for life. 1939 must have felt terrible at the time, but now his life was weirdly wonderful, and his family was shrouded in mysterious danger with very little power over it. How eerie it must have been to read those letters. Did he find consolation in them? He seemed to, because he wanted to share them with Grandmother. The letters written in English by his father were some she could read. It is clear that we don't have every letter written to Opa, and unclear exactly how the letters got separated or sorted out. But what is clear is that Opa kept many of them, and on a lonely Christmas Eve in 1943, he pulled them out to hear the voices of his parents, even if from the past.

I was struck by what he said next, that he spent Saturday morning (Christmas Day) in the arms of Morpheus. I might be reading too much into this little quip, but Morpheus is not the God of sleep, but the God of dreams. Dreams fill our nights when thoughts fill our days. I can't help but think Opa's day was filled with thoughts of his family, and the sharp homesickness that comes from spending yet another holiday away from them.
Posted by Sarah Snow at Wednesday, May 30, 2018