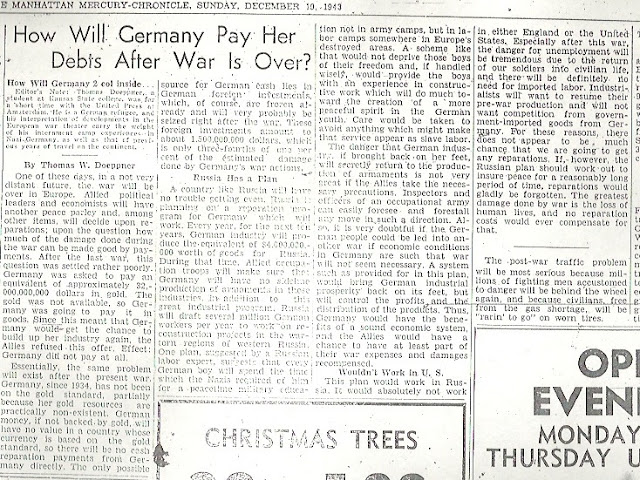 Article by Opa for the Manhattan, Kansas Newspaper: Mercury Chronicle

How Will Germany Pay Her Debts After War Is Over?

How Will Germany 2 col inside...
Editor's Note: Thomas Doeppner, a student at Kansas State College, was for a short time with the United Press at Amsterdam. He is a German refugee, and his interpretation of developments in the European war theatre carry the weight of his internment camp experiences in Nazi-Germany, as well as that of previous years of travel on the continent.

One of these days, in a not very distant future, the war will be over in Europe. Allied political leaders and economists will have another peace parley, and, among other items, will decide upon reparations; upon the question how much of the damage done during the war can be made good by payments. After the last war, this question was settled rather poorly. Germany was asked to pay an equivalent of approximately 32,000,000,000 dollars in gold. The gold was not available, so Germany was going to pay it in goods. Since this meant that Germany would get the chance to build up her industry again, the Allies refused this offer. Effect: Germany did not pay at all.

Essentially the same problem will exist after the present war. Germany, since 1934, has not been on the gold standard, partially because her gold resources are practically non-existent. German money, if not backed by gold, will have no value in a country who currency is based on the gold standard, so there will be no cash reparation payments from Germany directly. The only possible source for German cash lies in German foreign investments, which, of course, are frozen already and will very probably be seized right after the war. These foreign investments amount to about 1,500,000,000 dollars which is only three-fourths of one percent of the estimated damage done by Germany's war actions.

Russia Has a Plan

A country like Russia will have no trouble getting even. Russia is planning on a reparation program for Germany which will work. Every year, for the next ten years, German industry will produce the equivalent of $4,000,000,000 worth of goods for Russia. During that time, Allied occupation troops will make sure that Germany will have no sideline production of armaments in these industries. In addition to this great industrial program, Russia will draft several million German workers per year to work on reconstruction projects in the war-torn regions of western Russia. One plan, suggested by a Russian labor expert, suggests that every German boy will spend the time which the Nazis required of him for a peacetime military education not in army camps, but in labor camps somewhere in Europe's destroyed areas. A scheme like that would not deprive those boys of their freedom and, if handled wisely, would provide the boys with an experience in constructive work which will do much toward the creation of a more peaceful spirit in the German youth. Care would be taken to avoid anything which might make that service appear as slave labor.

The danger that German industries, if brought back on her feet, will secretly return to the production of armaments is not very great if the Allies take the necessary precautions. Inspectors and officers of an occupational army can easily foresee and forestall any move in such a direction. Also, it is very doubtful if the German people could be led into another war if economic conditions in Germany are such that war will not seem necessary. A system such as provided for in the plan, would bring German industrial prosperity back on its feet, but will control the profits and the distribution of the products. Thus, Germany would have a chance to have at least part of their war expenses and damages recompensed.

This plan would work in Russia. It would absolutely not work in either England or the United States. Especially after this war, the danger for unemployment will be tremendous due to the return of our soldiers into civilian life, and there will be definitely no need for imported labor. Industries will want to resume their pre-war production and will not want competition from government-imported goods from Germany. For these reasons, there does not appear to be much chance that we are going to get any reparations. If, however, the Russian plan should work out to ensure peace for a reasonably long period of time, reparations would gladly be forgotten. The greatest damage done by war is the loss of human lives, and no reparation costs would ever compensate for that.

This article is weird and frankly feels a little lazy for Opa, but I'll give him a break.

First, once again I have to address the super weird introduction, and maybe that played a role in my reading the article as weird. Opa's introduction includes information that we cannot confirm. The time he worked for the United Press: His father worked there, and Opa was likely in the offices while he was in Holland (perhaps fetching coffee), but the way this introduction is worded, you'd think he was a journalist. And then there is the line about Opa's time in a concentration camp, also completely without any confirmation. In the words of many politicians: I can neither confirm nor deny that this happened. But the story was never alluded to in any way other than one note in a college roommate's diary and the newspaper. Otherwise there were no letters, no documents, no legends that survived Opa's youth to bring this story to my feet. It's a mixed bag for me. Maybe he was interned for trying to cross the German border, but if so, it was temporary and without much consequence. We have a fairly well-documented timeline of Opa's where-abouts, and there aren't too many giant gaps. Last, and weird to me, is the comment that Opa has "previous years of travel on the continent." I mean, he lived in Germany, might have vacationed in Austria or some neighboring locations, but other than his travels out of Germany into Holland and to the United States, Opa was not a world-traveler. Not that I know of. I think the editor is sprinkling some hyperbole on Opa's description, and I doubt Opa had a huge amount of control over it.

Now let's move on to Opa's analysis of how Germany will pay reparations after the war. He significantly over-simplifies what happened after the first world war, which I suppose is forgivable since it can't be too many words for a newspaper. However, the simple fact is that Germany did owe reparations, and they did refuse in many different ways to pay them (partially because the amount was so astronomical that their ability to do it was severely limited). Opa was right, the Germans at this point in history really hadn't made any real effort to pay their reparations. However, the debt remained. Once Hitler came around, he decided to just annul the debt contract. His hope was that after a little world domination, it wouldn't matter. Plus, who doesn't love a guy who claims he can just tell the countries collecting to shove off? And yet, the debt still remains. Here is a fascinating article I read about the actual process and eventual payment of WW1 reparations. You really should go read it. If you don't: the super-short synopsis is that as of 2010, Germany finished paying the reparations (after several adjustments to money owed). It's kind of crazy. So Opa wasn't wrong at the time of writing, and his point stands, but I think you miss the idea that Germany is for the longest time indebted to the world, even if they don't act to make any payment. It wasn't just a wash.

Now, Opa talks about this magical plan that Russia has for reparations after basically saying that the US has no clue how to go about it. The way Opa writes about Russia and the implementation of their plan makes me wonder if Opa had any experience with Russians. I mean, it feels very naive for him to think that the Russian government, after losing millions of soldiers in a war, would just send German boys to peace-learning-industry camps. The whole thing is weird and feels like it is pulled from Russian propaganda. He talks about German workers going to do industry work in Russia, as if that is easy and everyone will go along with it. He brushes off any concern that Germany industries alive again will allow Germans to arm themselves. He basically says: we'll inspect that and make sure it doesn't happen (or at least the Russians will). I feel like they tried to do that after WW1?

The grand finale, which is why I feel this article is odd, is that Opa says the Russian plan will not work for the US or England- and then names very valid and compelling reasons that do not seem like they should be uniquely American or British issues. It left me wondering why Russia would be OK with an influx of migrant workers and competition from German industries. Wouldn't those also be problems for Russia?

I do agree with Opa's last statement, which perhaps should be at the forefront of any war/peace negotiation to remind us that what we do now could prevent war in the future, even if it might not fill our pockets:

The greatest damage done by war is the loss of human lives, and no reparation costs would ever compensate for that.

So we all know now that post-war Germany looked very different from any of these possibilities, but I have really enjoyed reading and thinking about all the possibilities.

Oh- as a little side note, I couldn't help but read the next part which is a paragraph from another article. It cracked me up so much I will transcribe it for you here for fun:

The post-war traffic problem will be most serious because millions of fighting men accustomed to danger will be behind the wheel again, and because civilians, free from the gas shortage, will be "rarin' to go" on worn tires.
Posted by Sarah Snow at Tuesday, May 29, 2018