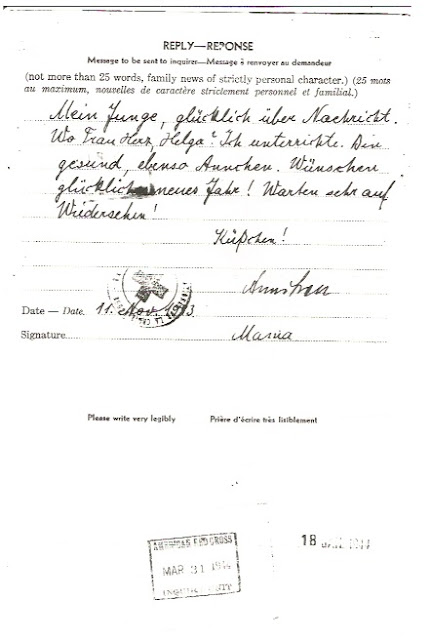 11 November 1943
My boy, happy for the news. Where are Frau Herz, Helga? I’m teaching. Am healthy, Annchen too. Wish you a happy new year! Waiting to see you again!
Kisses
Mama

Before I address the letter itself, I want to point out the postage time stamps. Ella wrote this response to Opa's Red Cross letter on November 11, 1943. There is a time stamp on the bottom right side that is dated 18 Jan 1944. I'm assuming that is the date at which the letter was sent from the Red Cross location in Germany to the United States. The stamp on the bottom left reads "American Red Cross MAR 31 1944" (I can't read the bottom part of the stamp). I assume that is the date at which the mail reached the shore of the United States or perhaps the Kansas post office. So Opa received his mother's red cross letter four months after it was written, I'm guessing at least 5 months after his original letter to her.
Ella is thrilled to hear from her boy, a luxury she does not take for granted. He is doing well in school, dating someone he plans to marry (I wonder if he told her?), and likely has given her the indication that he is on track to graduate. Opa's education has been an important focus for her, for even when she implored him to do what he could to help her, she always made sure it wasn't at the sacrifice of his schooling.
Ella no longer has a chance to join Opa in the United States as long as the war is still on. She is waiting to see him again with even more distance and unknown territory between her and the hoped future. Intelligent Germans like Ella must have an idea that Germany was losing the war, and hopes that its end was near.
Ella is still safe, healthy, and somehow teaching. I'm not sure how. Annchen is mentioned, which means she is still faithfully near to help and watch over Ella. Ella wishes a happy new year- a couple months away from the letter, but months late from its receipt.
Waiting to see you again. How hard was it for Opa to read that heartfelt optimism in a time that was so unsure? Maybe they both focused only on what good could come from the future. I don't know that I would have been able to do that. I would be tossing and turning at night with the rumors, the stories, the possibilities of never seeing my mother again.
Posted by Sarah Snow at Tuesday, May 08, 2018