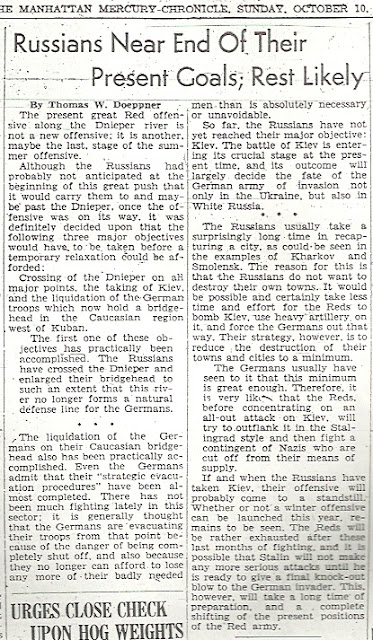 Article by Opa in the Mercury Chronicle

Russians Near End Of Their Present Goals; Rest Likely

The present great Red offensive along the Dnieper river is not a new offensive; it is another, maybe the last, stage of the summer offensive.

Although the Russians had probably not anticipated at the beginning of this great push that it would carry them to and maybe past the Dnieper, once the offensive was on its way, it was definitely decided upon that the following three major objectives would have to be taken before a temporary relaxation could be afforded:

Crossing of the Dnieper on all major points, the taking of Kiev, and the liquidation of the German troops which now hold a bridgehead in the Caucasian region west of Kuban.

The first one of these objectives has practically been accomplished. The Russians have crossed the Dnieper and enlarged their bridgehead to such an extent that this river no longer forms a natural defense line for the Germans.

The liquidation of the Germans on their Caucasian bridgehead also has been practically accomplished. Even the Germans admit that their "strategic evacuation procedures" have been almost completed. There has not been much fighting lately in this sector: it is generally thought that the Germans are evacuating their troops from that point because of the danger of being completely shut off, and also because they no longer can afford to lose any more of their badly needed men than is absolutely necessary or unavoidable.

So far, the Russians have not yet reached their major objective: Kiev. The battle of Kiev is entering its crucial stage at the present time, and its outcome will largely decide the fate of the German army of invasion not only in the Ukraine, but also in White Russia.

The Russians usually take a surprisingly long time in recapturing a city, as could be seen in the examples of Kharkov and Smolensk. The reason for this is that the Russians do not want to destroy their own towns. It would be possible and certainly takes less time and effort for the Reds to bomb Kiev, use heavy artillery on it, and force the Germans out that way. Their strategy, however, is to reduce the destruction of their towns and cities to a minimum.

The Germans usually have seen to it that this minimum is great enough. Therefore, it is very likely that the Reds, before concentrating on an all-out attack on Kiev, will try to outflank it in the Stalingrad style and then fight a contingent of Nazis who are cut off from their means of supply.

If and when the Russians have taken Kiev, their offensive will probably come to a standstill. Whether or not a winter offensive can be launched this year, remains to be seen. The Reds will be rather exhausted after these last months of fighting, and it is possible that Stalin will not make any more serious attacks until he is ready to give a final knock-out blow to the German invader. This, however, will take a long time of preparation, and a complete shifting of the present positions of the Red army.

I am again struck by the authority leant to Opa, only 23 years old. But then I am reminded that this 23 year old has seen a lot. Like some of the youth today that we see organizing protests and coordinating efforts to help promote social and legal change, Opa's generation rose to the occasion to do great things. He was rescued from Germany in many parts by the efforts of twenty-somethings. Opa's opinions and reporting on the war effort stands firm for the most part when I double-check through the history logs.

This article muses about the Russians and their efforts, and of course the eternal question of any nation at war: what does the current news mean for our future? Opa seems moderately optimistic, though the level of enthusiasm for Russian victory is a little dialed down (understandably). The Russians are the necessary evil for the Allied forces, and their victories have a double-edged sword.

I thought it was interesting when Opa talked about the Russians' care with keeping their cities in tact. I remember from my history classes (vaguely) the whole "slash and burn" tactic of the Russians, which painted them as willing to sacrifice anything for a victory. And perhaps that is a desperate effort. So the fact that they are still careful with their land means that they are not desperate but patient. Like any student of history knows: winter will always favor the Russians. They just have to bide their time.
Posted by Sarah Snow at Monday, April 30, 2018