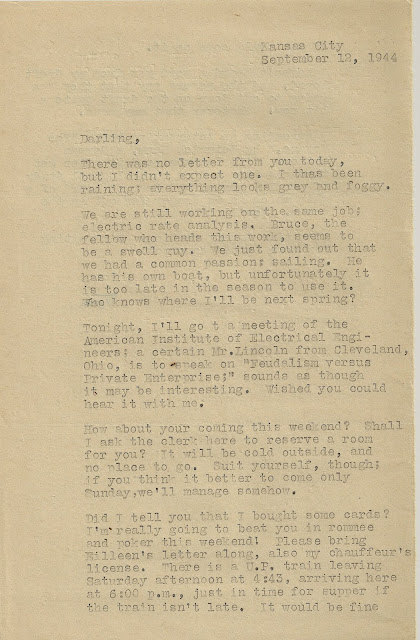 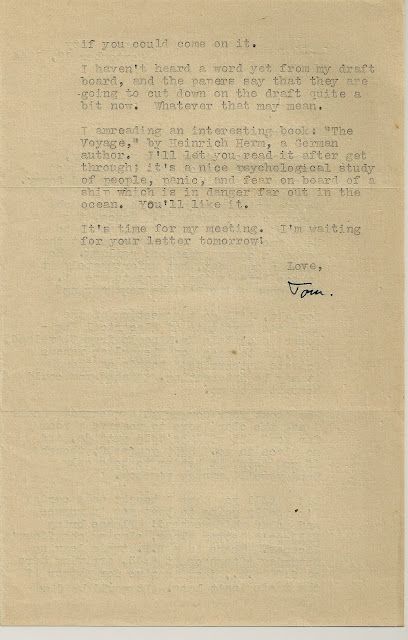 Letter from Opa to Grandmother, September 12, 1944.
Transcription:
Kansas City
September 12, 1944
Darling,
There was no letter from you today, but I didn't expect one. It has been raining; everything looks gray and foggy.
We are still working on the same job; electric rate analysis. Bruce, the fellow who heads this work, seems to be a swell guy. We just found out that we had a common passion: sailing. He has his own boat, but unfortunately it is too late in the season to use it. Who knows where I'll be next spring?
Tonight, I'll go to a meeting of the American Institute of Electrical Engineers; a certain Mr. Lincoln from Cleveland, Ohio, is to speak on "Feudalism versus Private Enterprise;" sounds as though it may be interesting. Wished you could hear it with me.
How about your coming this weekend? Shall I ask the clerk here to reserve a room for you? It will be cold outside, and no place to go. Suit yourself, though; if you think it better to come only Sunday, we'll manage somehow.
Did I tell you that I bought some cards? I'm really going to beat you in Romme and poker this weekend! Please bring Eilleen's letter along, also my chauffeur's license. There is a U.P. train leaving Saturday afternoon at 4:43, arriving here at 6:00p.m., just in time for supper if the train isn't late. It would be fine if you could come on it.
I haven't hear a word yet from my draft board, and the papers say that they are going to cut down on the draft quite a bit now. Whatever that may mean.
I am reading an interesting book: "The Voyage," by Heinrich Herm, a German author. I'll let you read it after get through; it's a nice psychological study of people, panic, and fear on board of a ship which is in danger far out in the ocean. You'll like it.
It's time for my meeting. I'm waiting for your letter tomorrow!
Love,
Tom.
I forget that Opa enjoyed sailing as a kid on the river in Berlin. I believe at one point his Dad owned a sail boat. I think it's weird that all the boats are already winterized and Opa talked about it being cold in the middle of September. I've been to Kansas, I don't think it's that cold yet?
Opa's meeting sounds interesting and a bit deep for an Engineering gathering. The group name sounded familiar so I did some research, and sure enough, this group merged with another in 1963 to make the IEEE (Institute of Electrical and Electronics Engineers). Opa was a long-time member of the IEEE, in fact he was the editor-in-chief of the newsletter, the SCANNER for many years.
I can't tell if Opa assumed he would be drafted or hoped for it. He is waiting to hear from them and mentions that the papers are saying that less people are being drafted. Does that mean that he doesn't think he'll be drafted? Or is he thinking it's inevitable, but just a matter of how long before they get to him? I'm not sure, I think this is the main reason for his general posture of "who knows where I'll be?"
When Opa described the book to Grandmother, I seriously wondered if he was being sarcastic. I really don't know. Maybe Grandmother liked psychological thrillers? If so- I am intrigued.
Posted by Sarah Snow at Wednesday, September 01, 2021