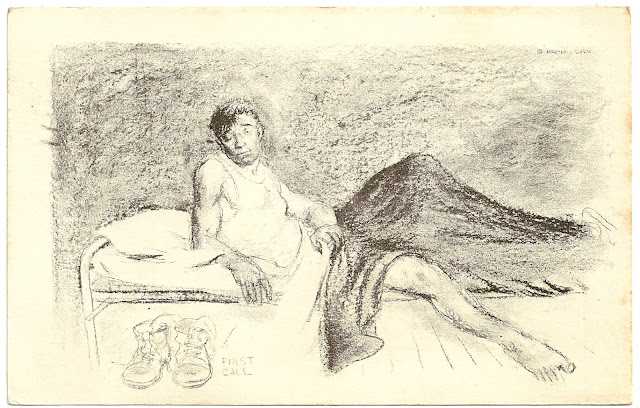 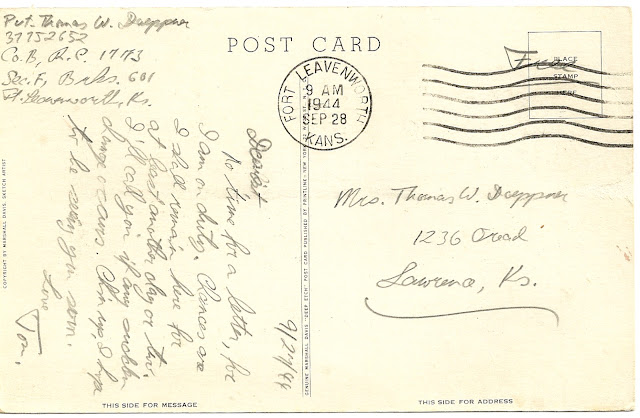 Postcard from Opa to Grandmother, September 27, 1944.
Transcription:
(Image: "First Call" by Marshall Davis, sketch of a disheveled man waking up, half out of bed, sleepy eyes.)
9/27/44
Dearest,
No time for a letter, for I am on duty. Chances are I shall remain here for at least another day or two. I'll call you if any sudden change occurs. Chin up, I hope to be seeing you soon.
Love, Tom 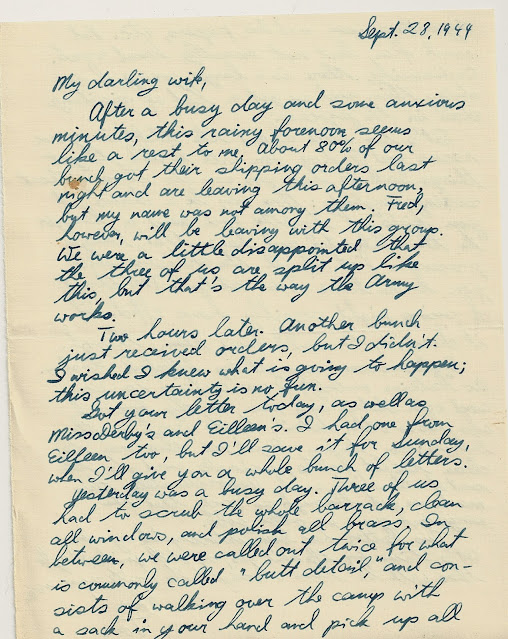 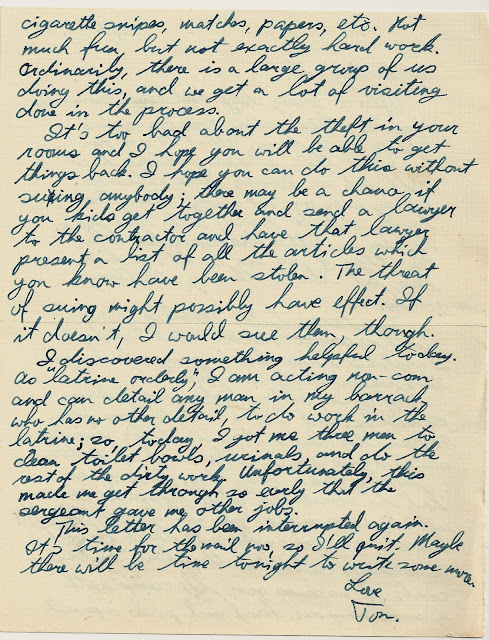 Letter from Opa to Grandmother, September 28, 1944.
Transcription:
Sept. 28, 1944
My darling wife,
After a busy day and some anxious minutes, this rainy forenoon seems like a rest to me. About 80% of our bunch for their shipping orders last night and are leaving this afternoon, but my name was not among them. Fred, however, will be leaving with this group. We were a little disappointed that the three of us are split up like this, but that's the way the Army works.
Two hours later. Another bunch just received orders, but I didn't. I wished I knew what is going to happen; this uncertainty is no fun.
Got your letter today, a well as Miss Derby's and Eilleen's. I had one from Eileen two, but I'll save it for Sunday, when I'll give you a whole bunch of letters.
Yesterday was a busy day. Three of us had to scrub the whole barrack, clean all windows, and polish all brass. In between, we were called out twice for what is commonly called "butt detail," and consists of walking over the camp with a sack in your hand and pick up all cigarette snipes, matches, papers, etc. Not much fun, but not exactly hard work. Ordinarily, there is a large group of us doing this, and we get a lot of visiting done in the process.
It's too bad about the theft in your rooms and I hope you will be able to get things back. I hope you can do this without suing anybody; there may be a chance if you kids get together and send a lawyer to the contractor and have that lawyer present a list of all the articles which you know have been stolen. The threat of suing might possibly have effect. If it doesn't, I would sue then, though.
I discovered something helpful today. As "latrine orderly," I am acting non-com and can detail any man in my barrack who has no other detail, to do work in the latrine; so, today, I got me three men to clean toilet bowls, urinals, and do the rest of the dirty work. Unfortunately, this made me get through so early that the sergeant gave me other jobs.
This letter has been interrupted again. It's time for the mail now, so I'll quit. Maybe there will be time tonight to write some more.
Love,
Tom. 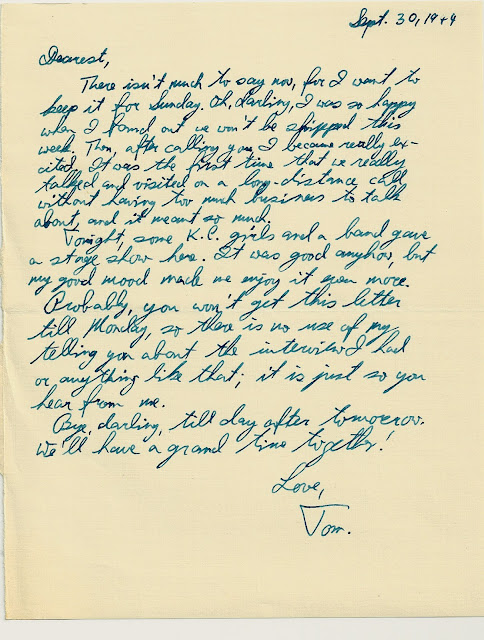 Letter from Opa to Grandmother, September 30, 1944.
Transcription:
Sept. 30, 1944
Dearest,
There isn't much to say now, for I want to keep it for Sunday. Oh, darling, I was so happy when I found out we won't be shipped this week. Then, after calling you, I became really excited. It was the first time that we really talked and visited on a long-distance call without having too much business to talk about, and it meant so much.
Tonight, some K.C. girls and a band gave a stage show here. It was good anyhow, but my good mood made me enjoy it even more.
Probably, you won't get this letter till Monday, so there is no use of my telling you about the interview I had or anything like that; it is just so you hear it from me.
Bye, darling, till day after tomorrow. We'll have a grand time together!
Love,
Tom.
The message of all these letters is simple: Opa misses Grandmother. He is SO thrilled to finally get to see her, and all the uncertainty of folks getting shipped out is now a distant memory.
Opa's encouragement for Grandmother to keep her "chin up" in the first postcard tells me that Grandmother has ben expressing a similar feeling of missing Opa. This separation must have been so hard for them. At first the novelty of marriage and joining the Army was enough to keep them occupied. But now that all the business and novelty has worn off, it's officially sad to not be together.
Opa is still navigating Army life, learning tricks that aren't so tricky after all (delegating and then getting more jobs). Grandmother's room was robbed, it seems by some fault of a contracting company. Opa seems quick to litigation, I wonder if this was more common (or simple) then, or if that was just him. Now we talk about how we live in such a litigious society, but honestly, as far as my experience, few people actually follow through because legal fees and courts are so expensive and time consuming. It's like insurance: there's a hidden deductible in our minds of how much is worth trying to win back.
I hope Opa and Grandmother have a lovely weekend together, and that we get to hear a little bit about it in the next letter. We'll see!
Posted by Sarah Snow at Saturday, September 25, 2021