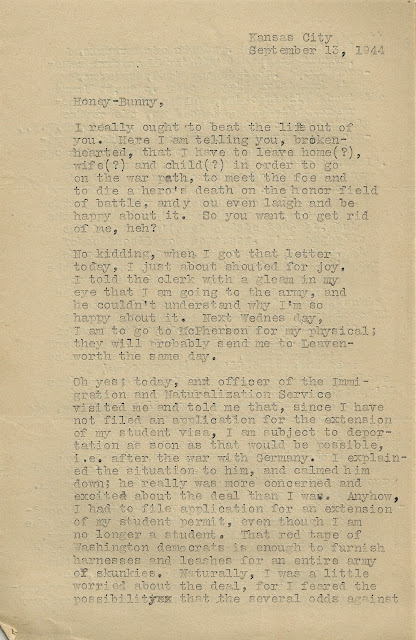 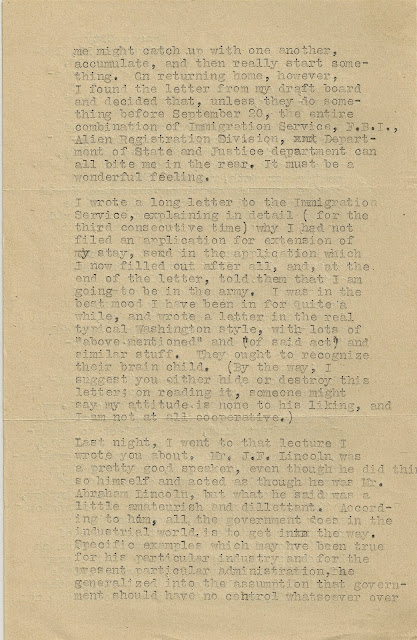 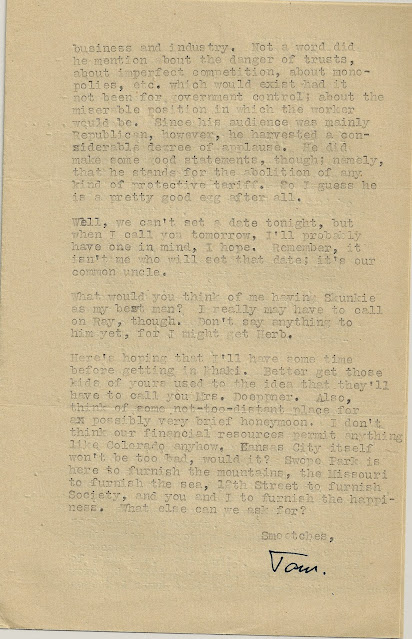 Letter from Opa to Grandmother, September 13, 1944.
Transcription:
Kansas City
September 13, 1944
Honey-Bunny,
I really ought to beat the life out of you. Here I am telling you, broken-hearted, that I have to leave home(?), wife(?), and child(?) in order to go on the war path, to meet the foe and to die a hero's death on the honor field of battle, and you even laugh and be happy about it. So you want to get rid of me, heh?
No kidding, when I got that letter today, I just about shouted for joy. I told the clerk with a gleam in my eye that I am going to the army and he couldn't understand why I'm so happy about it. Next Wednesday, I am to go to McPherson for my physical; they will probably send me to Leavenworth the same day.
Oh yes; today an officer of the Immigration and Naturalization Service visited and told me that, since I have not filed an application for the extension of my student visa, I am subject to deportation as soon as that would be possible, i.e. after the war with Germany. I explained the situation to him, and calmed him down; he really was more concerned and excited about the deal than I was. Anyhow, I had to file application for my student permit, even though I am no longer a student. That red tape of Washington democrats is enough to furnish harnesses and leashes for an entire army of skunkies. Naturally, I was a little worried about the deal, for I feared the possibility that the several odds against me might catch up with one another, accumulate, and then really start something. On returning home, however I found the letter from my draft board and decided that, unless they do something before September 20, the entire combination of Immigration Service, F.B.I., Alien Registration Division, Department of State and Justice department can all bite me in the rear. It must be a wonderful feeling.
I wrote a long letter to the Immigration Service, explaining in detail (for the third consecutive time) why I had not filed an application for extension of my stay, send in the application which I now filled out after all, and, at the end of the letter, told them I am going to be in the army. I was in the best mood I have been in for quite a while, and wrote a letter in the real typical Washington style, with lots of "above mentioned" and "of said act" and similar stuff. They ought to recognize their brain child. (By the way, I suggest you either hide or destroy this letter; on reading it, someone might say my attitude is none to his liking, and I am not at all cooperative.)
Last night, I went to that lecture I wrote you about. Mr. J.F. Lincoln was a pretty good speaker, even though he did think so himself and acted as though he was Mr. Abraham Lincoln, but what he said was a little amateurish and dillettant. According to him, all the government does in the industrial world is to get in the way. Specific examples which may have been true for his particular industry and for the present particular administration, he generalized into the assumption that government should have no control whatsoever over business and industry. Not a word did he mention about the danger of trusts, about imperfect competition, about monopolies, etc. which would exist had it not been for government control; about the miserable position in which the worker would be. Since his audience was mainly Republican, however, he harvested a considerable degree of applause. He did make some good statements though; namely, that he stands for the abolition of any kind of protective tariff. So I guess he is a pretty good egg after all.
Well, we can't set a date tonight, but when I call you tomorrow, I'll probably have one in mind, I hope. Remember, it isn't me who will set that date; it's our common uncle.
What would you think of me having Skunkie as my best man? I really may have to call on Ray, though. Don't say anything to him yet, for I might get Herb.
Here's hoping that I'll have some time before getting in khaki. Better get those kids of yours used to the idea that they'll have to call you Mrs. Doeppner. Also, think of some not-too-distant place for a possibly very brief honeymoon. I don't think our financial resources permit anything like Colorado anyhow. Kansas City itself won't be too bad, would it? Swope Park is here to furnish the mountains, the Missouri to furnish the sea, 12th Street to furnish Society, and you and I to furnish the happiness. What else can we ask for?
Smootches,
Tom. 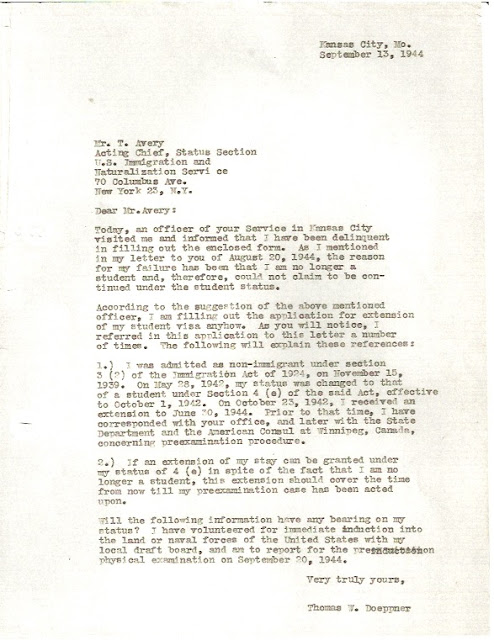 Letter from Opa to IRS rep Mr. Avery, September 13, 1944.
Transcription:
Kansas City, Mo.
September 13, 1944
Mr. T. Avery
Acting Chief, Status Section
U.S. Immigration and
Naturalization Service
70 Columbus Ave.
New York 23, N.Y.
Dear Mr. Avery:
Today, an officer of your Service in Kansas City visited me and informed that I have been delinquent in filling out the enclosed form. As I mentioned in my letter to you of August 20, 1944, the reason for my failure has been that I am no longer a student and, therefore, could not claim to be continued under the student status.
According to the suggestion of the above mentioned officer, I am filling out the application for extension of my student visa anyhow. As you will notice, I referred in this application to this letter a number of times. The following will explain these references:
1.) I was admitted as a non-immigrant under section 3(2) of the Immigration Act of 1924, on November 15, 1939. On May 28, 1942, my status was changed to that of a student under section 4(e) of the said Act, effective to October 1, 1942. On October 23, 1942, I received an extension to June 30, 1944. Prior to that time, I have corresponded with your office, and later with the State Department and the American Consul at Winnipeg, Canada, concerning preexamination procedure.
2.) If an extension of my stay can be granted under my status of 4(e) in spite of the fact that I am no longer a student, this extension should cover the time from now till my preexamination case has been acted upon.
Will the following information have any bearing on my status? I have volunteered for immediate induction into the land or naval forces of the United States with my local draft board, and am to report for the preinduction physical examination on September 20, 1944.
Very truly yours,
Thomas W. Doeppner
Opa joins the Army! He finally found the solution to most of his problems, and since he tried pretty much all of the other ones, this was his Hail Mary toss. He signed up for the draft in order to solidify a path to citizenship that wasn't fraught with detours and red tape and false accusations.
In his autobiography, they way he remembered (or told it) was this:

I really wanted to get into the Army "to fight the Nazis." As an "enemy alien," however, I was not eligible to enlist. Someone suggested I could volunteer for the draft (probably thinking, if you are stupid enough). Also, Marjorie and I were engaged to be married.
I called the draft board, and, sure enough, I was allowed to volunteer, which I did right then. The military must have been desperate, because they ordered me to active duty at Fort Leavenworth, KS, within 10 days. (pg 30)

So... that's not exactly how it went, now is it? But I will give Opa the benefit of the doubt. First, he wrote his autobiography in 1996, about fifty years later. Second, he had just been diagnosed with dementia and had Grandmother helping him remember details. Third, I can understand why Grandmother and Opa both would be tempted to leave these peeping tom details out, even if they both remembered (which I think they did).
The Army has its own adventure in store for Opa, but at least he can be sure that he has a future in the US, he has a paycheck, and he and Grandmother can now get married (now that they know what the next 6 months of life look like).
The draft board notice came just in time as Opa was on the edge of the bureaucratic cliff with the INS. I love how Opa gleefully wrote them for the third time with all his Washington language, and then stuck the landing with "oh by the way- I joined the army suckers!"
At the time joining military service provided an expedited process to citizenship (not forced, but accessible). Opa signed up for that.
So now it's time to plan a wedding. Grandmother and Opa had agreed that they would get married if Opa were called up, so in a way Grandmother was like a war bride, but it's a little different in this context. I don't think either of them expected Opa would see combat, as the war appeared to be winding down at least in terms of sending mass transports of troops overseas. Already the rumors of a slow down in draft had been going around.
Opa finds out on September 13 that he is to join the Army and report for his physical on September 20. That's one week away!
I alluded earlier when Opa had his peeping Tom incident that it would change the trajectory of his entire life.
Now it's played out: he got falsely accused of a crime, lost his reputation and job as result, found a new job but held a tenuous position as a visitor in the US, signed up for the draft as a last ditch effort to secure citizenship and give a solid foundation for his relationship with Grandmother. Grandmother had been pushing off the wedding for some time, though their relationship seemed to improve and become more solid after Opa gave her an out and she stuck around.
Now he's been drafted and within the week, my Grandparents will be married.
All because of that one random lady and the landlord who didn't like the looks of Opa.
Posted by Sarah Snow at Friday, September 03, 2021