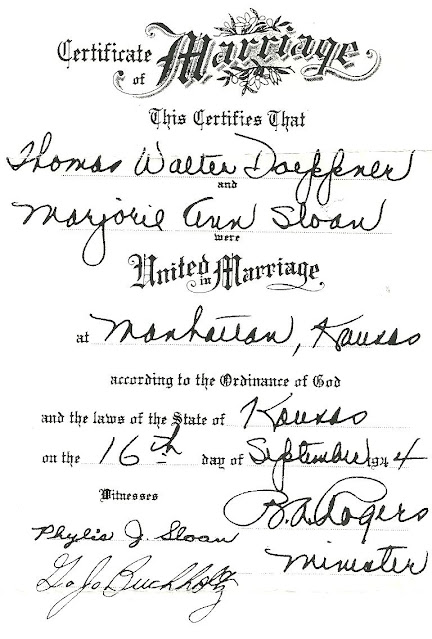 Marriage Certificate for Grandmother and Opa, September 16, 1944.
Transcription:
Certificate of Marriage
This Certifies That
Thomas Walter Doeppner
and
Marjorie Ann Sloan
were
United in Marriage
at Manhattan, Kansas
according to the Ordinance of God
and the laws of the State of Kansas
on the 16th day of September 1944
Witnesses
Phylis J. Sloan
Gayle Buckholz
B.A. Rogers  Minister

Wedding Announcement in Mercury Chronicle Newspaper, September 17, 1944.
Transcription:
K.S.C. Graduates Married in Temple
At 4 o'clock Saturday afternoon, September 16 in the Methodist Memorial Temple, Mss Marjorie Ann Sloan, daughter of Mr. and Mrs. W.J. Sloan of Selden, and Thomas Walter Doeppner, son of Mr. and Mrs. August Doeppner of Amsterdam, Holland, exchanged vows of marriage. The Rev. B.A. Rogers read the double ring service which was preceded by Beethoven's "Moonlight Sonata" played by Miss Elna Hanson. While candles at the altar were lighted by the bride's niece, Miss Betty Sloan of Topeka in a pink dress, Miss Hanson payed "To the Evening Star" from Tannhauser. Mrs. Irene Wagar, soloist sang "Ah Sweet Mystery of Life" and "Because." Miss Hanson during the ceremony played Schubert's Serenade and the traditional wedding marches.
The attractive bride wore a street length dress of marine blue wool jersey, featuring a side draped skirt. Her accessories were brown. She wore a necklace of pearls and her corsage was of gardenias and pink roses.
As maid of honor, another niece of the bride, Miss Phyllis Sloan, wore a yellow dress.
The altar was banked with palms and a large basket with a fall bouquet of varicolored aster occupied each side. A Kappa Phi mystic candle burned on the mantle.
Following the ceremony Mr and Mrs. Doeppner received the guests in the Temple parlor where they cut the two tier wedding cake on which were a miniature bride and groom. Mrs. Nora Meister, Miss Eilleen Roberts and Miss Doris Paustian served cake and punch.
Following a brief honeymoon, Mr. Doeppner will report Wednesday to Fort Leavenworth for induction into the armed services. Both the bride and groom received their degrees from Kansas State last spring. The bride who has a degree in home economics and child welfare has a graduate assistantship in Child welfare at Kansas University. She will return to her work there. Mr. and Mrs. W.G. Shelly and Hubert of McPherson were out of town guests at the wedding.
-Manhattan Mercury- Chronicle
Sunday, September 17, 1944.
They got married!!!
This wedding was anything but typical. If you look at the guest list (we have a copy) and the mention of the out of town guests in the article, who is missing? Grandmother's parents.
My Grandmother was private and keen on not stirring up drama, but she told us that her parents were not at the wedding because they did not approve of Opa. She would always follow that up with "but they sure loved him later!" I got the impression that it didn't take him long to win them over but we'll see if that shows up in the letters.
Grandmother's folks didn't show up to their daughter's wedding  That's pretty severe! I fact, only two of Grandmothers relatives showed up from what we can tell: the two nieces mentioned in the article. That probably took a lot of courage from Grandmother to go through with it.
It was a quick wedding, and not traditional in dress either. Grandmother wore a blue skirt suit with pearls. And a corsage with gardenias and roses. No white dress or veil. We have a picture... (look how cute and young they are!) 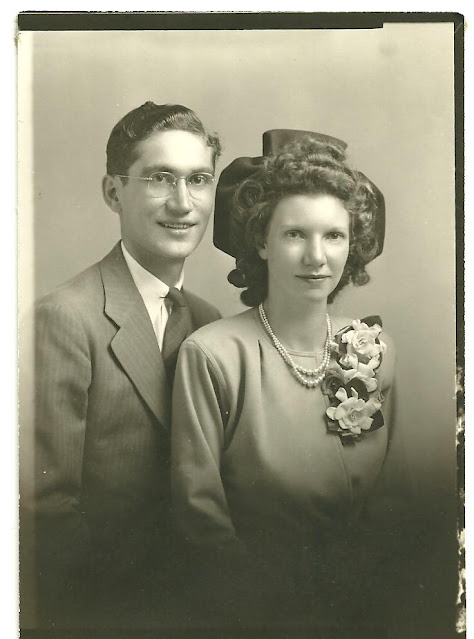 Grandmother and Opa Wedding Picture, September 16th, 1944.
Some close friends were there, and some missing (even Winton couldn't come). The reception was simple, and the honeymoon in Kansas City was simple and short, but I have a feeling that Grandmother and Opa were pretty happy. They were married. Opa had a future. Grandmother could continue to do her work in the college. Everything was working out!
It was a good day.
I wonder how many people bet against them. Losing bets, all of them.
Posted by Sarah Snow at Monday, September 06, 2021