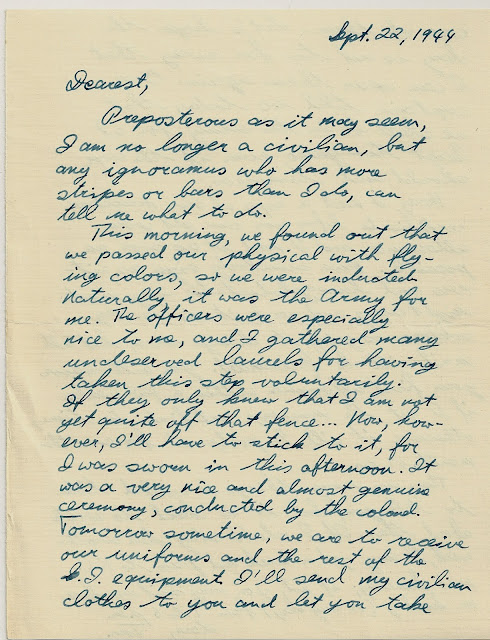 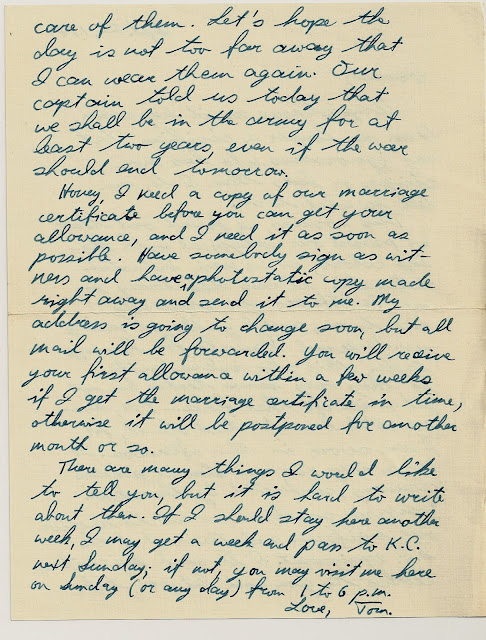 Letter from Opa to Grandmother, September 22, 1944.
Transcription:
Sept. 22, 1944
Dearest,
Preposterous as it may seem, I am no longer a civilian, but any ignoramus who has more stripes or bars than I do, can tell me what to do.
This morning, we found out that we passed our physical with flying colors, so we were inducted. Naturally, it was the Army for me. The officers were especially nice to me, and I gathered many undeserved laurels for having taken this step voluntarily.
If they only knew that I am not yet quite off that fence... Now, however, I'll have to stick to it, for I was sworn in this afternoon. It was a very nice and almost genuine ceremony, conducted by the colonel.
Tomorrow sometime, we are to receive our uniforms and the rest of the G.I. equipment. I'll send my civilian clothes to you and let you take care of them. Let's hope the day is not too far away that I can wear them again. Our captain told us today that we shall be in the army for at least two years, even if the war should end tomorrow.
Honey, I need a copy of our marriage certificate before you can get your allowance, and I need it as soon as possible. Have somebody sign as witness and have a photostatic copy made right away and send it to me. My address is going to change soon, but all mail will be forwarded. You will receive your first allowance within a few weeks if I get the marriage certificate in time, otherwise it will be postponed for another month or so.
There are many things I would like to tell you, but it is hard to write about them. If I should stay here another week, I may get a weekend pass to K.C. next Sunday; if not, you may visit me here on Sunday (or any day) from 1 to 6pm.
Love,
Tom.
Opa announces his induction into the US Army with a bit of a shoulder shrug in this letter. He admires the ceremony, and I understood what he meant about it being "nice and almost genuine." There's a lot of ritual and pomp and circumstance with the military  Many times you can't help but be moved, and yet in the back of my head I know that part of the theatrics of it all is a for the morale and keeping folks in line with the mission. It's an interesting line to straddle. I love ritual, but I have a healthy skepticism for the motives behind emotionally manipulative rituals.
It's helpful for me to see that Opa really wasn't all-in at this point, with his pacifist background still a recent feeling. He is happy for the opportunity and stability that the Army will offer him, but he hasn't been won over... yet.
When Opa wrote his autobiography, and when he spoke with us, we were under the impression that the Army was a natural procession in his plan. We never knew that he avoided it until it was his only option. I've wondered throughout this project when his opinion shifted. He's not quite off the fence yet, as he points out.
So now, Opa's officially in the Army for at least two years, a commitment he is willing to uphold (though he seems to be eager to skip to the end). He gives Grandmother some instructions in order to get the most out of his service: the dependent allowance. This was a war-time benefit for the families of military individuals and Opa was eager to begin providing for Grandmother. I thought it was funny that their marriage certificate didn't have a witness signature yet.
Opa misses Grandmother, and he has things he wants to tell her and share with her. Now that he's in the Army, his time is not his own and even his thoughts are not particularly welcomed. He is anxious to have some alone time with her. I wonder what he's thinking about. There is a lot to process.
Posted by Sarah Snow at Monday, September 13, 2021