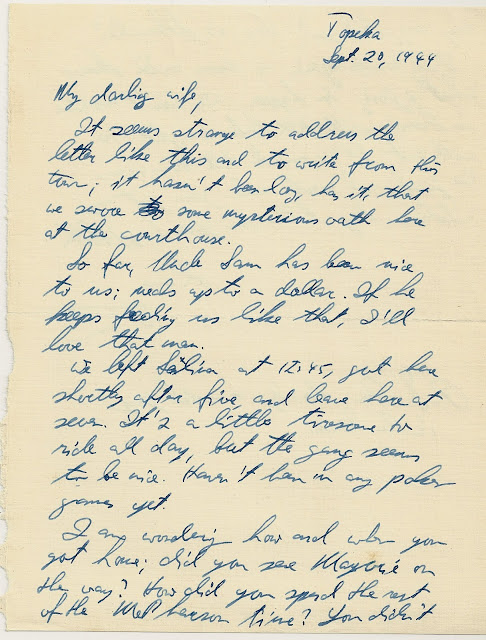 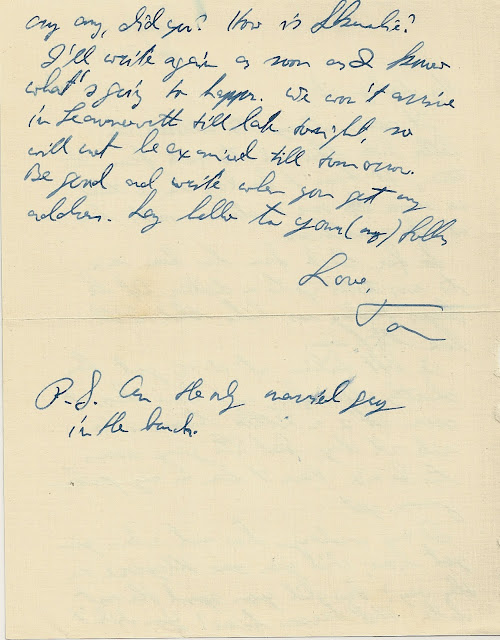 Letter from Opa to Grandmother, September 20, 1944.
Transcription:
Topeka
September 20, 1944
My darling wife,
It seems strange to address the letter like this and to write from this town; it hasn't been long, has it, that we swore some mysterious oath here at the courthouse.
So far, Uncle Sam has been nice to us; meals up to a dollar. If he keeps feeding us like that, I'll love that man.
We left Salina at 12:45, got here shortly after five, and leave here at seven. It's a little tiresome to ride all day, but the gang seems to be nice. Haven't been any poker games yet.
I am wondering how and when you got home; did you see Marjorie on the way? How did you spend the rest of the McPherson time? You didn't cry any, did you? How is Skunkie?
I'll write again as soon as I know what's going to happen. We won't arrive in Leavenworth till late tonight, so will not be examined till tomorrow.
Be good and write when you get my address. Say hello to your (my) folks.
Love,
Tom
P.S. I'm the only married guy in the bunch.
Opa clearly jotted this down quickly to mail before hopping on the next train to Ft. Leavenworth, and the beginning of the next phase of his life.
He's getting used to calling Grandmother wife, as most married couples giggle and marvel over in the beginning of their marriages.
I remember feeling so weird and old when I would mention or introduce Jason as my husband. It felt like we were playing grown-up. Perhaps because that was how we played grown up as children, mimicking our parents and the families around us. I don't think getting married is the pathway to adulthood, but it is one of many rituals of growing up.
Opa is on his way to the Army, with a new boss: "Uncle Sam." He's facing his own realities of growing up. He's in the army, a fate he had never imagined for himself. He's in the US with an engineering degree, and most happily and surprisingly of all, he is married.
Opa is still marveling at this "mysterious oath" that makes him joyfully bound to Grandmother. Soon he will make another oath that will bind him to his new country, the USA.
Posted by Sarah Snow at Wednesday, September 08, 2021