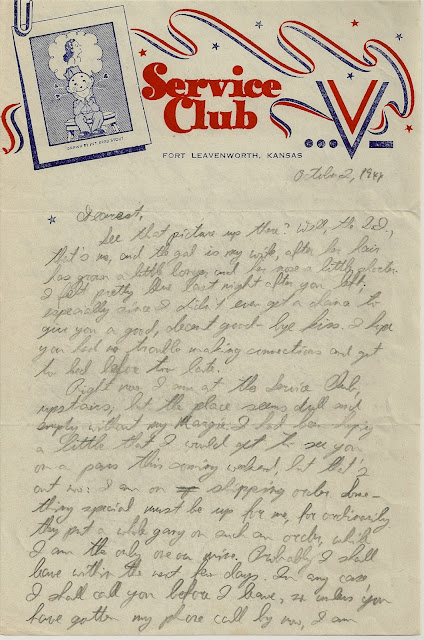 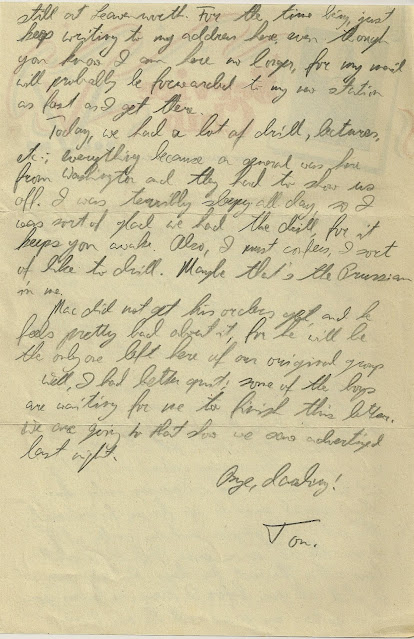 Letter from Opa to Grandmother, October 2, 1944.
Transcription:
October 4, 1944
Dearest,
After seeing you last night, it is much easier to leave; also, the fact that I know at least approximately were I am going and what I am to do, simplifies matters considerably. After you left last night, I went right back to camp and to bed. The sounded taps, turned the lights on, and made us get up for breakfast. There just didn't seem to be any interval of time between taps and breakfast, except that someone must have turned the clock from eleven to five. I feel rested today, though, and was all up and ready for butt detail. (Found two matches today; that's a great improvement!)
The rest of the morning I spent waiting for the mail, for I knew your letter was in it. I appreciated that you spelled out the word "barracks" on the envelope. Your new spelling of it (with an "r" in the second syllable) looks very nice, in fact it adds to the appearance of the word and uses the alphabet more evenly. Why don't you write to Webster about it and have the dictionary altered to conform with your new theories?
Mac and Don got their shipping orders too, both are leaving tonight, i.e. before I do, so I will be the last of the Mohicans.
I hope you got that train last night; my guess is that you even had to wait before it left, but maybe not. Anyhow, it was nice to have had that extra hour together. Did you get many mosquito bites? Of all the parts of my body that were exposed, only my right hand rated a bite; if I had been a mosquito, I certainly would not have missed a chance like that. How is your cold? If you catch something like pneumonia or suchlike, I should never forgive myself.
Mac just came in, beaming all over his round face. He will leave this afternoon at 3:30. Also, he got a package of fudge, so now we are all filling and overfilling our after-dinner stomachs with sweets. By the way, both Mac and Don say they liked you very much. Yeah, I'm awfully proud of my wife. I hope I can show her off a little more frequently before long.
The next letter will be from Camp X. (You aren't supposed to know that X marks the spot Crowder.)
Love,
Tom.
Opa is buoyed by a weekend with Grandmother and some certainty in his Army life. He is shipping out to Camp Crowder very soon; his group of friends all separated out.
Opa has a sense of purpose, renewed by his time with Grandmother and fostered by his camaraderie with his recently-made friends. Any friend that shares fudge is a winner in my eyes.
Opa's heading for Camp Crowder, Missouri, which is still not too far from Grandmother (though it is further). Life is happening, and Opa is ready for it.
What's in store for Opa? I'm guessing basic training (boot camp). Something tell me he's gonna do great, because if there's one thing I've learned about Opa in these letters, it's that he rises to the challenge every time with a ridiculous amount of optimism and confidence. I didn't think I had that trait, but the more I look back at what I've been through and accomplished, the more I realize that I've been brave, confident, and resilient in my own way.
Posted by Sarah Snow at Monday, September 27, 2021