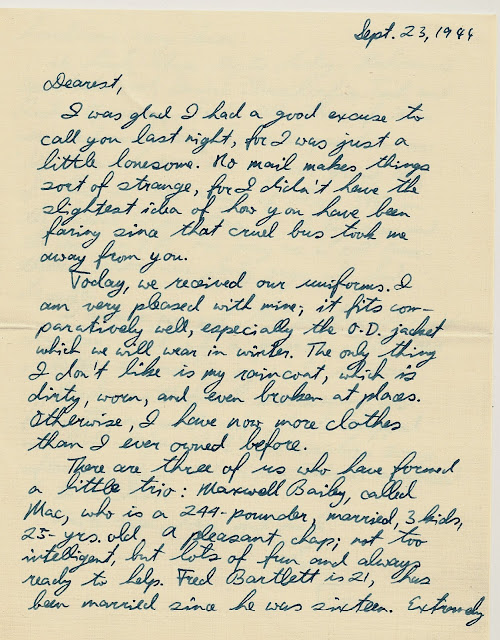 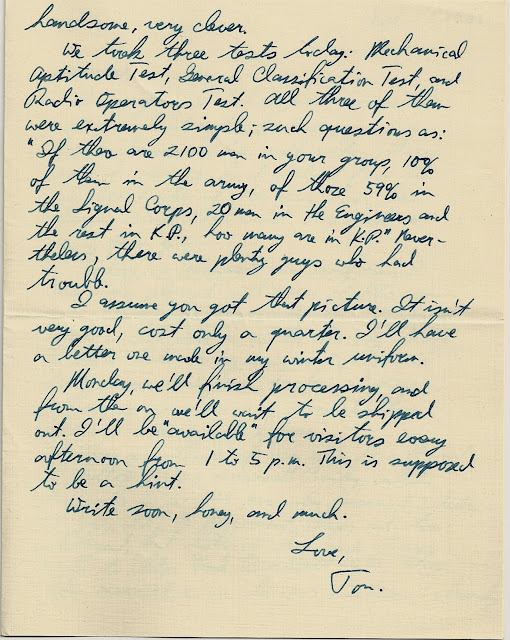 Letter from Opa to Grandmother, September 23, 1944.
Transcription:
Sept 23, 1944
Dearest,
I was glad I had a good excuse to call you last night, for I was just a little lonesome. No mail makes things sort of strange, for I didn't have the slightest idea of how you have been faring since that cruel bus took me away from you.
Today, we received our uniforms. I am very pleased with mine; it fits comparatively well, especially the O.D. jacket which we will wear in winter. The only thing I don't like is my raincoat, which is dirty, worn, and even broken at places. Otherwise, I have now more clothes than I ever owned before.
There are three of us who have formed a little trio: Maxwell Bailey, called Mac, who is a 244-pounder, married, 3 kids, 25-yrs old, a pleasant chap; not too intelligent, but lots of fun and always ready to help. Fred Bartlett is 21, has been married since he was sixteen. Extremely handsome, very clever.
We took three tests today: Mechanical Aptitude Test, General Classification Test, and Radio Operators Test. All three of them were extremely simple; such questions as: "If there are 2100 men in your group, 10% of them in the army, of those 59% in the Signal Corps, 20 men in the Engineers and the rest in K.P., how many are in K.P." Nevertheless, there were plenty guys who had trouble.
I assume you got that picture. It isn't very good, cost only a quarter. I'll have a better one made in my winter uniform.
Monday, we'll finish processing, and from then on we'll wait to be shipped out. I'll be "available" for visitors every afternoon from 1 to 5p.m. This is supposed to be a hint.
Write soon, honey, and much.
Love,
Tom.
Have I mentioned that my family (on the Doeppner side) is a bit intellectually snobby? Yeah. They are. It's a hard inheritance to shed. I don't know what to say about it other than it is helpful to see it so blatantly every now and then- as a reminder that this is part of my foundation and I need to work on it not being a thing.
When I read the part about Opa's raincoat, I couldn't help but wonder where this dirty, worn, broken coat had been. Where is the previous wearer? I admit, my mind got morbid and I just assumed that coat has seen battle and the wearer didn't make it. Or maybe it's way less intense than that, but that does seem odd that Opa would receive such a noticeably hand-me-down piece of military clothing. It's such a contrast from the rest of the scene with ample food and well-fitted uniforms.
Opa has already formed a small group of friends, the older married men in the group found each other. Both men sound interesting and like people I'd like to meet! I wonder if this friendship lasted any longer than their brief time here at Ft. Leavenworth.
Every time Opa says "shipped out," I imagine this dramatic scene at the sea shore when the huge ship of military men bravely wave goodbye before they embark on their journey to the war front. What it really means is being sent to his first assignment. Which at this juncture is likely boot camp. Does Opa know about boot camp? I imagine he does since Winton went into the service and stayed in touch.
I'm guessing things will shift a bit when he gets to boot camp.
Posted by Sarah Snow at Wednesday, September 15, 2021