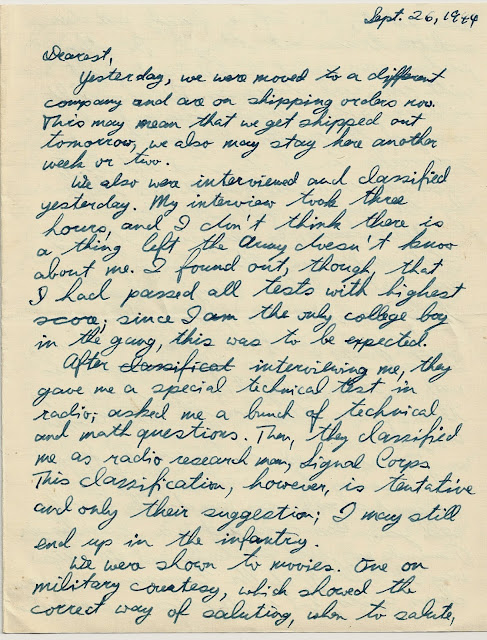 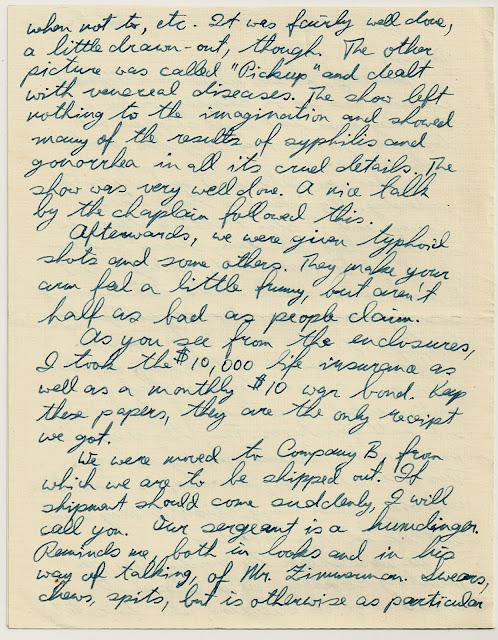 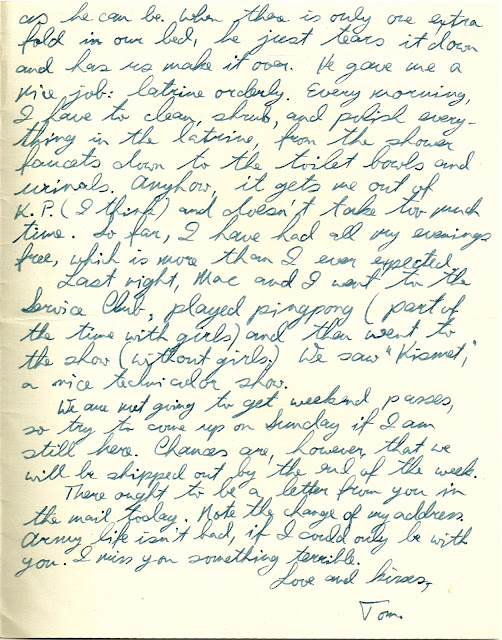 Letter from Opa to Grandmother, September 26, 1944.
Transcription:
Sept. 25, 1944
Dearest,
Yesterday, we were moved to a different company and are on shipping orders now. This may mean that we get shipped out tomorrow, we also may stay here another week or two.
We also were interviewed and classified yesterday. My interview took three hours, and I don't think there is a thing left the Army doesn't know about me. I found out, though, that I had passed all tests with highest score; since I am the only college boy in the gang, this was to be expected.
After interviewing me, they gave me a special technical test in radio; asking me a bunch of technical and math questions. Then, they classified me as radio research man, Signal Corps. This classification, however, is tentative and only their suggestion; I may still end up in the infantry.
We were shown two movies. One on military courtesy, which showed the correct way of saluting, when to salute, when not to, etc. It was fairly well done, a little drawn-out though. The other picture was called "Pickup" and dealt with venereal diseases. The show left nothing to the imagination and showed many of the results of syphilis and gonorrhea in all its cruel details. The show was very well done. A nice talk by the chaplain followed this.
Afterwards, we were given typhoid shots and some others. They make your arm feel a little funny, but aren't half as bad as people claim.
As you see from the enclosures, I took the $10,000 life insurance as well as a monthly $10 war bond. Keep these papers, they are the only receipt we got.
We were moved to Company B, from which we are to be shipped out. If shipment should come suddenly, I will call you. Our sergeant is a humdinger. Reminds me, both in looks and in his way of talking, of Mr. Zimmerman. Swears, chews, spits, but is otherwise as particular as he can be. When there is only one extra fold in our bed, he just tears it down and has us make it over. He gave me a nice job: latrine orderly. Every morning, I have to clean, scrub. and polish everything in the latrine, from the shower faucets down to the toilet bowls and urinals. Anyhow, it gets me out of K.P. (I think) and doesn't take too much time. So far, I have had all my evenings free, which is more than I ever expected.
Last night, Mac and I went to the Service Club, played pingpong (part of the time with girls) and then went to the show (without girls.) We saw "Kismet," a nice technicolor show.
We are not going to get weekend passes, so try to come up on Sunday if I am still here. Chances are, however, that we will be shipped out by the end of the week.
There ought to be a letter from you in the mail Today. Note the change of my address. Army life isn't bad, if I could only be with you. I miss you something terrible.
Love and kisses,
Tom.
The pace is picking up, with Opa now in an assigned company, on shipping orders, and with a potential classification. Opa wrote about this in more detail in his autobiography:

At Fort Leavenworth, Kansas, I was given a choice between Military Intelligence (probably because I spoke German and passable French,) and the Army Signal Corps. I figured that if I worked in Military Intelligence, I might have to spend the rest of the war translating German field manuals, while in the Signal Corps I would learn something related to my field. "No guarantees," they said...

I wonder if Opa told Grandmother about that choice or if he assumed her support (which she likely would have given). It makes sense that Opa would choose the classification that more closely matched his education and aptitude.

I hadn't realized Opa was the only college kid in the group. That's kind of amazing, and also likely why he was getting so much attention and praise from the officers. I guess it was late enough in the war that he didn't raise any suspicions of allegiance; to enlist in the Army at the lowest rank towards the end of the war would be a poor spy technique.

I had the "pleasure" of watching the old Army video on venereal diseases, and let me tell you, Opa is not kidding about them leaving nothing to the imagination. SO many pictures of diseased genitals in that video. They approach it from the assumption that all Army men are perfect sweethearts who are potential targets for harlots and seemingly sweet yet disease-infested women. As far as a teaching technique, it's not bad. Even more convincing were those photos. Woah.

I cannot imagine what the chaplain had to say that didn't feel weird after that.

Opa's experience with his new sergeant is a great indicator of how age and maturity are his best friends. He has seen this type before, and he knows how to live with it. His perspective on latrine duty is another indicator of his hard-earned wisdom (and cleverness), he knows that no one would volunteer for this service, but it takes less time and is somehow less terrible than K.P. (Kitchen Patrol), perhaps because of the time it takes? I hate cleaning bathrooms. Opa happily accepts his "low" assignment, because he knows it's all about perspective. He does a good job and doesn't complain, the grumpy sergeant is pleased, and Opa has his evenings free to write his wife.

I couldn't help but laugh when I read Opa's obligatory confession and follow up assertion of when he had fraternized with and without girls. He's transparent, showing Grandmother he can be trusted.

Opa misses Grandmother. The Army life is picking up, but his married life feels a little bit like it's on hold.