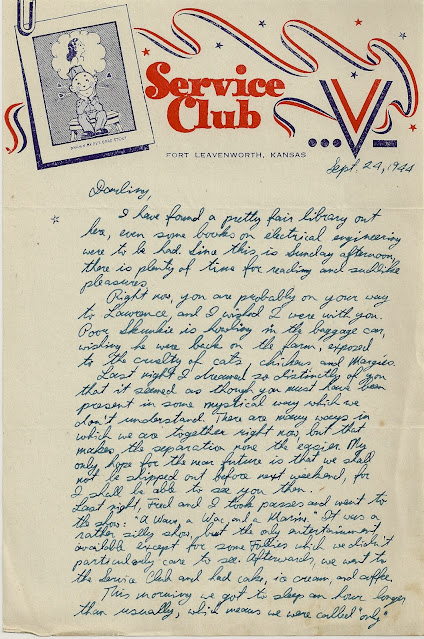 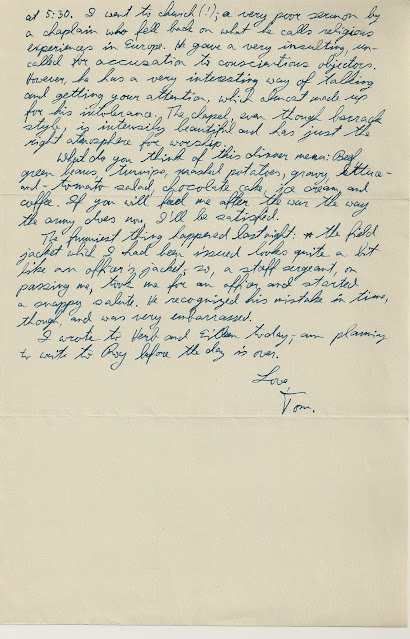 Letter from Opa to Grandmother, September 24, 1944.
Transcription:
Sept. 24, 1944
Darling,
I have found a pretty fair library out here, even some books on electrical engineering were to be had. Since this is a Sunday afternoon, there is plenty of time for reading and such like pleasures.
Right now, you are probably on your way to Lawrence, and I wished I were with you. Poor Skunkie is howling in the luggage car, wishing he were back on the farm, exposed to the cruelty of cats, chickens, and Margies.
Last night I dreamed so distinctly of you that it seemed as though you must have been present in some mystical way which we don't understand. There are many ways in which we are together right now, but that makes the separation none the easier. My only hope for the near future is that we shall not be shipped out before next weekend, for I shall be able to see you then.
Last night, Fred and I took passes and went to the show: "A Wave, a Wac, and a Marine." It was a rather silly show, but the only entertainment available except for some Follies which we didn't particularly care to see. Afterwards, we went to the Service Club and had cake, ice cream, and coffee.
This morning we got to sleep an hour longer than usually, which means we were called "only" at 5:30. I went to church(!); a very poor sermon by a chaplain who fell back on what he calls religious experiences in Europe. He gave a try insulting, uncalled for accusation to conscientious objectors. However, he has a very interesting way of talking and getting your attention, which almost made up for his intolerance. The chapel, even though barrack style, is intensely beautiful and has just the right atmosphere for worship.
What do you think of this dinner menu: Beef, green beans, turnips, mashed potatoes, gravy, lettuce-and-tomato salad, chocolate cake, ice cream and coffee. If you will feed me after the war the way the army does now, I'll be satisfied.
The funniest thing happened last night: the field jacket which I had been issued looks quite a lot like an officer's jacket; so, a staff sergeant, on passing me, took me for an officer and started a snappy salute. He recognized his mistake in time, though, and was very embarrassed.
I wrote to Herb and Eileen today; am planning to write to Ray before the day is over.
Love,
Tom.
Opa wrote to Grandmother, mentioning her trip from her home farm back to Lawrence, where she was working at the University and in grad school. I thought about the strange way we revert to our childhood roles and even mannerisms when we are home with our parents. It's not always a bad thing, but it's not always a good thing, either. It must have felt strange for Grandmother, straddling home and adulthood. Were her parents still disapproving of Opa? Did they talk to her about it? I doubt it since she was now married and they wouldn't have wanted her to have a failed marriage. It must have been a bit of a whiplash for her. I wish we had her letters to get insight into how she was feeling during this time.
I love how Opa mentioned the mystical-like connection between himself and Grandmother. His dream of her felt so real.... he wonders if in some other realm it may have been real. I don't know what to call it other than mystical, but I have had similar experiences; when I feel connected to someone or present to them in a way that is more than just a feeling or hope. It feels real and present. These experiences are gifts. I have felt this way about Ella, while reading her letters, feeling like I was somehow present with her in a realm unconfined by time. It feels so real that I have to remember we never met. Then I wonder if maybe somehow we have. (See: mystical.)
The fact that Opa went to church voluntarily proves on some level that although he did not accept religion as a whole, he was always curious and open to learning something new. This chaplain sounds unfortunately very typical. I would have been a terrible military chaplain (if they allowed deaf chaplains to serve). I think it would be very difficult for me to counsel and serve a group of people who were in the process of being trained and indoctrinated in American patriotism and warfare. Those are not strong pulls for me. I love that Opa is still defending conscientious objectors. He hasn't forgotten his roots or his friends. Everyone has their reasons for where they go in life and what they choose, and that chaplain didn't need to judge others in order to support the troops in front of him. That's tacky.
Opa still finds time to write his friends, keeping up with them in a way he cannot keep up with friends and family from Germany. He told Grandmother he would write Ray, I'm assuming her older brother Ray.
Opa is certainly enjoying Army food, and I can't help but notice that his listed menus are mirrored in many menus at retirement and nursing homes across the US today. From the green beans all the way to chocolate cake. I hope it gives some of the residents the same joy it gave Opa in his early Army days.
Posted by Sarah Snow at Friday, September 17, 2021