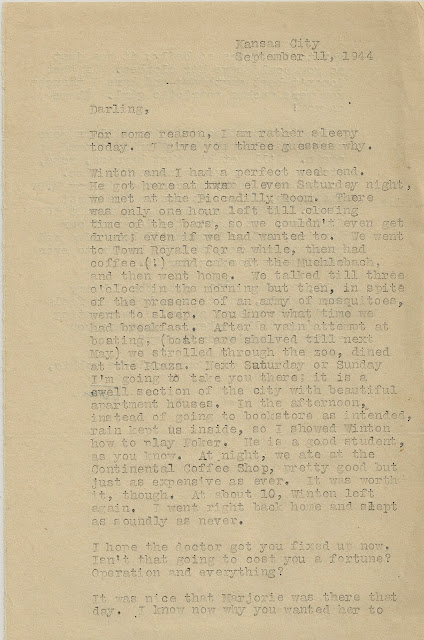 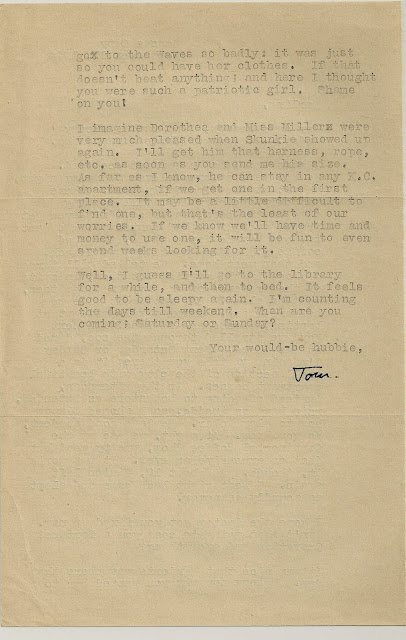 Letter from Opa to Grandmother, September 11, 1944.
Transcription:
Kansas City
September 11, 1944.
Darling,
For some reason, I am rather sleepy today. I give you three guesses why.
Winton and I had a perfect weekend. He got here at eleven Saturday night, we met at the Piccadilly Room. There was only one hour left till closing time of the bars, so we couldn't even get drunk; even if we had wanted to. We went to Town Royale for a while, then had coffee (!) and cake at the Muehlebach, and then went home. We talked till three o'clock in the morning but then, in spite of the presence of an army of mosquitoes, went to sleep. You know what time we had breakfast. After a vain attempt at boating, (boats are shelved till next May) we strolled through the zoo, dined at the Plaza. Next Saturday or Sunday I'm going to take you there; it is a swell section of the city with beautiful apartment houses. In the afternoon, instead of going to bookstore as intended, rain kept us inside, so I showed Winton how to play poker. He is a good student, as you know. At night we ate at the Continental Coffee Shop, pretty good but just as expensive as ever. It was worth it, though. At about 10, Winton left again. I went right back home and slept as soundly as never.
I hope the doctor got you fixed up now. Isn't that going to cost you a fortune? Operation and everything?
It was nice that Marjorie was there that day. I know now why you wanted her to go to the Waves so badly: it was just so you could have her clothes. If that doesn't beat anything; and here I thought you were such a patriotic girl. Shame on you!
I imagine Dorothea and Miss Miller were very much pleased when Skunkie showed up again. I'll get him that harness, rope, etc. as soon as you send me his size. As far as I know, he can stay in any K.C. apartment, if we get one in the first place. It may be a little difficult to find one, but that's the least of our worries. If we know we'll have time and money to use one it will be fun to even spend weeks looking for it.
Well, I guess I'll go to the library for a while, and then to bed. It feels good to be sleepy again. I'm counting the days till weekend. When are you coming; Saturday or Sunday?
Your would-be hubbie,
Tom.
Opa must have struggled with some bouts of insomnia due to all the stress he had. He got to have a long weekend with a good friend, filled with staying up almost all night talking. But finally he was sleepy.
I love this intimate insight into a male friendship. Often in movies and other fictional (or even real) depictions of friendship between men, you don't see this kind of "stay up til 3am talking" storyline. It's "got drunk and passed out playing poker." We should know that the talking is happening, but I swear we only think it's possible if they are drunk or playing a game. Sounds like Opa and Winton were neither. (Not that there's anything inherently wrong with a game and drinks.) I wish there were more "bro-scenes" like this.
I'm wondering why Opa has an army of mosquitos inside his home. Maybe that's why he's had trouble sleeping.
Opa's mention about Grandmother's operation costing a fortune, I about spat out "you think that THEN!" I have good health insurance and I just had two MRIs (at basically the same time) and I now am on a payment plan to pay for them. AFTER insurance I owed around $1200. It's frustrating.
It sounds like everything worked out OK with Grandmother's surgery, especially since she should be well enough to travel to see Opa the next weekend.
Opa better catch up on his sleep while he can sleep "as soundly as never."
Posted by Sarah Snow at Monday, August 30, 2021