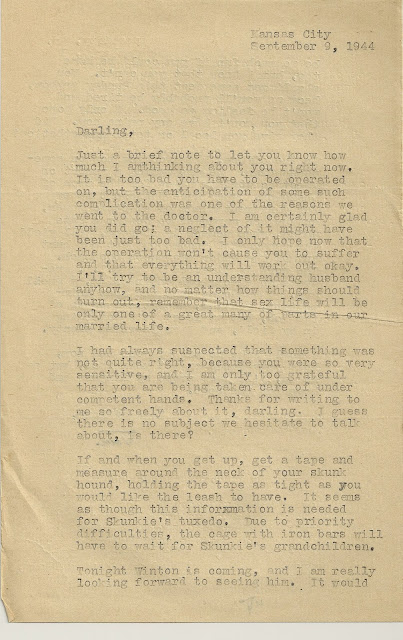 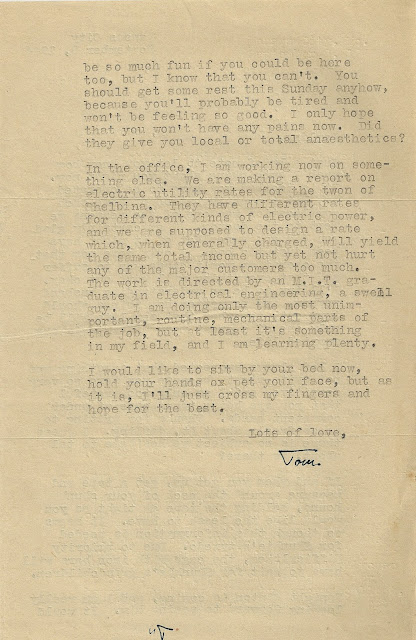 Letter from Opa to Grandmother September 9, 1944.
Transcription:
Kansas City
September 9, 1944
Darling,
Just a brief note to let you know how much I am thinking about you right now. It is too bad you have to be operated on, but the anticipation of some such complication was one of the reasons we went to the doctor. I am certainly glad you did go; a neglect of it might have been just too bad. I only hope now that the operation won't cause you to suffer and that everything will work out okay. I'll try to be an understanding husband anyhow, and no matter how things should turn out, remember that sex life will be only one of a great many of parts in our married life.
I had always suspected that something was not quite right, because you were so very sensitive, and I am only too grateful that you are being taken care of under competent hands. Thanks for writing so freely about it, darling. I guess there is no subject we hesitate to talk about, is there?
If and when you get up, get a tape and measure around the neck of your skunk hound, holding the tape as tight as you would like the leash to have. It seems as though this information is needed for Skunkie's tuxedo. Due to priority difficulties, the cage with iron bars will have to wait for Skunkie's grandchildren.
Tonight Winton is coming, and I am really looking forward to seeing him. It would be so much fun if you could be here too, but I know that you can't. You should get some rest this Sunday anyhow because you'll probably be tired and won't be feeling so good. I only hope that you won't have any pains now. Did they give you local or total anaesthetics?
In the office, I am working now on something else. We are making a report on electric utility rates for the town of Shelbina. They have different rates for different kinds of electric power, and we are supposed to design a rate which, when generally charged, will yield the same total income but yet not hurt any ion the major customers too much. The work is directed by an M.I.T. graduate in electrical engineering, a swell guy. I am doing only the most unimportant, routine, mechanical parts of the job, but at least it's something in my file, and I am learning plenty.
I would like to sit by your bed now, hold your hands or pet your face, but as it is, I'll just cross my fingers and hope for the best.
Lots of love,
Tom.
In sickness and in health. Opa is doing well in his practice for his future vows. This is a personal letter and a personal topic, but I think it's worth sharing.
It shows me that Grandmother and Opa were able to talk about things that were considered taboo. Their relationship was intimate, caring, and respectful. I wonder if Grandmother had fibroids or something. If she needed surgery it was more than just discomfort.
I actually googled common obstetric disorders that caused discomfort and google wasn't super helpful. Almost everything that pulled up at first was about pregnancy- which is pretty typical of women's healthcare. If it doesn't happen during pregnancy, we don't really care. When I finally got narrowed down enough that I had some usable information, one article mentioned that it was hard to know how many women suffered from some of these disorders because they were embarrassed to mention it. It occurred to me how ridiculous that is. We are embarrassed, but why should we be?! It's frustrating that we are still struggling to write or speak freely about the female body in ways that affirms, cares, and respects.
I'm so glad Grandmother had Opa and felt comfortable with him. If you knew their personalities, you would know that this vulnerability was not intuitive for either of them. The fact that they found this with each other is special. I am surprised to learn  how many women cannot be so free and vulnerable with their spouses.
If you can't talk about your vulva, you might want to keep looking.
Posted by Sarah Snow at Wednesday, August 25, 2021