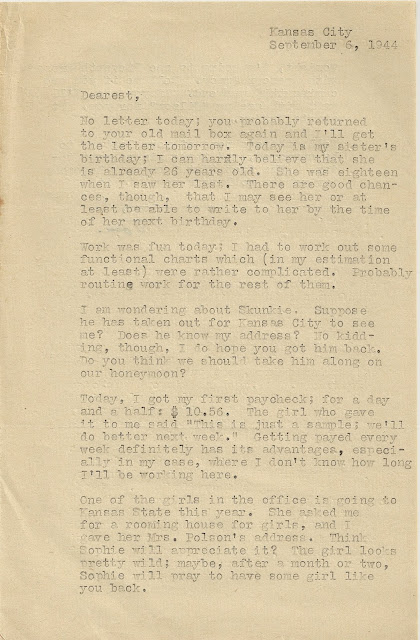 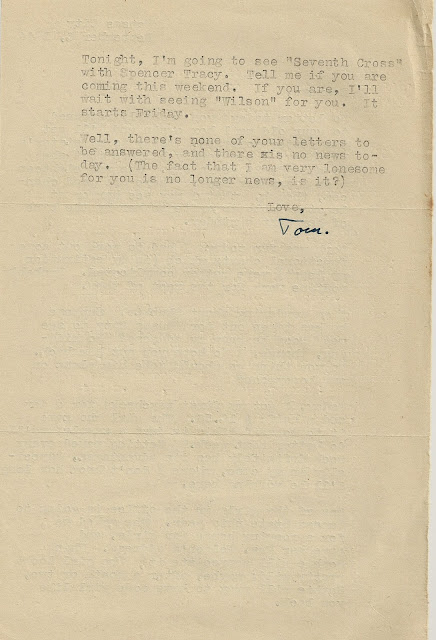 Letter from Opa to Grandmother, September 6, 1944.
Transcription:
Kansas City,
September 6, 1944
Dearest,
No letter today; you probably returned to your old mail box again and I'll get the letter tomorrow. Today is my sister's birthday; I can hardly believe that she is already 26 years old. She was eighteen when I saw her last. There are good chances though, that I may see her or at least be able to write to her by the time of her next birthday.
Work was fun today; I had to work out some functional charts which (in my estimation at least) were rather complicated. Probably routine work for the rest of them.
I am wondering about Skunkie. Suppose he has taken out for Kansas City to see me? Does he know my address? No kidding, though, I do hope you got him back. Do you think we should take him along on our honeymoon?
Today, I got my first paycheck; for a day and a half: $10.56. The girl who gave it to me said "This is just a sample; we'll do better next week." Getting payed every week definitely has its advantages, especially in my case, where I don't know how long I'll be working here.
One of the girls in the office is going to Kansas State this year. She asked me for a rooming house for girls, and I gave her Mrs. Polson's address. Think Sophie will appreciate it? The girl looks pretty wild; maybe, after a month of two, Sophie will pray to have some girl like you back.
Tonight, I'm going to see "Seventh Cross" with Spencer Tracy. Tell me if you are coming this weekend. If you are, I'll wait with seeing "Wilson" for you. It starts Friday.
Well, there's none of your letters to be answered, and there is no news today. (The fact that I am very lonesome for you is no longer news, is it?)
Love,
Tom.
I love to see the hint of humility in Opa in this letter. He talks about doing some complex work that was challenging, but likely routine for others. He had pride in working on it, but humility that he wasn't the smartest guy on the block.
That humility is not really a part of my family tradition, for better or worse. I want to pretend we don't all suffer from a case of superiority, but it's true. Well, not for my whole family, but let me just say that the Doeppner gene is strong on the confidence. It's done us well many times, but I have definitely had moments of humility that threw me back hard. I'm amazing at being humble now, though, so don't worry. (Lame joke - I couldn't help it.)
When Opa wrote that he hadn't seen his sister since she was 18, I remembered that she had left Germany about a year before he had, for college in Paris. So it has been eight years since he saw her last. Opa is hoping for a reunion by her next birthday. Or at least to be able to write her. I think he assumes she is OK. Does he wonder? Or does he just assume the best until he knows otherwise?
Opa seemed good at not worrying, or at least not showing his worry. This is a good trait to have in this time. Opa had specific goals to help him focus on the things he could manage: school, job, staying in the US. When he lost his job and was threatened with deportation, I can see why he really got depressed. He hadn't just lost what he was working for, he lost a focus, his distraction. Once he could not control his steady progress toward citizenship and life with Grandmother, everything spiraled. Everything that was hard and frustrating and out of his control - it all resurfaced. He was helpless without anything to pour his energy into.
That's why this challenging task at work was so life giving. It kept the heavy burden of the unknown and uncontrollable out of his mind.
Posted by Sarah Snow at Thursday, August 19, 2021