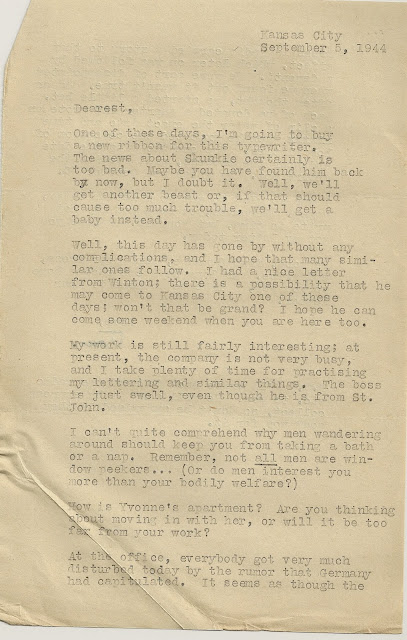 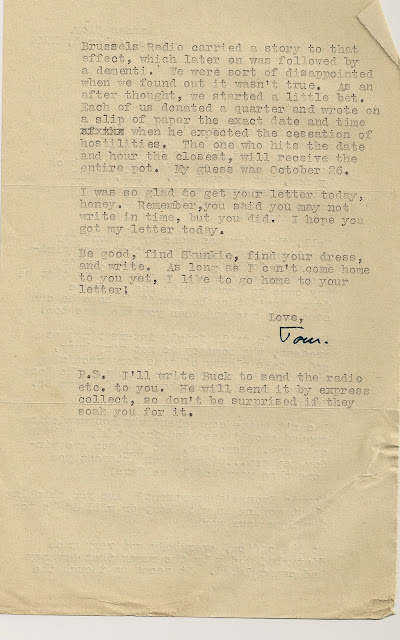 Letter from Opa to Grandmother, September 5, 1944.
Transcription:
Kansas City
September 5, 1944
Dearest,
One of these days, I'm going to buy a new ribbon for this typewriter. The news about Skunkie certainly is too bad. Maybe you have found him back by now, but I doubt it. Well, we'll get another beast, or, if that should cause too much trouble, we'll get a baby instead.
Well, this day has gone by without any complications, and I hope that many similar ones follow. I had a nice letter from Winton; there is a possibility that he may come to Kansas City one of these days; won't that be grand? I hope he can come some weekend and when you are here too.
My work is still fairly interesting; at present, the company is not very busy, and I take plenty of time for practicing my lettering and similar things. The boss is just swell, even though he is from St. John.
I can't quite comprehend why men wandering around should keep you from taking a bath or a nap. Remember, not all men are window seekers... (Or do men interest you more than your bodily welfare?)
How's Yvonne's apartment? Are you thinking about moving in with her, or will it be too far from work?
At the office, everybody got very much disturbed today by the rumor that Germany had capitulated. It seems as though the Brussels Radio carried a story to that effect, which later on was followed by a dementi. We were sort of disappointed when we found out it wasn't true. As an after thought, we started a little bet. Each of us donated a quarter and wrote on a slip of paper the exact date and time when he expected the cessation of hostilities. The one who hits the date and hour the closest, will receive the entire pot. My guess was October 26.
I was so glad to get your letter today, honey. Remember, you said you may not write in time, but you did. I hope you got my letter today.
Be good, find Skunkie, find your dress, and write. As long as I don't come home to you yet, I like to go home to your letter!
Love,
Tom.
P.S. I'll write Buck to send the radio etc. to you. He will send it by express collect, so don't be surprised if they soak you for it.
Can you imagine being Opa and hearing a radio report that Germany had capitulated?! I can't imagine. Although I do believe news like that is always met with some level of caution.
Anything that sounds too good to be true, we hold it at arms length for at least a minute before we allow ourselves to believe it. I do this a lot, to the point where even if something turns out to be true, I still have my suspicion radar on and can't fully appreciate it. We really like to sabotage ourselves don't we?!
I keep getting the feeling that everyone expected the war to be over much sooner than it actually was. I wonder if this was just wishful thinking, or if things did actually linger longer than folks (even the in charge folks) thought it would. Opa, who has been pretty on target with his estimates, bet that the war would be over in October 1944. Unfortunately for his family and millions of people, there was still another winter and spring to go before the war would cease. Then of course even longer for the war in the pacific to abate.
Sounds like work is going OK and Opa's past life isn't haunting him just yet. It's amazing how quickly he falls in to the culture of a work place, already placing bets around the cooler.
Opa's use of the phrase "not all men" certainly did not carry the same weight it does now, but I couldn't help but notice it. It's actually the same exact thing that women are frustrated about now. For whatever reason Grandmother doesn't feel comfortable taking a bath or napping because of men wandering around. I don't know if she was serious or just poking fun at Opa (it doesn't seem like the kind of thing she would poke fun of). Either way, here comes Opa "not all men"-splaining. Bless it.
Listen Opa- and ALL men: if one woman feels like she can't take a nap or bathe herself- the problem is not her or her "perception." It's men. And those "not all men" need to get the other men in line. Also, the focus should not be on the good men. That's not helpful. Does it help me to know that seven tigers are actually sweet snuggly bugs? Not when I'm in the jungle with 17 wandering around. Weird analogy, but I think y'all catch my drift. The *only* thing that "not all men" solves is your own guilt or reputation. Great, now can we move on to the actual problem at hand?
Bless it. Not all men in 1944.
Posted by Sarah Snow at Thursday, July 01, 2021