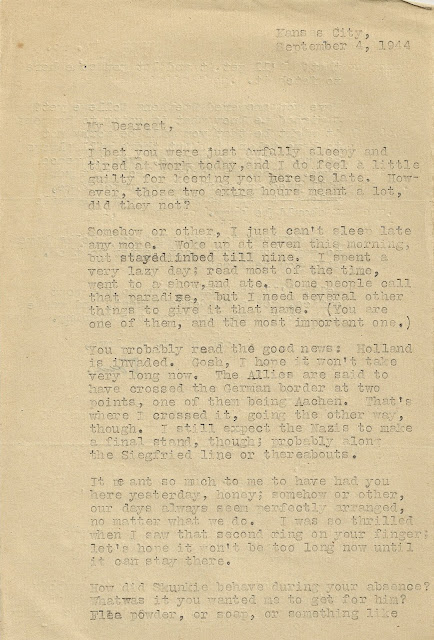 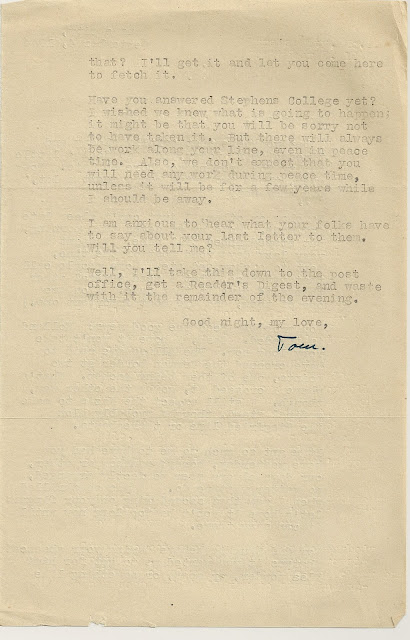 Letter from Opa to Grandmother September 4, 1944.
Transcription:
Kansas City,
September 4, 1944
My Dearest,
I bet you were just awfully sleepy and tired at work today, and I do feel a little guilty for keeping you here so late. However, those two extra hours meant a lot, did they not?
Somehow or other, I just can't sleep late anymore. Woke up at seven this morning, but stayed in bed till nine. I spent a very lazy day; read most of the time, went to a show, and ate. Some people call that paradise, but I need several other things to give it that name. (You are one of them, and the most important one.)
You probably read the good news: Holland is invaded. Gosh I hope it won't take very long now. The Allies are said to have crossed the German border at two points, one of them being Aachen. That's where I crossed it, going the other way, though. I still expect the Nazis to make a final stand, though; probably along the Siegfried line or thereabouts.
It meant so much to me to have had you here yesterday, honey; somehow or other, our days always seem perfectly arranged, no matter what we do. I was so thrilled when I saw that second ring on your finger; let's hope it won't be too long now until it can stay there.
How did Skunkie behave during your absence? What was it you wanted me to get for him? Flea powder, or soap, or something like that? I'll get it and let you come here to fetch it.
Have you answered Stephens College yet? I wished we knew what is going to happen; it might be that you will be sorry not to have taken it. But there will always be work along your line, even in peace time. Also, we don't expect that you will need any work during peace time, unless it will be for a few years while I should be away.
I am anxious to hear what your folks have to say about your last letter to them. Will you tell me?
Well, I'll take this down to the post office, get a Reader's Digest, and waste with it the remainder of the evening.
Good night, my love,
Tom.
Opa is so much better after spending time with Grandmother. He doesn't know what's going to happen to him, but right now he knows whatever happens, she'll be there.
For that reason alone, he can breathe.
The Allies are making headway, but as we all know, it will be a long time still until the war is over. I loved Opa's quip that he was near there, but walking "the other way." Opa's dad, August, lives north-west on the opposite side of Holland near Amsterdam, so he isn't getting the benefit of the recent Allied victories. In fact, things are about to get pretty hard for him and Emma (Opa's step-mom).
Opa and Grandmother picked out her wedding ring! I'm guessing that letter to her parents was something along the lines of "no, seriously, we're actually going to get married." It was no secret to us growing up that Grandmother's parents didn't approve of her marriage to Opa, but that he won their hearts fairly soon (so they told us).
Can't say I blame her parents, Opa has not been able to hold a job long, he got fined for window-peeking, he's from Berlin (not only German but a big city boy German), and he's not particularly religious. Oh and his parents are divorced and his step-mom is also his second cousin.
I'd be wary too.
Shows how easy it is to misjudge someone!
Have you ever met someone after writing them off in your head and realized how wrong you were about them?
Posted by Sarah Snow at Friday, June 11, 2021