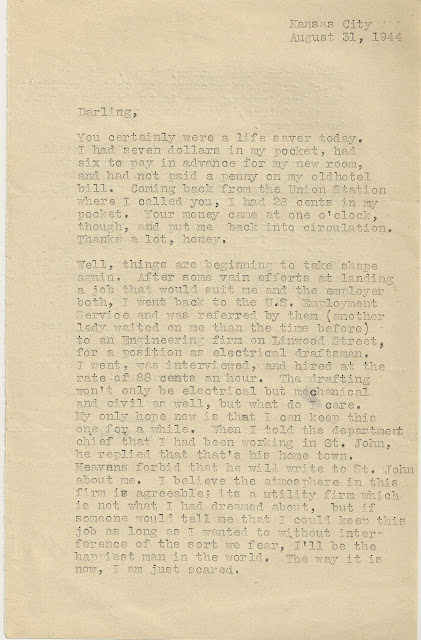 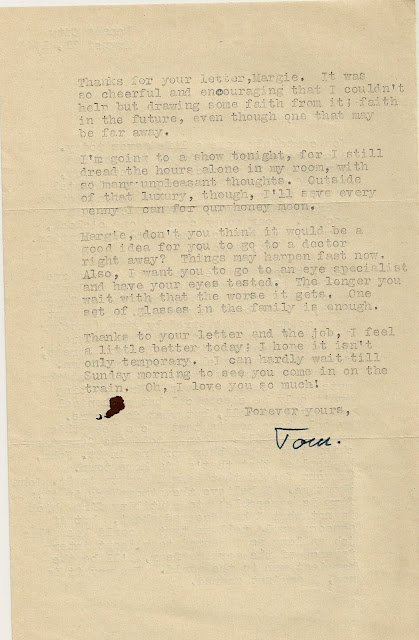 Letter from Opa to Grandmother, August 31, 1944.
Transcription:
Kansas City ...
August 31, 1944
Darling,
You certainly were a life saver today. I had seven dollars in my pocket, had six to pay in advance for my new room, and had not paid a penny on my old hotel bill. Coming back from the Union Station where I called you, I had 28 cents in my pocket. Your money came at one o'clock, though, and put me back into circulation. Thanks a lot, honey.
Well, things are beginning to take shape again. After some vain efforts at landing a job that would suit me and the employer both, I went back to the U.S. Employment Service and was referred by them (another lady waited on me than the time before) to an Engineering firm on Linwood Street, for a position as electrical draftsman. I went, was interviewed, and hired at the rate of 88 cents an hour. The drafting won't only be electrical but mechanical and civil as well, but what do I care. My only hope now is that I can keep this one for a while. When I told the department chief that I had been working in St. John, he replied that that's his home town. Heavens forbid that he will write to St. John about me. I believe the atmosphere in the firm is agreeable; its a utility firm which is not what I had dreamed about, but if someone would tell me that I could keep this job as long as I wanted to without interference of the sort we fear, I'll be the happiest man in the world. The way it is now, I am just scared.
Thanks for your letter, Margie. It was so cheerful and encouraging that I couldn't help but drawing some with from it; with in the future, even though one that may be far away.
I'm going to a show tonight, for I still dread the hours alone in my room, with so many unpleasant thoughts. Outside of that luxury, though I'll save every penny I can for our honey moon.
Margie, don't you think it would be a good idea for you to go to a doctor right away? Things might happen fast now. Also, I want you to go to an eye specialist and have your eyes tested. The longer you wait with that the worse it gets. One set of glasses in the family is enough.
Thanks to your letter and the job, I feel a little better today; I hope it isn't only temporary. I can hardly wait till Sunday morning to see you come in on the train. Oh, I love you so much!
Forever yours,
Tom.
Opa is making his way out of his despair.
He landed a job! It's not his dream job, it's not as much as the last job paid, but it's a job in his field. At this point, all Opa wants is to keep a job and not be bothered.
His mood is much better, but his fears are still heavy in his mind. He allows himself the luxury of shows to keep his mind and worries at bay. Solidarity, Opa. Solidarity. There's a reason "shows" are still very much a thing.
If Opa didn't have the support and financial help from Grandmother, he would have been pretty up a creek (or up a crick, as my Virginia southern family would say). Reminds me how small support to bridge the gap can be a life-saver.
Posted by Sarah Snow at Wednesday, June 09, 2021