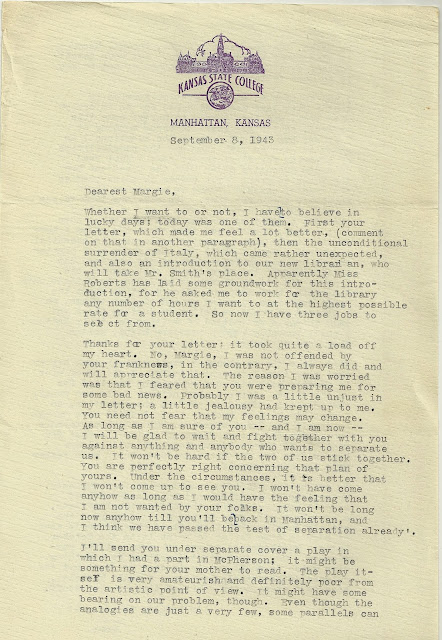 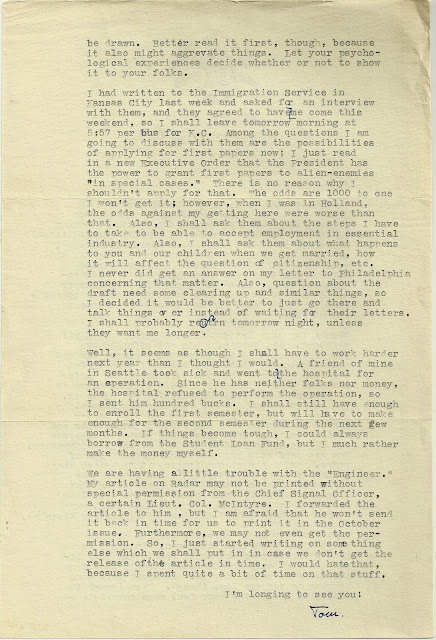 Whether I want to or not, I have to believe in lucky days; today was one of them. First your letter, which made me feel a lot better, (comment on that in another paragraph), then the unconditional surrender of Italy, which came rather unexpected, and also an introduction to our new librarian, who will take Mr. Smith's place. Apparently Miss Roberts has laid some groundwork for this introduction, for he asked me to work for the library any number of hours I want to at the highest possible rate for a student. So now I have three jobs to select from.

Thanks for your letter: it took quite a load off my heart. No, Margie, I was not offended by your frankness, in the contrary, I always did and will appreciate that. The reason I was worried was that I feared that you were preparing me for some bad news. Probably I was a little unjust in my letter; a little jealousy had kept up to me. You need not fear that my feelings may change. As long as I am sure of you -- and I am now -- I will be glad to wait and fight together with you against anything and anybody who wants to separate us. It won't be hard if the two of us stick together. You are perfectly right concerning that plan of yours. Under the circumstances, it is better that I won't come up to see you. I won't have come anyhow as long as I would have the feeling that I am not wanted by your folks. It won't be long now anyhow till you'll be back in Manhattan, and I think we have passed the test of separation already.

I'll send you under separate cover a play in which I had a part in McPherson; it might be something for your mother to read. The play itself is very amateurish and definitely poor from the artistic point of view. It might have some bearing on our problem, though. Even though the analogies are just a very few, some parallels can be drawn. Better read it first, though, because it also might aggrevate things. Let your psychological experiences decide whether or not to show it to your folks.

I had written to the Immigration Service in Kansas City last week and asked for an interview with them, and they agreed to have me come this weekend, so I shall leave tomorrow morning at 5:57 per bus for K.C. Among the questions I am going to discuss with them are the possibilities of applying for first papers now; I just read in a new Executive Order that the President has the power to grant first papers to alien-enemies "in special cases." There is no reason why I shouldn't apply for that. The odds are 1000 to one I won't get it; however, when I was in Holland, the odds against my getting here were worse than that. Also, I shall ask them about the steps I have to take to be able to accept employment in essential industry. Also, I shall ask them about what happens to you and our children when we get married, how it will affect the question of citizenship, etc. I never did get an answer on my letter to Philadelphia concerning that matter. Also, a question about the draft need some clearing up and similar things, so I decided it would be better to just go there and talk things over instead of waiting for their letters. I shall probably return tomorrow night, unless they want me longer.

Well, it seems as though I shall have to work harder next year than I thought I would. A friend of mine in Seattle took sick and went to the hospital for an operation. Since he has neither folks nor money, the hospital refused to perform the operation, so I sent him hundred bucks. I shall still have enough to enroll the first semester, but will have to make enough for the second semester during the next few months. If things become tough, I could always borrow from the Student Loan Fund, but I much rather make the money myself.

We are having a little trouble with the "Engineer." My article on Radar may not be printed without special permission from th e Chief Signal Officer, a certain Lieut. Col. McIntyre. I forwarded the article to him, but I am afraid that he won't send it back in time for us to print it in the October issue. Furthermore, we may not even get the permission. So, I just started writing on some thing else which we shall put in in case we don't get the release of the article in time. I would hate that, because I spent quite a bit of time on that stuff.

I'm longing to see you!
Tom.

I try to remind myself of the rich blessing it is to learn that your Grandfather was a really good man, even in private. In my luxury of letters, I forget that this is not normal. For me to have evidence of Opa's goodness, as 23 year old man writing to his fiance in 1943.

Opa was not intimidated by Grandmother's candor, nor did he  hold back his own feelings and opinions. He respected her. You know, it's interesting, my Dad can say some of the most ridiculous sexist stuff ever- but he has never and would never disrespect my mother. And same goes for his daughters- he never told us that we couldn't do something because we were girls. He learned that from Opa.

Opa's generosity pops up here too. I remember hearing about this loan to his friend in Seattle, I think his roommate's wife told us about it when we interviewed her. My guess is that this friend is also a refugee. Opa gives $100, today's equivalent of $1,418.50 to his friend in need of surgery. That's a chunk of change! As a child, I was very generous, I think I still am but perhaps less innocently. I have heard many stories of Opa's generosity. Renate, his cousin, tells of when he sent money to Germany to her mother who was struggling. Then there's the fact that Opa and Grandmother single-handedly paid for the college tuition of myself and my two sisters.

Opa's meeting with the INS agent should be fascinating. I'm anxious to hear about it, he's got a lot of questions! I'm most interested to hear about the marriage question and the draft question. He doesn't really specify about the draft and what he wants to know about it. Perhaps he is concerned that gaining American citizenship or going after it would require that he sign up for the draft? Till now, we have only heard of his pacifist views (other than his advice on how Americans can win the war). He seems to be shifting, but is he shifting to the point that he wants to join the military?

For Opa, lucky means hearing from his fiance, getting another opportunity for work, Italy's surrender, and helping a friend. For me, a lucky day is when you realize what a good man your grandfather was.
Posted by Sarah Snow at Saturday, October 14, 2017